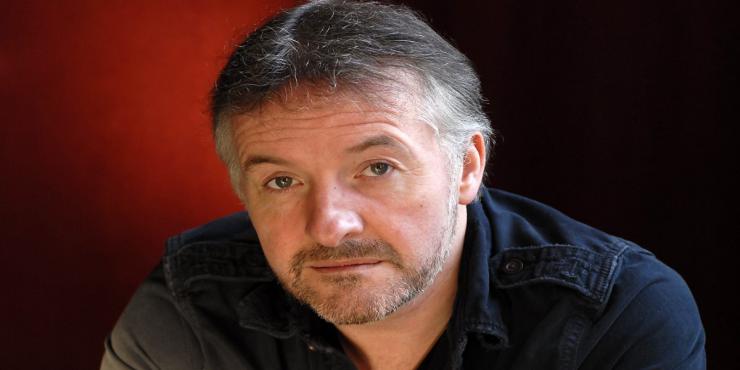 John Connolly is an Irish writer and the internationally bestselling author of the Charlie Parker novels, The Book of Lost Things, The Samuel Johnson Adventures and many more.

John has won a number of literary prizes for his work, including the Edgar, Shamus and Anthony awards and CWA Dagger. His latest book The Dirty South is published in April.

Like a lot of kids, I was first exposed to reading through Enid Blyton and my first solo reading experience involved painstakingly working my way phonetically through the longer words in a Secret Seven novel. After that, I was hooked: John Christopher, Alistair MacLean, Doctor Who novelisations, Ian Fleming, H.G. Wells. I also had a huge affection for Eric Thompson’s anthologies of Magic Roundabout stories, which I’m sure fed into my own Samuel Johnston books. I actually re-read those Thompson stories recently and they’re still wonderfully funny.

2. Charlie Parker has been part of your and our lives since Every Dead Thing appeared in 1999. How do you view him 21 years later? Is he easier or more difficult to write now?

I’ve allowed him to grow older, so the characters have changed as I’ve changed. In that way, I don’t feel disconnected from him. It was strange, in a way, going back to the younger Parker to write The Dirty South, because he doesn’t yet have that life experience or even some of the consolations that have been allowed him in the later novels. He’s just angry, violent and mired in grief. Writing him in that form was a challenge, which is probably why I decided to do it.

With each book, I still try to do something that I haven’t done before, even within the confines of a series. As I once said to my editors, every book should carry with it the risk of failure, or else it really isn’t worth writing.

It’s a reaction to A Book of Bones, which moved across different countries and time periods, with a huge cast of characters. (Each book tends to be a reaction to the one that went before.) It’s set in one small county in Arkansas – mostly in the environs of one small town – with a relatively compact cast of characters. It’s also a Western, of a kind; it mentions Louis L’Amour quite early on.

Finally, I suppose, no-one in the book is spectacularly evil in the way some of the characters in the other Parker books might have been. People do terrible things in The Dirty South, but what’s most frightening is that they can find a way to justify those actions to themselves, and an entire community can be persuaded to become complicit in them.

4. You have often namechecked Ross Macdonald as an influence on your writing. How did you discover him and where would be a good place to start for anyone wanting to read more?

I was fortunate enough to be on the first elective course in Detective Fiction at Trinity College Dublin when I was an undergraduate. That was my introduction to Macdonald, who is just the most subtle of the four great Californian crime novelists (alongside Hammett, Chandler and Cain) and the first poet of empathy in the genre. I love The Chill (1964), which has a brilliant twist at the end, and The Doomsters (1958) is really eerie.

5. I really enjoyed your novel He about Stan Laurel. How did your interest in him develop?

I had just loved Laurel & Hardy, ever since childhood, but knew very little about them. It was only when a friend of mine mentioned that he had met Stan Laurel toward the end of his life, when he was living in Santa Monica, that I began to wonder what he had been doing for all those years. The more I found out about him and his relationships (both with Oliver Hardy and a significant number of wives and mistresses), the more I felt that a novel would be the best way of exploring his emotional life.

It was a question of filling in some missing pieces of a jigsaw, really, because he left a huge amount of correspondence behind, as well as a great many interviews, but rarely spoke about his private life. By reading as much as I could about him, I was able to make some educated guesses at what those missing pieces might look like.

I’m currently writing a book about Angel & Louis, the two men who have Parker’s back in the series, and I’m also working on a script for what I hope will be a film of The Book of Lost Things. Adapting my own work is an interesting experience, but a lot more difficult and time-consuming than I’d anticipated.

Oh, my To Be Read pile is always huge! That’s what’s lovely about it. I have Dominic Sandbrook’s Who Dares Wins, Ghostland by Edward Parnell (available on our BorrowBox platform), two more books in The Country Girls Trilogy by Edna O’Brien, a forthcoming collection of short stories by Stuart Neville, for which I’ve promised to write a foreword, and an omnibus edition of the first four novels in Ursula K. Le Guin’s Earthsea series. I suspect, though, that they’ll all have to wait, because I’m looking forward to reading Hilary Mantel’s lengthy The Mirror & The Light (available on our Overdrive platform) as soon as it comes out.

8. Do you have a message for your many readers in Suffolk?

Just ‘Thank you.’ Thanks for sticking with me for all these years. I’m very grateful.

From memory, I can recite the entirety of Portia’s Mercy Speech from The Merchant of Venice. I learned it 37 years ago, and for some reason have never been able to forget it. Very odd.