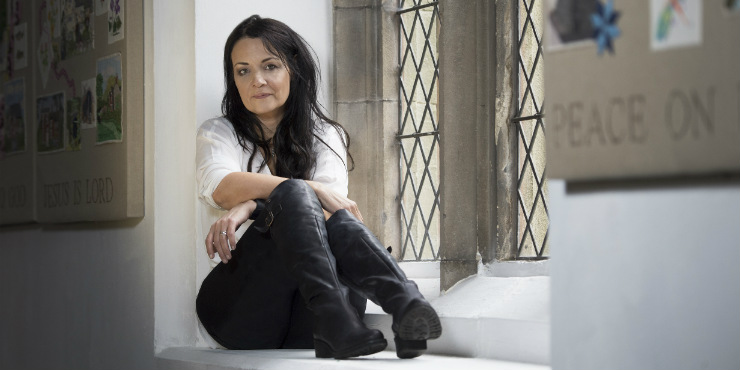 Joanna Cannon was born in a small Derbyshire town, at the very edge of the Peak District National Park. As a child she discovered what would become a life-long fascination with words, stories and character.

Her love of narrative had always drawn her towards psychiatry, but it wasn’t until her thirties that she decided to go back to college and finally complete the A-levels she’d abandoned some 15 years earlier.

Before specialising in psychiatry, Joanna rotated through a series of hospital jobs, from A&E to palliative care. It was around this time she began writing a blog in order to make sense of her experiences. She soon found herself writing the book that would become her bestselling debut, The Trouble with Goats and Sheep.

Set in the long hot summer of 1976, The Trouble with Goats and Sheep concerns two 10-year-old girls’ search for their missing neighbour, Mrs Creasy from Number 8. The neighbours seem keen to blame her disappearance on the heat, but Grace and her best friend Tilly aren’t convinced. Inspired by the local vicar, the girls decide to investigate, believing that if they can find God – who keeps everyone safe – they might also find Mrs Creasy and bring her home. The girls gradually uncover a series of small mysteries behind the avenue’s closed doors. As they try to make sense of what they’ve seen and heard, a wider history of deception and long-buried secrets begins to emerge.

As a young child, I borrowed Little Women from my local library every single week. I couldn’t bear the thought of it living at anyone else’s house (and I hadn’t quite grasped the concept there might be more than one copy!), but I think my biggest influence as a child was Alan Bennett. I remember watching Talking Heads on the BBC and being completely mesmerised. I knew exactly who these people were, from only a few words, and I wanted to understand how language could be so powerful.

2. Did you base your narrator Grace on anyone in particular?

No, I didn’t. She just appeared, fully-formed, in my brain. However, I’m sure there is a little of myself within Grace (and a little of most 10-year-old girls, to be honest!).

3. Is it true that much of The Trouble with Goats and Sheep was written in your car during lunch breaks?

It is! I started writing to relieve the stress of working on the medical wards. I qualified as a doctor quite late in life, and I found some of the experiences I had were very distressing. I used to sit in my car for half an hour every lunch time, with a League of Friends sandwich and a flask, and write to escape. I think most writers write to escape, to be fair.

4. How do you know when an idea has the potential to become a book?

I don’t think you do, until you start to write. It’s very tempting to procrastinate and put off committing yourself to the first line. There are endless blogs out there, telling you how to write. Endless software you can use to plot out your novel. You can spend all your time thinking about writing, and listening to other people’s advice, but the most important thing, is to sit down, open your laptop (or your notepad) and start.

I can! Three Things About Elsie will be published by Borough Press (HarperCollins) in January next year. It’s a story about what it means to grow old in today’s society. It’s about memory and identity, and how the echo we leave in the world might be louder than we think.

I would love to say thank you so, so much for all your amazing support. Goats and Sheep would never have been written without a childhood spent in a library, so to hear my book is being enjoyed by so many library members is an absolute joy.

7. Can you tell us one thing your readers may not know about yourself?

Gosh, I’m quite a simple soul, so there isn’t a great amount to reveal! I still get up at 3am to write and walk my dog through the fields. It was a habit I started at medical school (it was the only time I had to myself!) and it’s a hard habit to break.