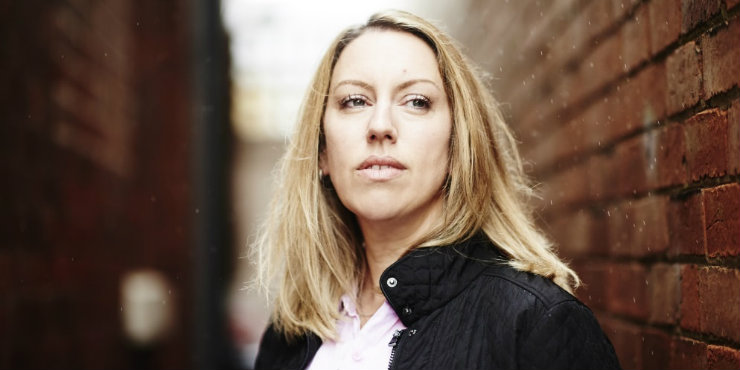 Jo Jakeman was born in Cyprus and worked for many years in the City of London. She was the 2016 winner of the prestigious Friday Night Live Award at York Festival of Writing where she was also shortlisted for Best Opening Chapter.

Jo is now based in Derbyshire. Following the completion of a creative writing course from Curtis Brown Creative, her first novel Sticks and Stones was published earlier this month.

Before I discovered the local library, I was limited to reading the books my parents had around the house. I grew up on a diet of classics. I adored Pride and Prejudice by Jane Austen, The Secret Garden by Frances Hodgson Burnett, and Little Women by Louisa May Alcott. I liked to think of myself as Jo from Little Women and Jo’s Boys. Like her, I considered myself a tomboy and would-be writer.

On the other side of the bookcase were horror novels by the likes of Stephen King which taught me the power of suspense and that drive to read ‘just one more chapter’.

2. Where did your inspiration for Sticks and Stones come from?

I took a creative writing course with Curtis Brown Creative. I was re-reading Charlotte Brontë’s Jane Eyre at the time and was talking to my course tutor about the type of men women fall for in classic novels, and that’s when the characters started to come to life.

It’s no accident that the antagonist in Sticks and Stones is called Rochester – the name of the man who Jane fell in love with and who locked his ‘mad’ wife in the attic. I turned that classic on its head so the wife, Imogen, locks her husband in the cellar. From there I wondered what Phillip Rochester would have to do to make a woman like Imogen do something so against her nature, and the picture of Phillip as an abusive man took shape.

3. At what stage did you feel you had Imogen’s ‘voice’?

The characters took shape before the story did. I had a clear picture of all of the women in the book and how different they were to each other, but Imogen’s voice didn’t sound real to me until I’d finalised the plot and understood what she’d lived through and how she would react to threatening situations.

4. Is there anything you can tell us about your current work in progress?

My next book is about a woman who has been recently released from prison. She starts a new life with a new identity but, as we all know, the past has a nasty habit of popping up when we least want it to.

It’s about forgiveness, and whether we really believe that people have served their time once they come out of prison, or does that sentence continue long afterwards? It’s due for release summer 2019.

I am currently listening to The Seven Deaths of Evelyn Hardcastle by Stuart Turton on audiobook, while also reading Three Little Lies by Laura Marshall. Next on the list is Jane Harper’s new book Force of Nature because her debut, The Dry, was one of my favourite reads of 2017.

I’d like to say a huge ‘thank you’! The idea that someone is taking the time to request and read my book is overwhelming, especially as I relied on libraries as a child and would spend many happy hours there. I am thrilled that my book will be available to people using the libraries in Suffolk.

If only I had a secret life as a lion-tamer to tell you about! Alas, I’ll have to leave you with this - My husband and I purchased our first house together on Channel 4’s Location, Location, Location with Kirsty and Phil. It’s still in the archives somewhere and I was wearing a terrible pink jumper that haunts me to this day.