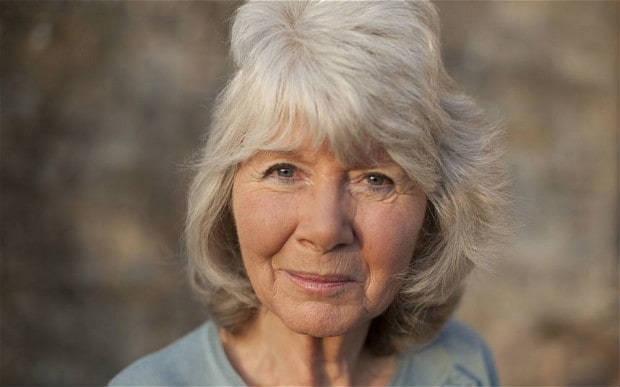 Jilly Cooper OBE began her career as a journalist. She has written novels, children’s books and non-fiction, but is possibly best known for The Rutshire Chronicles, her series of bestsellers that includes Riders, Rivals and Polo, each of which have sold more than a million copies. Jilly has recently published the latest in the Rutshire Chronicles, Mount!

My mother read hugely to me so everything from George McDonald, Princess and the Goblin, The Wind in the Willows, particularly Beatrix Potter’s The Tailor of Gloucester and Tom Kitten, behaving very badly at the party and all his buttons coming off as he climbed up the rockery. I also loved Pigling Bland, where Pigling Bland and Pigwig escape from going to market to be eaten and run away together with the beautiful ending “over the hills and far away she danced with Pigling Bland”.

As I got older I became obsessed with horses so I enjoyed the Pullein-Thompson books which were absolutely brilliantly written because they were full of wonderful quotations and heroism and terrific characters, and there was always a sweet little girl who couldn’t afford a pony but would be lent one and then win every prize at the end at the local Gymkhana because she worked so hard! They were lovely stories. I did love Enid Blyton. My mother used to read her books out loud to me. I was so excited, I used to read on when she wasn’t looking and had to pretend how excited I was when she read the chapter I’d already read.

2. It’s great to have Rupert Campbell Black back! Will you re-visit him in future?

I’m so pleased you’re pleased to have Rupert Campbell-Black back! Actually he was never away, he was a sort of deus ex machina in all the books but wasn’t centre stage so I thought it would be fun to make him centre stage in this one. Mount! is about flat racing. At the end of Mount!, Rupert’s lovely horse Safety Car is playing football with his two Jack Russells, Gilchrist and Cuthbert. Rupert’s daughter Bianca suggests he become joint owner of a local football team and his wife says only if he can sign up Safety Car! I think I’ll have fun writing a book about football. Rupert will be centre stage in that too.

3. Your books are published all over the world. Do your readers vary in different countries?

My books are published all over the world but not half as much as in England and I think they sell very well in Australia and New Zealand but never colossally in America. I think my humour is a bit silly for the Americans, and probably too English, but they do sell well on the Continent. I don’t really know the reasons because I haven’t been there but they do write lovely letters, particularly from the Czech Republic and Romania.

4. Do you have a message for your many readers in Suffolk Libraries?

The only message I have for any readers in Suffolk Libraries is huge love. I love Suffolk, it’s the most beautiful county. I’ve been to Aldeburgh a lot and to the Opera there and the countryside is so beautiful and so different from Gloucestershire which is full of woods and hills and Suffolk is a flat eternity of beauty. I’d love to spend more time there one day. All I can say as a message is that I’m thrilled you’re reading my books and please go on supporting the libraries because we really need them.

5. What is the best advice you were ever given?

I said this on Desert Island Discs. It was my lovely beautiful grandmother who told me that whenever you met someone new, look for something nice to say about them, that their hair’s nice or they’ve got a charming smile or they’ve said something funny, because it will cheer them up and it’s nice to cheer people up. She was a lovely woman and everyone loved her, so I’ve tried to do the same. I hope people don’t think it’s too gushing but to love and cherish are the nicest words in the Prayer Book.

6. What would be your perfect day?

Having been endlessly promoting Mount! for the last few months, I think my perfect day would be spent in bed with a good novel. I’m reading Ian McEwan’s Nutshell at the moment which is absolutely fantastic.