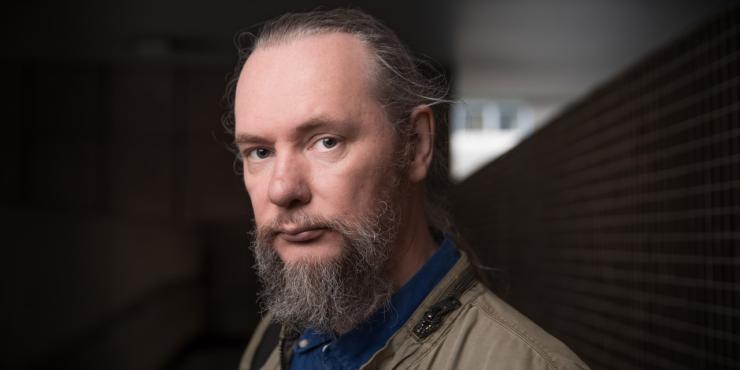 James Swallow is a British author. A BAFTA nominee and a New York Times, Sunday Times and Amazon no.1 best-seller, he is the author of several original books and tie-in novels, as well as short fiction, numerous audio dramas and video games. His writing includes the Marc Dane series of action thrillers, the Sundowners series of Western fiction steampunk novels, and fiction from the worlds of Star Trek, Warhammer 40,000, Doctor Who, 24, Stargate, 2000 AD and many more.

James’s latest book is Rogue published by Zaffre, which will be released on 28th May 2020. You can pre-hold this title on our Overdrive platform.

I have great regard for titans of the thriller genre like Ian Fleming, Tom Clancy, Wilbur Smith and Robert Ludlum, and the great science fiction writers who have influenced me, such as William Gibson, Douglas Adams, Iain M. Banks and Philip K. Dick.

I think I always had a desire to write from my childhood, but it wasn’t until a lot later that I realized you could actually do it for a living! It’s something I’ve always enjoyed, so I guess it was inevitable that I would become an author…

2. You have written in different genres for TV, radio and even video games. How does your approach differ when you write in each genre?

At the end of the day, writing is writing, and I think having told stories not just in games but also in short fiction, audio and other formats gives me a broad experience of narrative to draw from. Writing games certainly teaches you how to structure plotlines with a sense of momentum and compelling core characters and that’s something that translates well to the thriller genre.

3. Marc Dane is not a conventional action hero. How did he come to life?

Marc grew out of a realization I had that almost every action protagonist I was seeing in media were these super-competent, near-flawless guys who had little to no tech-literacy. You had your hero (the trigger-puller/door-kicker) and your backseat guy (the hacker in the van working a laptop). I asked myself what would happen if the latter was forced into doing the job of the former – someone who had to work a little harder for every victory, who was smart and resourceful…but sometimes fallible.

That’s Marc Dane; he has to work at being a hero and I think that makes him more relatable.

4. Your latest book is Rogue. Can you give Suffolk readers a flavour of what to expect?

I describe my books as fast-paced espionage thrillers for the digital age, set in a Post-WikiLeaks world where private military contractors, agile terror cells and corporations wield as much power as national intelligence agencies.

The biggest inspiration for writing these novels were the high-octane espionage stories and techno-thrillers I loved from the 80’s and 90’s. I really wanted to write a tech-savvy action-adventure, but one view through a more modern lens. And it was important for me to have a hero facing off against deadly threats who wasn’t an elite black-ops tough guy or a super-suave secret agent.

5. Can you share anything about what you are working on at the moment?

I’ve just finished a top secret novel project that hasn’t been announced yet, so I have to keep mum on that for now – but my next project is going to be the 6th Marc Dane thriller, so I’m looking forward to getting into that!

6. We’ve all been dealing with the effects of the COVID lockdown. What is the effect on a writer like yourself?

We authors often work from home, so if anything, it’s everyone else who is experiencing a bit of what it is like to be us! I’m making sure I keep safe and stay sensible, and I’m looking out for family and friends as much as possible, but day to day I’m still writing. In a crisis like this, I think it’s important to keep things ‘normal’…

7. Has a book ever changed your life or made you look at things differently?

I’d have to pick two. First is The Hitch Hikers Guide to the Galaxy by Douglas Adams never fails to make me laugh, even though I’ve lost count of the number of times I’ve read it; and second is William Gibson’s Neuromancer. The seamless sense of location and pace made me want to try to tell my own stories with the same confidence. Both of these books encouraged me to write, and for that I’ll always be grateful.

8. How do you fill your time when you are not writing?

I like to travel (it’s a great excuse to scout locations for future novels…), and when I’m not doing that I like to read, watch movies or play games.

9. Do you have a message for your Suffolk readers?

Thanks for reading my books and for your ongoing support of Suffolk’s libraries and independent bookstores!

10. Can you tell us one thing about yourself that your readers may not know?

I own a lot of hats. Way more than I ever wear.