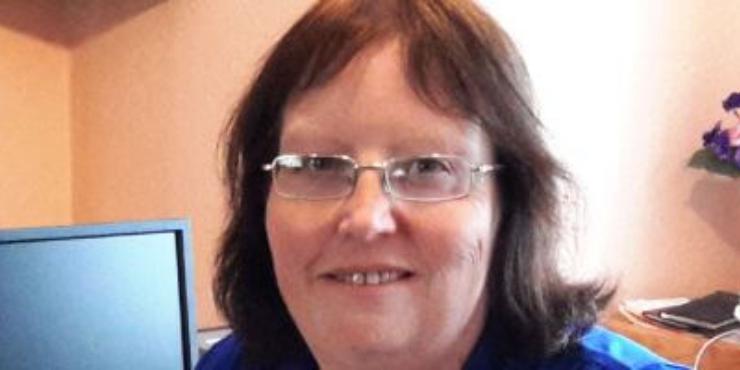 Faith Martin is well known for her popular detective books starring DI Hillary Greene. She also writes under the pen names of Maxine Barry and Joyce Cato. Faith has sold two million books in the course of her writing career. The latest in the Hillary series, Hillary’s Back! was recently released.

I loved reading Agatha Christie when I was quite young and she led me to the other ‘golden age’ authors, who clearly really knew their stuff! Then I discovered Raymond Chandler and the more hard-boiled American PI’s and loved those too. I think my love of a ‘proper’ whodunit has always stayed with me, even when writing police procedurals. What I love about a novel is being taken on a roller-coaster of a ride both plot and pace wise, so I try to write books that are easy to read with a ‘proper’ whodunit puzzle to solve that are also fairly fast-paced.

2. How did the character of DI Hillary Greene come about?

I started my career back in the early 1990’s (as Maxine Barry) writing romantic thrillers. But ‘romance’ fell out of fashion for a time, and since I preferred to read crime anyway, decided to switch genres.

Since I’ve lived in Oxfordshire all my life, (and it is easier to write about where and what you know) I had no other choice but try and carve out something new for myself and my main character in a city already rife with crime writers and sleuths! At the time, Inspector Morse was at the height of his fame and popularity – and how could I compete with that? So I basically sat down and thought – OK, what – or who – is as far removed from Morse as possible? So, first thing, is to make my detective a woman (not much brainpower needed for that one!). Then I had her work out of Thames Valley in Kidlington – and have her solving crimes in the surrounding market towns and villages, as opposed to the hallowed college grounds that were such a wonderful part of Morse. Then I concentrated on making her character interesting but not too unbelievable (some characters in books seem to be so dysfunctional or have such a shambolic home-life that I don’t know how they cope with solving murders as well!). So I thought “well, anyone can make a bad marriage – so why not have my DI going through a divorce?”. And that led to “well, if she married a wrong ‘un why not make him a bent copper?”

And because I’ve known the Oxford canal all my life, why not have her forced out of her family home and living on a narrowboat? And from that, one thing led to another, until one day I found myself face to face with Hillary Greene – a competent, tough woman with an ironic sense of humour with quite some steel in her backbone! (I don’t think she was much impressed with me though! Unlike her, if I saw an armed robber coming towards me, I’d probably just squeak and fall over.)

3. You write under a variety of names. How does that work for you? Do you plan ahead or think ‘that has potential to be a Jenny Starling mystery’?

Different names are useful when writing in different genres, as it helps to keep readers from being confused. When I first started writing, it was romantic thrillers under the name Maxine Barry. But when I changed genre, I needed to use a different name (so romance readers weren’t misled into buying a crime novel!).

When I made the switch, I began by writing the classic-style whodunits that I loved growing up and used the name Joyce Cato. Which meant that readers who liked ‘cosy’ (hate that term!) country-house set novels, complete with red-herrings, the traditional six or so suspects and a locked-room mystery that needed solving, knew that they were getting when they chose a book written under that name.

But then when I changed to writing police procedurals, I needed yet another name – Faith Martin - so that readers would know a Faith Martin book meant that a police-procedural novel was in the offing. (I know – clear as mud, right?)

4. And in your new book Hillary is back… Can you give Suffolk readers a taste of what to expect?

Hillary’s Final Case was meant to be the last DI Greene book because my (then) publisher, Robert Hale, retired. And to find a new publisher I needed to create a new character/series – which is why I created the Ryder & Loveday books set in the 1960’s for Harper Collins. However, so many readers kept asking me to bring Hillary back, that when I finally had a break in my hectic writing schedule, I decided to write another one. But not without some trepidation, I can tell you! It had been about 4-5 years (at that point) since I’d written a Hillary Greene book, and I was not sure how I’d fare going back to her after writing a series of books that were so different. (Don’t people say you should never go back? Gulp!)

Also, I’d left her about to move into a new home with the love of her life. But when I approached her to see if she wanted to solve another case, it quickly became apparent that neither one of us saw her as living anywhere other than on her narrowboat the Mollern. And why would she be back there? Without giving away too many spoilers, let’s just say that she’s not in a particularly good place when the new novel opens, but, with her usual grit and determination, she doesn’t let that stop her solving her latest cold case.

Her new task involves finding the killer of a very unpleasant young man who was found dead in woods near his village home. But since nearly everybody had a reason for wanting him dead – and nobody cares if the crime is solved or not – she has her work cut out for her, which is just how Hillary likes it! She also has a whole new team around her – but again, I won’t spoil that for her readers by going into details now. I’m hoping they’ll want to discover these new people in Hillary’s life for themselves when they read the book!

5. I read somewhere that you are a huge fan of Agatha Christie’s work and Golden Age Crime. What is it about this era that continues to attract readers?

Yes, I love Dorothy L. Sayers, Edmund Crispin, Patricia Wentworth and all that gang! I think there’s a charm about them that will always appeal. Plus people will always want and love to solve puzzles. Not only that, I think there’s also something about the ‘orderliness’ of having bad people caught and punished that satisfies something in the human psyche, given the chaos of the modern world.

I recently signed another 3-book deal with Harper Collins for another round of Ryder & Loveday books and am just about to start writing the next one (the 6th) – which is always a thrilling time. At the time of creating them, I’d never written about a pair of sleuths before, so that was something different for me. Also, writing novels set in the iconic 1960s is always such fun. Mind you, I can get tripped up when it comes to research sometimes. I always try so hard to think of everything, but for instance, in one of the books, Ryder & Loveday had to travel to Cumbria to talk to a witness. So I meticulously researched when the M1 was opened (can’t have them going up a motorway that hadn’t been built yet!). Then what the most popular makes of cars would have been, if AA men still did their famous salute at that time, and even what the number plate sequences were at that time. Finally, satisfied I’d thought of everything, I wrote the scene. Only to notice in a review of the book later, a reader pointing out that in 1961 Cumbria as a county didn’t exist!

I always have bags of books (literally) to be read, ranging from modern American writers going back to Carter Dixon (or John Dickson Carr), to modern English writers like Elly Griffiths, going back to books written in the 1920s. I also like to read crime mysteries from countries and authors all around the world – Italy, Africa, Australia…

In short, too many books to ever read! (But I’d go crackers if I didn’t have a huge pile of books not yet read. After all, what would happen if we got snowed in one winter for 3 months?)

8. If you had not become a writer what would you have liked to do instead?

Nothing! The only thing I was ever good at in school was writing stories! Although I do love wildlife – so perhaps working to help wildlife/ecology some way.

9. Do you have a message for your readers in Suffolk?

Yes – thank you for reading my books. I’ve been writing for nearly 30 years and the one thing that keeps me (and most of my fellow authors) going is knowing that people enjoy reading our work.

10. Can you tell us one thing about yourself that your readers may not know?

Huh, that’s a tough one. I’m the most ordinary person I know! I did once win an award for my romance fiction, which was meant to be an annual thing – but then the publisher got taken over by a bigger house who didn’t want to continue with it, making me the one and only recipient of the award!

Meaning I got to keep the silver tray. (Not sure if that’s a good thing, or rather pathetic…)