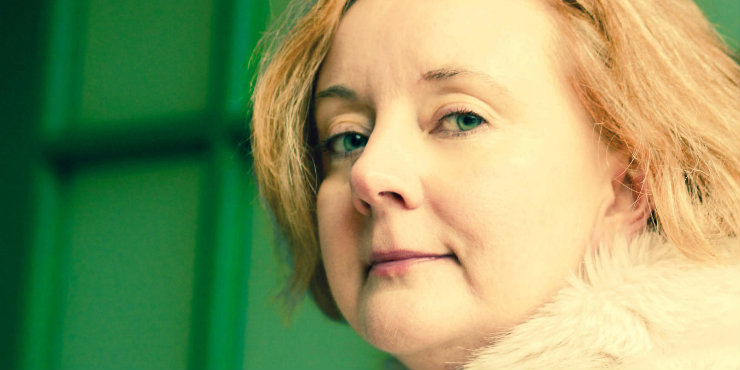 Emma Flint grew up in Newcastle and graduated from the University of St Andrews with an MA in English Language and Literature. She later completed a novel-writing course at the Faber Academy.

Since childhood, she has read true-crime stories, developing an encyclopaedic knowledge of real-life murder cases. She is equally fascinated by notorious historical figures and by unorthodox women – past, present and fictional.

All of these themes informed and inspired her acclaimed debut Little Deaths, a heady blend of sex, murder, obsession, noir and a femme fatale. Set in 1960s suburban New York, the novel retells a horrifying true story with a modern feminist slant.

Like most of my peers, I read a lot of Enid Blyton, and I loved the Narnia books by CS Lewis. I still have all my childhood books at home – they’re very precious to me.

Agatha Christie was a big influence: my mum gave me Cat Among The Pigeons when I was ten, and a few months later I wrote my own first ‘novel’. It wasn’t terribly original: it included a series of country house murders, a French detective with an enormous moustache and his bumbling English sidekick. There was a victim who wore tweeds, and a murderer ‘with greasy hair the colour of egg yolk’.

I read a lot of historical fiction: Nina Bawden, Noel Streatfeild, Mary Stewart, Louisa May Alcott, and the Katy books by Susan Coolidge. I think it was when I graduated from Agatha Christie to Sherlock Holmes that my interest in historical crime really took root.

I was reading true crime by the time I was twelve: for a long time my ambition was to be a Home Office pathologist, and I devoured biographies of pathologists, and accounts of their most famous cases. Unfortunately at fourteen I discovered that I’d need three science A-levels to get onto a forensic science course, and abandoned that idea. But by then I was reading true crime in earnest – I got through a lot of books by Ann Rule, John Dunning and Jonathan Goodman as a teenager.

By sixteen I was subscribing to Murder Casebook, a series of weekly publications by Marshall Cavendish which ran from 1991 to 1994. Issue 11 contained the story of a mother in New York who was suspected of killing her two children – and this account became the genesis of Little Deaths.

2. I read somewhere that you had been interested in this case for many years. What was it that made you want to write about it?

I first read about the Alice Crimmins case when I was sixteen, and the details stayed with me for twenty years, until I began to write the book that would become Little Deaths.

There were two things in particular that haunted me about the case: firstly Alice herself, who was the basis for the main character in Little Deaths, Ruth Malone. In every photograph of her, she is dressed in tight clothes that show off her figure, and even in black-and-white pictures, her heavy make-up is striking. And yet despite her vivid presence, she is strangely absent from each picture – she almost always has her eyes cast down, her lips pressed tightly together. She refuses to look into the camera, refuses to engage with the audience. I became fascinated by this woman and why she became the chief suspect in the murders of her children before the police even had confirmation they were dead – and Little Deaths was borne out of this fascination.

The other thing that stuck with me was the statement that Alice gave about the last night she spent with her children. She told the police that she’d fed them veal and tinned green beans for dinner, but the autopsy on her daughter’s body found pasta in her stomach. Over the twenty years that passed between reading about the case and writing Little Deaths, I kept coming back to this discrepancy. Of all the lies Alice could have told to cover up what happened, why would she lie about that detail – one that didn’t give her an alibi, one that was so easily disproved?

3. How did you decide which aspects of the story to put into the book and which areas you created?

The real story that Little Deaths was based on was fairly sensational in its own right, and gave me plenty of material for the novel. Most of the key characters are based on real people, but I’ve changed their names and embellished them with fictional details. Charlie Devlin is a composite of several of the officers involved in the initial investigation. Pete Wonicke, Friedmann, Horowitz, Gina and Bette are my own inventions.

The essential facts of the story remain the same: the real Ruth woke up one morning in the summer of 1965 to find her two young children missing from their apartment in Queens. Her four year-old daughter was found dead that afternoon; the body of her five year-old son was discovered a week later.

The real Ruth and my character have many similarities – they’re the same age, both are separated from their husbands, both have low-wage jobs that require them to work shifts, and both are very attractive. Each has two young children who disappear from their bedroom and are later found dead – and both became the main suspects in the subsequent murder investigation. But Ruth Malone is really a work of imagination like any other fictional character.

I think writing about a real crime is similar to any other historical fiction: it’s my job as a novelist to take the basic facts and breathe life into them so that the reader can experience them in a new way. The key is to make the characters real, and the past immediate and familiar, by writing about situations and experiences that the reader can relate to. We all know what it is to experience sadness or loneliness or fear: as a writer you need to make what your characters are going through vivid enough that readers feel it too.

4. There have been examples recently of high profile court cases involving women.  What are your feelings when we still seem to be covering similar ground fifty years later - gender politics, media manipulation etc?

Disappointment. Anger. I find it appalling that in 2017 we’re still seeing headlines like ‘Legs-It’ above a photograph showing two UK heads of state who both happen to be female, and that Donald Trump can make lewd comments about women and then get elected as President of the United States.

On the other hand, I’m encouraged by the fact that the treatment of women in the media is being called into question more and more. Books like Naomi Wolf’s The Beauty Myth and Laura Bates’ Everyday Sexism and Girl Up, campaigns like No More Page 3 and End FGM, have all taken feminist messages and highlighted the visible misogyny in common situations – and thankfully, are beginning to have a widespread effect.

The ‘Legs-It’ headline was infuriating and Trump’s comments on women were outrageous - however, on the positive side, there has been a clear outcry about both.

While there is clearly still a great deal of work to be done around how women are portrayed in the media, not least in the area of intersectional feminism – the most vocal feminists are still white middle-class educated women – it is apparent that things are slowly changing, and for the better.

5. Is there anything you can share about your latest ‘work in progress’?

Like Little Deaths, it’s about a real-life murder case, but is set in the south of England in the 1920s. It’s about a love triangle, and it’s about shame, fantasy and obsession. I’m at the point where I’m completely engrossed in my characters, and where they’re starting to take on a life of their own.

I really appreciate your interest in Little Deaths – meeting readers and hearing their enthusiasm is the most amazing thing about being a published writer. It was my dream to write a novel for so long – and I still find it incredible that my book is out there, being read and talked about.

And on a wider note – please keep using and supporting your local library. Libraries are such a valuable service and they need care and encouragement more than ever.

I adopted two kittens around the time that I started writing my second book, and named them after 1920s cultural icons: Zelda Fitzgerald and Tallulah Bankhead.