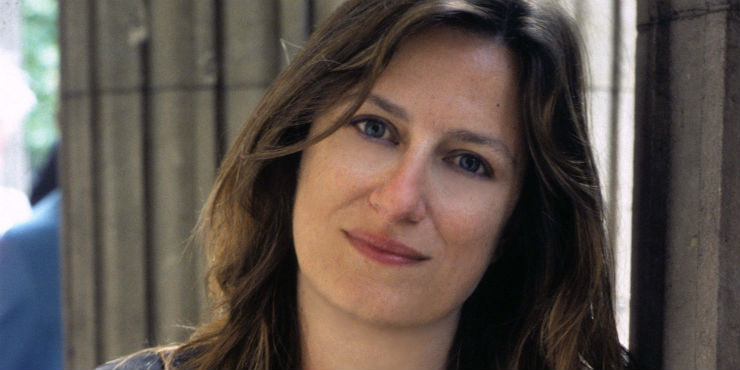 Elly Griffiths is the creator of the Ruth Galloway mysteries. Her eighth in the series, The Woman in Blue was our featured title for February. She is also the author of The Stephens and Mephisto novels which are set in Brighton. The Zig Zag Girl is a firm favourite with Suffolk book groups. Under her real name Domenica de Rosa, she has also written four books which are available on Kindle. She has recently been busy touring the country launching The Woman in Blue but she found time to answer some questions for us.

I attended your recent talk in Ely Library where you spoke about how you stopped being Domenica de Rosa and became crime writer Elly Griffiths. For those unaware of your earlier books how did you make the transition?

Well I had written four books as Domenica de Rosa (my real name though I know it sounds made up). Those books were mostly about families, history and Italy. Then my husband Andy gave up his city job to become an archaeologist. I began to get interested in archaeology and got the idea for The Crossing Places on a trip to Titchwell Marsh in Norfolk. My agent said, “This is crime. You need a crime name”. I decided on Ellen Griffiths, my grandmother’s name. My publishers decided that Elly looked ‘younger’.

Ruth Galloway is a frequent visitor to Norfolk. Are we likely to see her come over the border into Suffolk in future?

There’s a definite possibility. I’ve already had a scene or two in Southwold. And there is a lot of archaeology in Suffolk…

Ruth is not a traditional female detective. She is clumsy and has weight issues. Was it a conscious decision to make her as real as possible?

Yes. A lot of female protagonists in crime novels tend to be rather glamourous, given to running twenty miles before breakfast and rustling up gourmet meals. I wanted to create someone who I could relate to, someone who loves her work but often feels insecure, someone who would rather eat a gourmet meal than cook one.

Can you give us a sneak peek of what you are working on at the moment?

I’m currently writing the ninth Ruth book, The Chalk Pit. I’ve also finished the third Stephens and Mephisto book, The Blood Card, which will be out in the autumn.

If you hadn’t become a writer, what career do you think you would have chosen?

I think I would have stayed in publishing. When I was younger I wanted to be an actress but wasn’t talented enough.

Can you describe yourself in three words?

Reserve books by Elly Griffiths from our online catalogue.