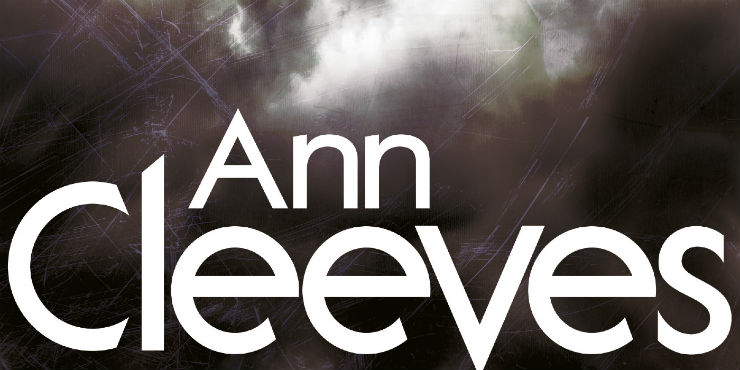 Ann Cleeves is a British crime-writer who needs little introduction. In 2006 she won the inaugural Duncan Lawrie Dagger, the richest crime-writing prize in the world, for her novel Raven Black. Ann also created the Vera Stanhope novels which have been dramatised as the TV detective series Vera and the Jimmy Perez novels as the series Shetland.

Why do you think crime books are so popular?

I think crime novels have always been popular and now we have a greater variety than ever. The popularity has something to do with great story-telling and the sense of resolution at the end of the novel. There are books to suit every possible taste from the gentle and domestic to pacy thrillers.

I was an Enid Blyton child; though I realised quite soon that she wasn’t a fantastic writer there was something very compulsive about her books. She had the skill to make the reader long to turn the page to find out what would happen next. I moved on quite quickly through Malcolm Saville, the Father Brown and Sherlock Holmes stories to Christie and the rest of the Golden Age detective novelists. Although I went on to read widely in very different genres, crime fiction was always my comfort reading.

Where did the character of Vera Stanhope come from?

Vera appeared fully formed when I was stuck with the plot of The Crow Trap. It was planned as a novel of psychological suspense and I didn’t expect to create a detective character at all. Trying to unpick it, I think Vera was inspired by some of the formidable spinsters I knew when I was growing up. I was born in the mid-fifties and they were probably created by the war - they’d either lost sweethearts to the fighting or they’d taken on responsibilities that wouldn’t have been available to them in previous times. They seemed to rule the small town where I lived - one was a hospital matron, another the Sunday school teacher, another the head mistress of my infant school. They were very competent, but not at all glamorous.

You must have had your own idea of what your characters look like. Has it helped or hindered you having them live on screen?

I try to keep the screen characters separate from the characters in my head - though Brenda Blethyn has very much become my Vera. It’s easier with Jimmy Perez, the detective in Shetland, because Dougie Henshall looks quite different from my creation. He’s blond and Scottish while my Jimmy is dark and Spanish-looking. Dougie absolutely captures the essence of the man, though. I’ve been incredibly lucky with both adaptations.

Do you still read other crime writers now you are a writer yourself?

Absolutely! My reading passion is translated crime fiction. I love the French writer Fred Vargas and I’ve just come across Valerio Varesi who sets his work in the Pau valley in Italy. And of course there are some wonderful Icelandic and Scandinavian authors when I’m in the mood for cold weather and a bleak landscape.

How do you know when an idea has the potential to become a book?

I don’t know really until I start writing about it. I never plot in advance and the story grows. I’m influenced by my preoccupations of the time rather than a specific idea. The theme emerges as I write.

My new book, Cold Earth, will be published in October. It’s a Shetland novel. There’s a landslide that cuts Shetland mainland in half, sweeping away a small croft house as mud and rocks slip towards the sea. Everyone believes that the house was empty, but the body of a woman wearing a red silk dress is found in the debris. I’ve just started a new Vera book.

Up early to write - I still love the process of making up stories. Then a walk up the Northumberland coast with my husband Tim, perhaps with lunch at the Boat Shed in Amble. And we’d end up in the Rockcliffe Arms, our local pub, with our friends.

Reserve books by Ann Cleeves from our libraries.