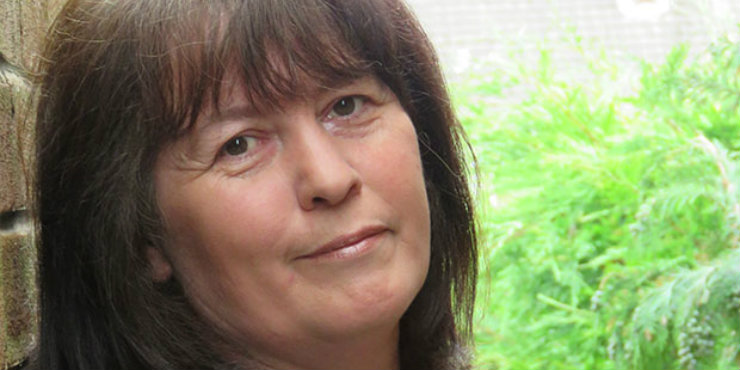 Angela Marsons is a British crime writer from the West Midlands. A former security guard, she was rejected by numerous publishers over 25 years, then released three books in her Kim Stone crime series in 2015 under digital publisher Bookouture. Within a year, she had sold one million novels, leading to a print deal with Bonnier Publishing Fiction.

Angela’s books are really popular in Suffolk. When we put up an OverDrive shelf recently, the books all issued within half an hour!

I was definitely an Enid Blyton fan and absolutely loved the escapades of the Famous Five.

When I was around twelve years old, my English teacher asked if she could bring me some books that were above my reading age. She introduced me to Andrea Newman’s two books Alexa and Three into Two Won’t Go. I was absolutely hooked on the complexity of human relationships and that’s when I knew that I wanted to be the one writing the stories for people to read.

2. How did the character of Detective Kim Stone take shape in your mind?

The character of Kim Stone had been building in my mind for many years but I ignored her voice as she sounded quite unlikeable and rude even to my own ears. I spent many years writing books that I thought agents and editors would like until eventually I wrote the book I wanted to and allowed Kim Stone to take control of my pencil.

It was only then that I realised she wasn’t quite as bad as I had thought she was and actually had a few strong redeeming qualities. I learn more about her myself with each new book that I write.

3. Your books always have a lot of twists and turns. Do you know where the book is going as you are writing it, or is it minutely plotted?

I cannot minutely plot a book at all. I tried it once and by chapter three I was bored to death and had to abandon the project as there was no surprise left in the story for me to discover on the journey.

I normally have a vague idea of a start and a finish and the subjects that I want to cover. I start writing and as ideas and plot twists come to me I write them down in a separate notebook, but I try not to go backwards. If I think of a new plot line or sub-story which requires backtracking I’ll just make a note and fix it on the second draft.

4. Do you ever read other writers in your genre or do you prefer to relax with something different?

Yes, I love to read writers in the crime genre but not while I’m writing my own book. My favourites are Val McDermid, Karin Slaughter, Lynda La Plante and Carol O’Connell.

For something different I love to read books by Renita D’Silva who writes highly emotional stories that reach between the UK and India. For a chuckle I’ll pick up a Sue Watson book as her characters are a joy to follow.

5. You are a prime example of persistence paying off for an aspiring writer. What advice would you give to someone in a similar position?

The first would be to never give up. Silent Scream was rejected by every major publisher in the country and yet has sold almost one million copies in two years. Choosing which books to publish is subjective from an editor’s point of view and rejection should not be taken too personally.

I would also advise any aspiring authors who are submitting to make sure they remember what they loved about writing in the first place. Rejection and criticism can be hard to take and maintaining that love of words and creating a story is imperative to sustain the soul.

I would just like to thank any readers of the books in Suffolk Libraries for giving Kim Stone a chance. I understand that she’s not the most likeable character and I am hugely grateful to the readers who have chosen to stick with her and follow her journey through thick and thin.

The fact that my books are available in libraries is still something I pinch myself about every single day. There are certain dreams you have through the struggle and seeing my books in libraries was definitely a dream that I could never visualise actually coming true.

I used to live in a one-bedroom flat with 13 animals and a moped. Too many trips to the pet shop and seeing small animals that looked sad and lonely. The moped was pulled into the flat at night (ground floor, thank goodness) as I had at least three of them stolen from outside the front door.

Luckily my Golden Retriever and talking parrot have a bit more room and my car is reasonably safe outside my home these days.