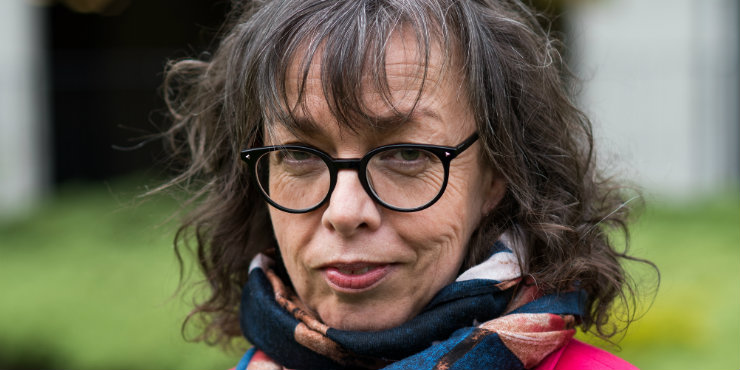 Amanda Mason lives in York and studied Theatre at Dartington College of Arts, where she devised and directed plays. She worked as a street performer and teacher, among other things, before becoming a full-time writer. Her debut novel, The Wayward Girls, was published earlier this month and was longlisted for the Deborah Rogers prize for first-time writers.

This is such a tough question. I was one of those kids who always had her nose stuck in a book; I was a voracious reader and I was fast, which is hard on your pocket money, so thank goodness for my local library. I started with the usual suspects: Malory Towers, The Secret Seven, the Andrew Lang Fairy Books, and the Chalet School series. I read a ridiculous amount, and re-read books constantly.

Like a lot of people, the first more adult books I read were Agatha Christie’s, and I still love golden age detective fiction; but I’ve always had a taste for the scary stuff. I loved the Alfred Hitchcock Three Investigators series (not written by Hitchcock at all, of course, but by Robert Arthur Jr.) I read Edgar Allan Poe when I was probably a bit too young for him, as well as J. Sheridan Le Fanu, and around the same time I got hold of some highly unsuitable Pan Horror paperbacks.

I loved (still love) Jane Austen, Angela Carter, Daphne du Maurier, Alan Garner, and Stephen King. And through Stephen King I discovered Shirley Jackson. I adore Jackson; her work is moving, unsettling, blackly comic, terrifying. The Haunting of Hill House is one of the finest novels ever written. Each time I read it – and I refuse to read it in bed, because it’s too scary – I find something new.

There are many contemporary writers I admire – Michelle Paver, Sarah Waters, Phil Rickman, Laura Purcell among them - but it’s Shirley Jackson I go back to over and over again.

2. Where did the idea for The Wayward Girls come from?

I sat down and thought carefully about the kind of novel I wanted to write. I knew it was going to be a ghost story, and that it would look at the relationship between two sisters.

I was a teenager in the 70s, and I wanted to set a least part of the novel then, as looking back, there seemed to be an obsession with psychic phenomena – Uri Geller, spoon-bending, Ouija boards, poltergeists, and blurry black and white snapshots that claimed to be photographs of actual ghosts – which was exactly the kind of thing I loved to read about, by the way.

I did a bit of internet research, and there were a few accounts of hauntings – vague, inexplicable events – in very ordinary houses, that got brief but intense coverage in the Sunday papers. And that struck me as an excellent starting point. I wanted a fairly ambiguous beginning to the haunting, so I decided to write about a poltergeist.

One of the problems with ghost stories is that any sane person would leave once everything kicked off, so I began to think about that. What if my family lived somewhere remote, under circumstances that made it difficult to leave? What if there were other characters involved who didn’t want to leave, who maybe welcomed the haunting, so there would be a reporter, and a team of investigators – two teams, actually – with their own agendas. And then I began to wonder would happen once the haunting ended, or seemed to end.

3. The relationship between Loo/Lucy and Bee is at the heart of the book. How did the characters take shape as the book progressed?

I’m fascinated by the relationship between sisters. I wanted to write about the rivalry and power shifts, the way you can love someone even if you don’t like them, the inescapable intimacy of it – particularly if you’re treated as one of a pair, which is what happens to Bee and Loo.

It’s difficult to talk about their development without spoiling the plot, but in the 70s sections, it’s their relationship that informs everything, everyone else sort of circles them, and I was surprised at how that led to the balance of power between them shifting – in ways I hadn’t expected when I started writing. Initially, Bee was the leader and Loo her follower, but that has to change once the investigators arrive at the farm, mostly because Loo has to find ways to assert herself. Their relationship is revealed to be more complex than I’d anticipated. There are times when they find strength in presenting a united front, and times when they chafe at being viewed as ‘the girls’, when each attempts to break free of the other.

In the present day sections, Lucy is very much the product of her experience at the farm, although at the start of the novel she would deny that. She’s become someone who’s very adept at shutting people out, but during the course of the modern day investigation that has to change.

4. Was it a deliberate decision to set the novel in the long hot summer of 1976, as some parts of the story are absolutely chilling?

The short answer to that is, yes. I remember that summer, and I think it’s come to represent the archetypal long-summer-holiday-life-in-limbo moment for a lot of people.

5. What was your route to publication, and how does it feel to have your work on bookshop and library shelves?

I came to writing quite late, and after having some short stories published, I began writing novels. I started querying agents, and an early version of The Wayward Girls got a lot of attention that never quite led to an offer of representation.

I redrafted it – there’s a lot of redrafting in this story – and sent it off to Julia Silk, who gave me some excellent advice; she suggested I get a professional edit, and she was kind enough to recommend a freelance editor.

I followed her advice and the editor, Sophie Orme, did a fabulous job. She also remembered me when she gave up freelancing and moved to Bonnier Zaffre, and she asked to see the manuscript again once I’d redrafted in the light of her notes. I sent it to her, and that led to one of the more exciting phone calls of my life, and Bonnier making an offer before I’d actually signed with an agent, although I did persuade Julia to take me on as a client not long after that.

To actually see my book in a shop or library is exhilarating. It’s also kind of terrifying, because I have to let go, and the book is going to go on and have its own life without me, and that’s a huge responsibility, but also such a privilege. I come from a very ordinary working-class family, and we’re all extremely bookish, so yes – this is just astonishing and wonderful.

Hello, fellow library fans, it’s lovely to meet you. Thank you for choosing to read The Wayward Girls; I hope you enjoy it, and that this is the start of a beautiful friendship.

When I was in my twenties, I was part of a street magic act called La Famille Poisson. I used to get inside a wooden box which then had 26 solid steel swords pushed through it. Neither the box nor the swords were gimmicked, and I re-emerged unscathed every time. I could tell you how I did it, but sadly that’s against the magician’s code.