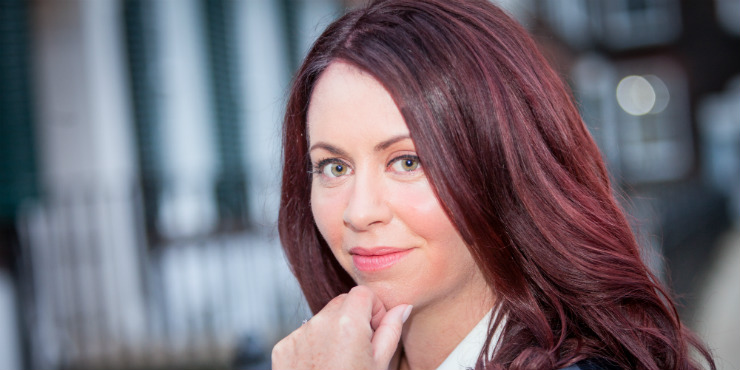 Alice Feeney is a writer and journalist. She spent 16 years at the BBC, where she worked as a reporter, news editor, arts and entertainment producer and news producer.

Alice is a Faber Academy graduate from the class of 2016. Sometimes I Lie is her debut thriller and is being published around the world in 2017. It has already become a firm favourite here in Suffolk so you will probably have to join a waiting list to get your hands on it!

There were so many! When I was a little girl, I used to sit in the back of my parents’ shop, reading stories as well as making up my own. I was a regular Matilda at my local library. I loved Alice’s Adventures in Wonderland by Lewis Carroll and anything by Roald Dahl.

As a teenager my tastes turned a little darker and I started reading novels by Stephen King. The books I remember the most from my teenage years are Animal Farm and The Handmaid’s Tale, a novel which had a huge effect on me both then and again now.

2. How did the character of Amber Reynolds come about?

The idea for this story literally came to me in a dream! I scribbled it all down at about 3 one morning (I do this quite often) and when I woke up the next day, it still seemed like a good idea (this happens less often). I couldn’t stop thinking about Amber and so in the end, her story just had to be written.

This time last year, I was still busy scribbling my first draft of Sometimes I Lie. I wrote this novel while working full time as a producer on the BBC’s One O’clock News, so some parts were written in my garden shed at home, but others were written on the train to work or in my lunch breaks. If you told me back then that it would be a real book less than a year later, I wouldn’t have believed you, I feel very lucky indeed!

3. The plot of Sometimes I Lie has so many twists and turns. This suggests a lot of plotting and planning?

I’m definitely a planner. I think about a story for a really long time before I’ll commit to writing it – my stories often spend months simmering away in the background before I begin. I have a giant corkboard at home covered in different coloured cards – each one represents a chapter and I can’t write a word until the whole thing is planned out.

There is no right or wrong way to do it though, I think it is just about finding whatever way works best for you. There are authors who can just sit and write and I think they must be far cleverer than I am. For me, starting without a plan would be like setting off on a long walk with the dog to somewhere we have never been before without a map – I’d be worried the whole time about getting lost!

4. How does being a published writer compare to working in a busy newsroom?

I loved my job at the BBC, but I love writing fiction even more. Having been a journalist for sixteen years, I’m pretty good at sticking to deadlines – which is something my agent and publishers seem to appreciate. Being interested in the world around you and the people in it is essential and I also have a pretty good memory, which is handy for both jobs. To me, being an author is the best job in the world and I feel very lucky to be able to write full time now.

5. Do you ever read other thriller writers?

Oh, yes! Gillian Flynn is one of my favourite authors. I’m also a massive fan of Clare Mackintosh, Paula Hawkins and Liane Moriarty. People frequently suggest that psychological thrillers are new in town, but I’d argue that Agatha Christie wrote one or two and I still very much enjoy reading her work.

I don’t only read thrillers though - like most writers, I read a lot and quite a wide variety of fiction, anything by Maggie O’Farrell or Elizabeth Strout is wonderful.

I can tell you that my next book is finished and I’m very excited about it! It’s another dark and twisty novel and will be published in the UK by HarperCollins next March. I’m also thrilled that Legendary Entertainment, (the company behind films such as Inception, Interstellar and The Dark Knight), have bought the TV rights to Sometimes I Lie. I’m looking forward to working with them to bring Amber to life on screen.

Yes - thank you so much for reading Sometimes I Lie! I’m thrilled that so many people are reading it and if you enjoyed my first novel, I hope you might enjoy my next one too. Writers are nothing without readers, thank you.

8. What was the best piece of advice you were ever given?

The best advice I was ever given, was to write a book that you would want to read yourself. I think that advice, along with ‘never give up’, are the most important things to remember if you want to be a writer. It took me a long time and I wish anyone trying to do the same the very best of luck.