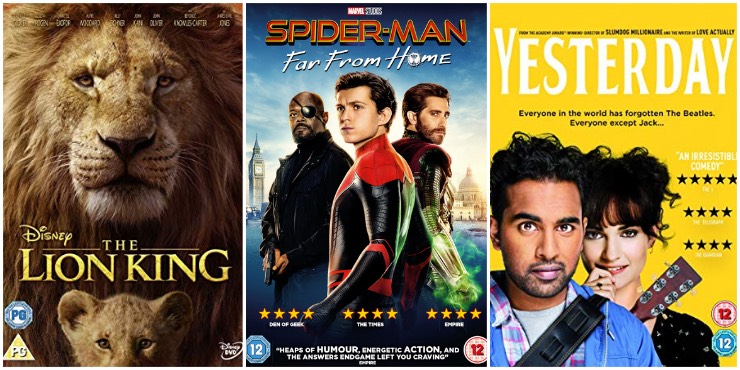 “Jon Favreau directs this remake of the 1994 Disney animation featuring the voice talents of Donald Glover, Chiwetel Ejiofor and Beyoncé.

“After the death of his father, Mufasa (James Earl Jones), young lion cub Simba (Glover/JD McCrary) is destined to become King of the Pride Lands, but is instead forced into exile by his evil and greedy uncle Scar (Ejiofor), who tricks Simba into taking responsibility for his father’s death and claims the throne for himself.

“Away from his family, Simba befriends meerkat Timon (Billy Eichner) and warthog Pumbaa (Seth Rogen) and begins living a carefree life until his best friend Nala (Beyoncé/Shahadi Wright Joseph) convinces him to return home and take his rightful place as ruler of the Pride Lands.”

“Tom Holland reprises his role as the Marvel superhero in this action sequel directed by Jon Watts.

“Following the events of Avengers: Endgame (2019), Peter Parker aka Spider-Man (Holland) takes a much-needed break with his friends. While on holiday, he is visited by Nick Fury (Samuel L. Jackson) who wants to recruit Spider-Man for his team.”

“Danny Boyle directs this musical comedy in which a struggling musician has his world turned upside down after an accident.

“Sick of getting small-time gigs and unable to get his performing career off the ground, musician Jack (Himesh Patel) is about to give it all up when a mysterious cycling accident changes everything. When he comes around and recovers from his head injury, he plays a song by The Beatles for his friends, only to discover that they have never heard of The Beatles and believe that the tune is an original song written by Jack. He begins to use this strange turn of events to his advantage, but when his increasing fame starts to get out of hand Jack starts to question what matters most in life.”

Can you spot Halesworth Library in this film?

“Renowned demonologists Ed and Lorraine Warren (Wilson and Farmiga) think they have finally contained the cursed Annabelle doll when they bring it home, have it blessed by a priest and lock it in a case of sacred glass. However, when the couple depart for the night, leaving their ten-year-old daughter Judy (Grace) alone with teenage babysitters Mary Ellen (Madison Iseman) and Daniela (Katie Sarife), Annabelle continues to cause terror and acts as a beacon for the Warren’s treasure trove of cursed artefacts, which, once awakened, set out to claim Judy’s soul.”

“After falling foul of Emperor Nero (Craig Roberts) teenager Atti (Sebastian Croft) is banished to the outer reaches of the Roman Empire in Britain where the native Celts are revolting against Roman rule. Unlike most Roman soldiers Atti lacks the necessary strength and brawn and is quickly captured by spirited Celt Orla (Emilia Jones).

“Atti’s knowledge of Roman methods allows Orla to gain insights into how best to defeat Emperor Nero’s troops. However, as Atti and Orla’s friendship develops they find themselves on opposing sides when a fierce battle takes place between the Celts and the Romans.”