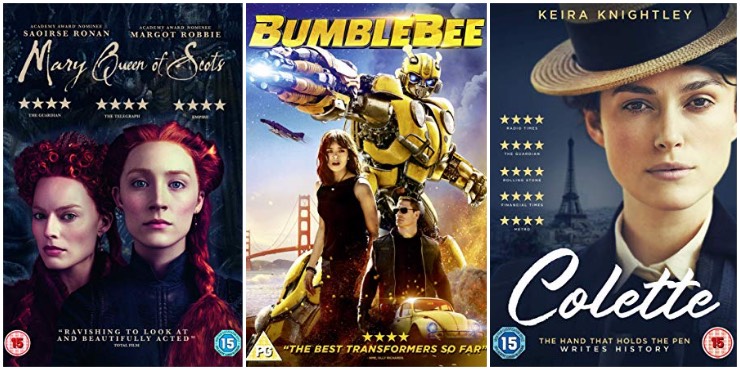 “Queen Anne (Colman) may occupy the throne but it is her co-dependent, Lady Sarah (Rachel Weisz), who makes most of the Monarch’s decisions, leaving The Queen to get on with eating pineapples and racing ducks.

“When Lady Sarah’s cousin, Abigal Masham (Emma Stone), arrives and is given work at the palace as a servant she quickly endears herself to The Queen and threatens Lady Sarah’s status as the favourite. Lady Sarah cannot hide her jealously and a bitter and petty rivalry ensues as both ladies vie for The Queen’s affections.”

“Hailee Steinfeld and John Cena star in this sci-fi action spin-off set in the late 1980s, 20 years before the events of Transformers (2007).

“When teenager Charlie Watson (Steinfeld) gets an old, yellow VW Beetle for her 18th birthday she soon discovers that it is a Transformer, an Autobot named Bumblebee. As their bond grows they encounter other Transformers, but soon find they are Bumblebee’s adversaries and have enlisted the help of Agent Burns (Cena) to try and have him destroyed. Charlie and Bumblebee must then work together to protect one another as well as the rest of the world.”

“Following Unbreakable (2000) and Split (2016), security guard-turned vigilante David Dunn (Willis) hunts down Kevin Wendell Crumb (McAvoy), a disturbed and dangerous being with 24 distinct personalities. Both men are captured and placed in an asylum under the care of psychiatrist Dr Ellie Staple (Sarah Paulson), who specialises in treating those who believe they have supernatural gifts. However, their fellow patient Elijah Price aka Mr Glass (Jackson) enlists Kevin’s help to escape the facility and realise his ambition of revealing their supernatural gifts to the world.”

“Mary Stuart (Ronan) returns to her native Scotland to reclaim her throne at a time when England is ruled by her cousin Elizabeth I (Robbie). Despite both announcing their desire for peace Elizabeth feels threatened by Mary’s legitimate claim to the English throne and when she produces an heir Elizabeth regards this as a direct threat to her sovereignty. This provocation leads Scotland and England closer to war as betrayal and rebellion threaten both thrones.”

“Keira Knightley stars in the title role of this biographical drama.

“After marrying Parisian writer Henry Gauthier-Villars (Dominic West), Gabrielle Colette moves to the French capital where she writes her first novel, an autobiographical tale entitled ‘Claudine’, which is published under her husband’s pen name, Willy, and becomes an instant bestseller. The novel’s success thrusts the couple’s scandalous marriage into the spotlight and inspires a further series of stories.

“However, despite her success as a writer, Colette fails to achieve the acclaim and credit she deserves and must fight to overcome the strict gender norms and constraints of early 20th-century France.”

“In this light-hearted comedy directed by Etan Cohen, Holmes and Watson must find a way of stopping Professor James Moriarty (Ralph Fiennes) from assassinating the Queen (Pam Ferris).”