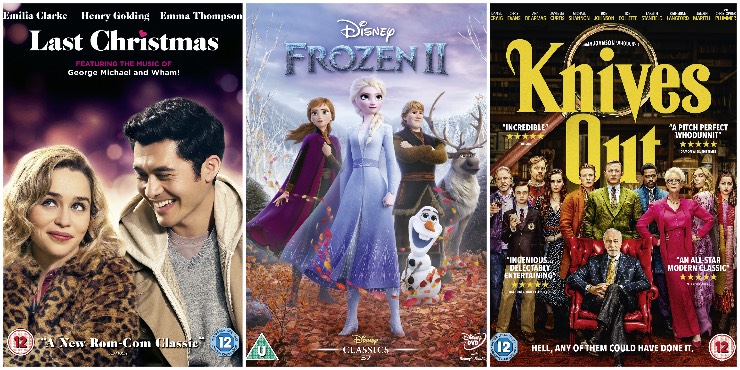 “Three years after the events of Frozen (2013), Elsa (Menzel), now Queen of Arendelle, and her younger sister Anna (Bell) are celebrating the arrival of autumn when Elsa hears a mysterious voice calling out to her from the north. With their kingdom under threat from reawakened elemental spirits, the sisters, joined by Kristoff (Jonathan Groff) and Olaf (Gad), embark on an adventure to the Enchanted Forest as Elsa searches for the source of the voice and seeks answers about the origin of her magical abilities.”

“Kate (Clarke) is a young woman who finds little joy in life, especially in her job working as an elf in a Christmas store. Having had major surgery following a serious illness the year before, Kate now lives life with a more hedonistic approach, much to the dismay of her mother, Adelia (Thompson). With Christmas just around the corner she meets Tom (Henry Golding) who gives her the lift she needs. Soon the pair’s romantic endeavour sees her appreciating her second chance at life and embracing all the magic that Christmas has to offer.”

“To celebrate his 85th birthday, best-selling crime writer Harlan Thrombey (Christopher Plummer) invites his eccentric family, including his three heirs and their children, to attend a party at his mansion. The following morning, however, the patriarch is found dead in an apparent suicide. Renowned private investigator Benoit Blanc (Craig) is hired to deduce the circumstances of the writer’s mysterious demise and quickly surmises there is one guilty party spinning a twisted web of intrigue for him to unravel.”

“Greg Tiernan and Conrad Vernon co-direct this computer-animated comedy remake of the 1991 film based on the original cartoon strip by Charles Addams.

“The strange and macabre Addams family have enjoyed dwelling in their creepy, dilapidated mansion for many years when local reality show host, Margaux Needler (voice of Allison Janney) looks to redevelop the area and evict them. She incites the community to rally against them in an angry mob but meets her match in the danger-loving clan who have no qualms in defending their turf. Little does Margaux know, however, that her daughter, Parker (Elsie Fisher), has befriended the unusual Wednesday Addams (Chloë Grace Moretz) who is hell bent on helping her rebel against her mother.”

“Set 27 years after events in Terminator 2: Judgment Day (1991), the film follows Sarah Connor (Linda Hamilton) as she attempts to put a stop to new liquid metal Terminator Rev-9 (Gabriel Luna) from terminating cyborg Grace (Mackenzie Davis) and Dani Ramos (Natalia Reyes), a young woman who is mysteriously being tracked down by Rev-9.

“Rev-9 proves difficult to beat, however, and so Sarah and The Terminator (Arnold Schwarzenegger) must set aside their differences and team up with Grace to save Dani, whose fate and that of the world is in their hands.”

“Matt Damon and Christian Bale star in this drama centred on the rivalry between Ford and Ferrari at the 1966 24 Hours of Le Mans race.

“Following a failed purchase of Ferrari, Ford CEO Henry Ford II (Tracy Letts) tasks his engineers with designing and building a car capable of ending the winning streak of Enzo Ferrari (Remo Girone)’s dominant Scuderia team at the 1966 Le Mans race. The film follows American engineer Carroll Shelby (Damon) and British war veteran-turned racing driver Ken Miles (Bale) as they team up to produce the Ford GT40, setting speed records and overcoming frequent clashes with one another and the unwanted interference of their corporate superiors in the process.”