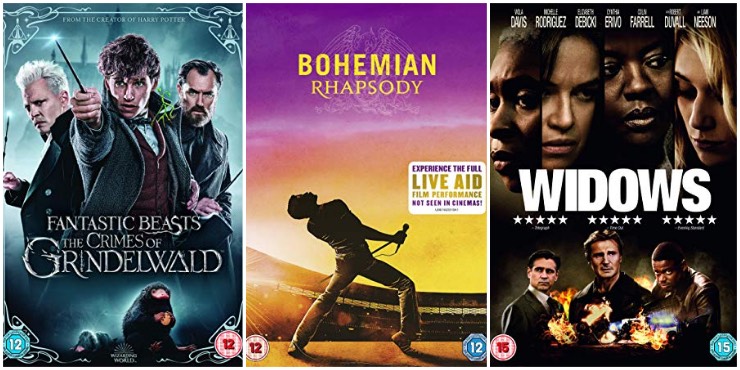 “When relatively unknown English band Smile discover young singer Freddie Mercury just at the time their frontman walks out, everyone’s hopes lift as they finally find the sound they had been missing. Changing their name to Queen, the band become determined to get their music on the radio but find the task increasingly difficult. When they realise their ambitions of becoming a successful band, Freddie shocks everyone by expressing an interest in a solo career.

“As they are invited to perform at the charity Live Aid concert, will Freddie return to his roots and the band that made him famous or will his AIDS diagnosis stop him from performing?”

Fantastic Beasts: The Crimes of Grindelwald

“Eddie Redmayne reprises his role as magizoologist Newt Scamander in this fantasy adventure sequel to Fantastic Beasts and Where to Find Them (2016), directed by David Yates.

“When dark wizard Gellert Grindelwald (Johnny Depp) evades capture from MACUSA, Newt is called upon by his former teacher Albus Dumbledore (Jude Law) to bring Grindelwald to justice once again. Their quest takes the pair to 1920s Paris, where Grindelwald is searching for Obscurial Credence Barebone (Ezra Miller) to help him accomplish his mission of subjugating the entire No-Maj population and leading a new wizarding order.”

“Living in a secluded cave on Mount Crumpet, the Grinch (voice of Benedict Cumberbatch) is outraged when the residents of nearby Whoville decide to make their lavish Christmas celebrations last three times longer this year.

“Fearing his tranquil existence will be disrupted, the Grinch decides to steal Christmas by posing as Santa Claus on Christmas Eve. However, despite his best efforts, a cheerful young girl may get in the way of the Grinch’s sinister schemes…”

“When a heist turns deadly and leaves four men dead, their widows are left not only burdened by grief but of the debt their husbands had acquired in their criminal careers. With pressure mounting and threats being issued to the women to find a means to pay it back fast, Veronica (Viola Davis) decides enough is enough and recruits the wives to pull off a job of their own. Veronica and the widows, Linda (Michelle Rodriguez), Alice (Elizabeth Debicki) and Belle (Cynthia Erivo) get armed and ready to make their own fortune using blueprints left behind by her husband, Harry (Liam Neeson).”

The Nutcracker and the Four Realms

“Based on the story by E.T.A. Hoffmann, the film follows Clara (Foy), a young girl searching for a special key which will unlock a box containing a gift from her mother. At a lavish party on Christmas Eve, Clara’s godfather Drosselmeyer (Morgan Freeman) presents her with a golden thread which will lead her to the key.

“However, after following the thread Clara finds herself transported to a mystical land consisting of four realms where she befriends soldier Philip (Jayden Fowora-Knight) and the Sugar Plum Fairy (Knightley). After then learning that her key is being held in the dark Fourth Realm, Clara and her new friends find themselves coming up against the might of the evil dictator Mother Ginger (Mirren).”

“Disillusioned with life under the tyrannical rule of the Sheriff of Nottingham (Mendelsohn) and the corrupt British crown after returning from the Crusades, courageous bandit Robin of Loxley (Egerton) teams up with Little John (Foxx) and a band of outlaws known as the Merry Men in a bid to fight back.

“Planning to target the treasury in order to steal from the rich and give back to the poor, Robin and his men set out on a daring mission to infiltrate the Sheriff’s forces and take him down from the inside.”