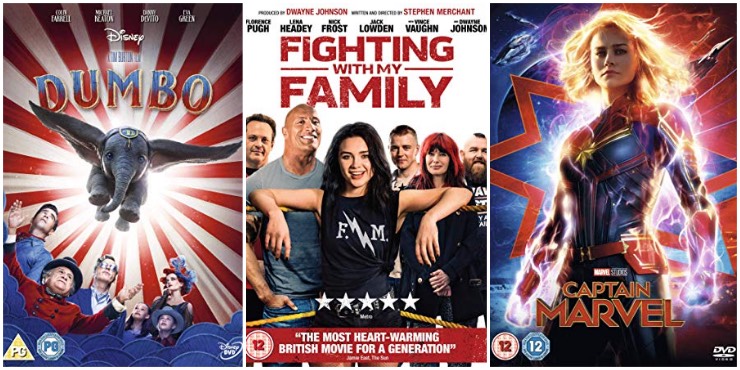 “rie Larson stars as the Marvel Comics superheroine in this sci-fi action adventure co-directed by Anna Boden and Ryan Fleck.

“Vers (Larson) is a powerful Kree warrior, trained by Starforce and eager to fight in the ongoing war against her home planet’s arch-enemy, the shape-shifting Skrulls. In pursuit of Skrull leader Talos (Ben Mendelsohn), Vers travels to Earth in the year 1995 and begins to be plagued by visions of her forgotten past as a pilot in the US Air Force. She teams up with future head of S.H.I.E.L.D. Nick Fury (Samuel L. Jackson) to hunt down Talos, while continuing to search for answers about her true identity.”

“However, war veteran Holt Farrier (Farrell), who cares for Dumbo with the help of his two children, uncovers dark secrets behind Vandevere’s new amusement park, which threaten to bring down the show.”

“Set hundreds of years in the future following a worldwide disaster, the core of the unconscious cyborg Alita (Rosa Salazar) is discovered lying in a scrapyard within Iron City by a cyborg doctor named Dyson Ido (Christoph Waltz). Once Alita is repaired and rebooted, she is unable to recall her past life and the events of what led to her being destroyed.

“As Alita begins to explore Iron City, she utilises her astonishing fighting skills to help hunt down criminals and competes in deadly games. However, soon Alita begins to remember her previous life and when challenged by adversaries starts to realise her true purpose.”

“British comedy drama based on a true story.

“While on a stag weekend in Cornwall, London music executive Danny (Daniel Mays) is tasked with signing a group of local fishermen who perform together as part-time sea shanty singers. Despite the uphill challenge of convincing all of the ten men, who want no part of fame or fortune, to sign with him, Danny embeds himself in the community and succeeds, only to find out from his boss that the idea to sign them was just a big joke. Unwilling to go back on his word, Danny attempts to convince another label to offer them a real contract.”

Fighting With My Family

“Stephen Merchant writes, directs and stars in this biographical comedy drama about a British family of professional wrestlers.

“Saraya ‘Paige’ Bevis (Florence Pugh) and her older brother Zak (Jack Lowden) think their dreams have come true when they are chosen to audition for WWE and get to meet their hero Dwayne ‘The Rock’ Johnson. However, when only Paige is selected to join their training programme she sets off for Florida alone, leaving her family behind in Norwich. After clashing with her fellow female competitors and struggling to impress trainer Hutch Morgan (Vince Vaughn), Paige considers quitting and returning home before finding the courage to chase her dream and succeed for her whole family.”

“Despite being successful at her job as a sports agent Ali Davis (Henson) is constantly being undermined by her male colleagues and never considered for a promotion. However, after visiting a psychic Ali obtains the ability to hear men’s thoughts and she suddenly finds herself with a major advantage over her male counterparts.”