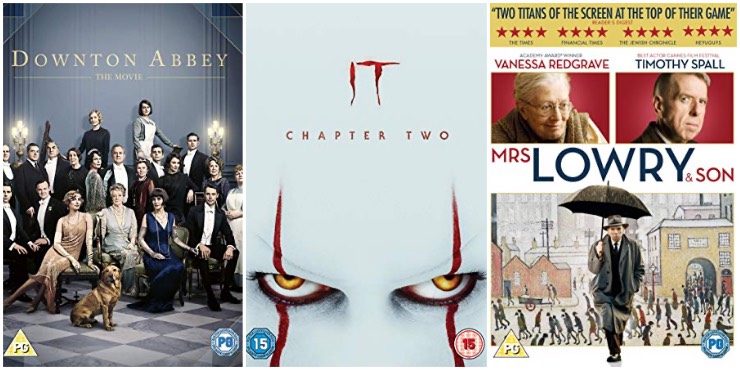 “Michael Engler directs this British period drama following on from events in the popular television series.

“As news arrives of an impending visit from King George V and Queen Mary (Simon Jones and Geraldine James), the Crawleys and the staff of Downton Abbey must ensure that everyone is on their best behaviour. Can they keep up appearances long enough to serve the King and Queen with a pleasant stay?”

“Bill Skarsgård returns to star as Pennywise the clown in this supernatural horror sequel based on the novel by Stephen King.

“27 years after the events of [It](https://suffolk.spydus.co.uk/cgi-bin/spydus.exe/ENQ/OPAC/BIBENQ?BRN=2299401) (2017), the Losers Club return to Derry, Maine to fulfil their childhood oath when Pennywise resurfaces and continues preying on the town’s children. Mike (Isaiah Mustafa), the only member of the group to remain in Derry, informs the others of the monster’s return and summons them back to finish what they started. As they prepare to do battle with Pennywise once again, the friends must confront the trauma of their childhood and face their innermost fears.”

“Constance Wu, Jennifer Lopez and Julia Stiles star in this US drama based on the New York magazine article ‘The Hustlers at Scores’ by Jessica Pressler.

“The film follows Dorothy, aka Destiny (Wu), as she begins working at New York strip club Moves. She is taken under the wing of veteran Ramona (Lopez), who shows Destiny how to profit from her new role. However, when the financial crash hits the club’s business the following year, Ramona and her co-workers begin robbing their wealthy Wall Street clientele with an elaborate scheme that quickly spirals out of control.”

“Two decades after his father left for Neptune on an exploratory space mission never to return, Roy McBride (Pitt) sets out to follow in his footsteps and investigate how his mission might have failed.”

“Adrian Noble directs this biographical drama centred on renowned English artist L. S. Lowry, following Lowry (Timothy Spall) as he draws inspiration from his industrial surroundings and the difficulties he faces in his personal life as he cares for his ailing mother, Elizabeth (Vanessa Redgrave). As well as being barraged with criticism and negativity from his mother, Lowry struggles to contend with critics from the art world and proving himself as a serious painter.”

“Ansel Elgort and Nicole Kidman star in this adaptation of the Pulitzer Prize-winning novel by Donna Tartt.

“During an ill-fated visit to New York’s Metropolitan Museum of Art, Theodore ‘Theo’ Decker (Elgort/Oakes Fegley)’s mother is killed in a bomb attack when he is just 13 years old. In the aftermath of the explosion, Theo takes one of his mother’s favourite paintings, ‘The Goldfinch’ by Carel Fabritius. With no close relatives to care for him, Theo is taken in by the wealthy Barbour family before his absent father reappears and moves him to Las Vegas.

“Returning to New York years later, Theo reconnects with his past but as he does so his childhood theft propels him into more criminal misdeeds.”