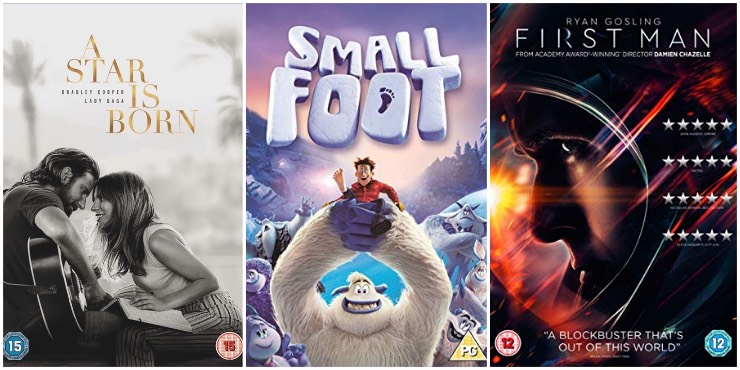 A Star is Born

“Bradley Cooper directs and stars in this romantic musical drama alongside Lady Gaga.

“The film follows troubled country music star Jackson Maine (Cooper) as he meets and falls for aspiring singer-songwriter Ally (Lady Gaga), after seeing her perform at a roadside bar. Recognising her talent, Jackson invites Ally to perform with him and the pair form an onstage partnership that sends her soaring towards pop superstardom. As she strives to achieve her dream, their offstage relationship begins to break down as Jackson struggles to maintain control over his inner demons.”

“Tom Hardy and Michelle Williams star in this sci-fi horror based on the Marvel Comics character.

“Journalist Eddie Brock (Hardy) is stuck in a professional rut and seeks out a story that will revive his career. When he starts investigating the survivalist group known as Life Foundation, Eddie finds himself face-to-face with a symbiotic alien which takes over his body. When Eddie discovers that the symbiote wishes to use his body as a vessel for committing murders on humans, he must try to escape its clutches in order to save his own life.”

“Rowan Atkinson reprises his role as incompetent secret agent Johnny English in this comedy sequel directed by David Kerr. When a sophisticated cyber-attack reveals the identities of all of Britain’s active undercover agents, the government are left with no choice but to turn to English for help.

“Coming out of retirement, English once again teams up with Angus Bough (Ben Miller) and sets out on a dangerous mission to track down the hacker. However, it’s not long before English runs into trouble when he comes across the alluring Ophelia (Olga Kurylenko) while also having problems with the Secret Service’s array of modern gadgets.”

“Having searched the entire mountain to prove the existence of humans, who they call smallfoots, yeti Migo (Tatum) is shocked when he finally discovers a smallfoot on the side of his mountain. However, when he returns to his tribe to tell them of his encounter, Migo is banished for lying and sets out on a quest to prove that smallfoots really do exist, with the help of his friends and the Smallfoot Evidentiary Society. His adventure takes him below the clouds, to the base of the mountain, where he finds another smallfoot, named Percy Patterson (Corden), and takes him back home to clear his name.”

“Damien Chazelle directs this US biographical drama about astronaut Neil Armstrong (Ryan Gosling) as he prepares to lead NASA’s Apollo 11 mission to land a man on the Moon in the late 1960s.

“As pressure begins to mount around the impending mission and recurrent failings of the spacecraft leave the project hanging in the balance, Neil must question whether the need to fulfil mankind’s biggest adventure outweighs the risk of possibly leaving his family behind forever and never returning home.”

“Ari Sandel directs this adventure sequel based on the books by R. L. Stine.

“In the town of Wardenclyffe, teenagers Sonny (Jeremy Ray Taylor) and Sam (Caleel Harris) find a locked manuscript titled Haunted Halloween. Curious, they open the book, but by doing so they unleash a barrage of monsters onto the town. As the evil Slappy the Dummy (voice of Avery Lee Jones) attempts to create an unstoppable monster army, Sonny and Sam must work together to send Slappy and the rest of the monsters back into the book.”