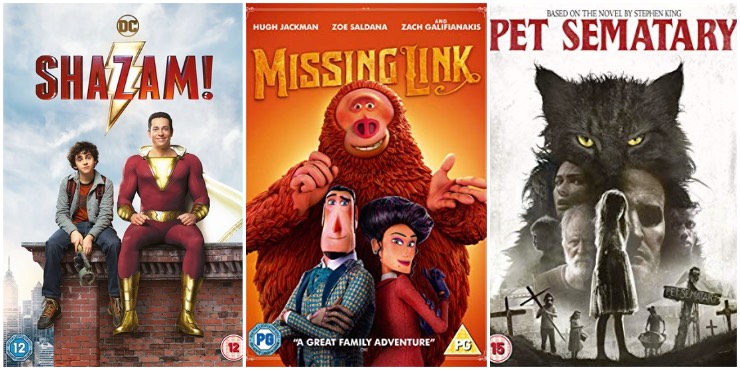 “Teenage orphan Billy Batson (Asher Angel)’s life is changed dramatically when a wizard gives him the power to transform into the adult superhero Shazam (Levi) with the uttering of a magic word. As he adapts to his new identity and learns how to harness his powers, with the help of his foster brother Freddy (Jack Dylan Grazer), Billy finds himself up against Dr Thaddeus Sivana (Mark Strong), who is jealous of Billy’s status as the chosen Champion of Eternity and out for revenge.”

“When she discovers the amusement park of her dreams already exists but has been abandoned, June decides to make the attraction popular once again. During her venture she befriends a number of animals living in the park, but they are under threat from the Chimpanzombies.”

“In search of a legendary creature, said to be the missing evolutionary link between man and beast, Sir Lionel Frost (Jackman) discovers the giant, talking Mr. Link (Galifianakis), the last of his kind, who enlists the help of the monster investigator to find his distant cousins. The duo joins forces with adventurer Adelina Fortnight (Saldana) and set off on an adventure across the globe to find Mr. Link’s distant relatives and potentially make the discovery of the century.”

“Judi Dench stars as an ex-spy with a secret past in this British drama directed by Trevor Nunn.

“Based on real events, the film begins with the arrest of Joan Stanley (Dench/Sophie Cookson), an octogenarian living in London accused of treason. After being brought in for questioning, Joan’s secret life as a KGB spy is exposed.

“While studying physics at Cambridge in the late-1930s, Joan falls in love with Jewish refugee Leo Galich (Tom Hughes) and finds herself drawn into his communist activism. When the Second World War begins, Joan is hired to assist Professor Max Davies (Stephen Campbell Moore) on a top-secret government project but finds her loyalties severely tested.”

“Dr Louis Creed (Clarke) moves with his family to a new home in the country, located next to a pet cemetery and ancient burial ground that is rumoured to bring the dead back to life. When his daughter is killed in a road accident, Louis resorts to burying her in the pet cemetery to test the veracity of the rumours.

“Despite returning from the dead, his daughter is possessed by evil forces and Louis’ delight at her resurrection is short-lived as he faces the horrific ramifications of his meddling between the living and the dead.”

“Having been imprisoned and left the care of her two young children to her mother Marion (Julie Walters), Rose (Jessie Buckley) re-enters society and struggles to adapt to a normal life. Determined to make a name for herself, Rose sets out to become a country singer, but Marion tries to convince her to find a job and provide for her children. Will Rose get her shot at success and prove to her mother that she can raise her children?”