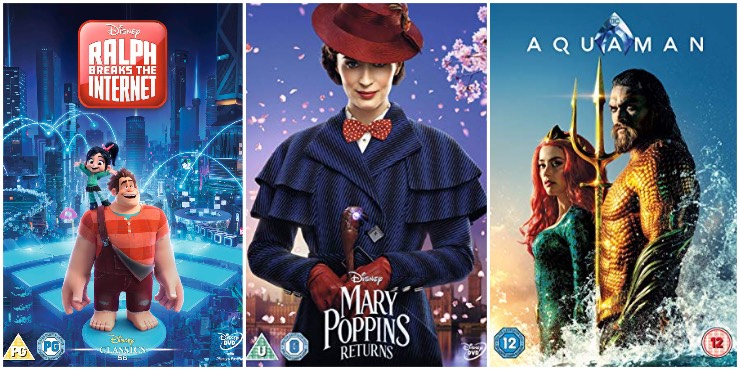 “Emily Blunt stars in the titular role of this musical fantasy sequel.

“In 1930s London, recently widowed Michael Banks (Ben Whishaw) faces losing his family home on Cherry Tree Lane, which he shares with his sister Jane (Emily Mortimer), three children and housekeeper Ellen (Julie Walters), after getting into financial difficulties. At his lowest moment, nanny Mary Poppins returns to lend a helping hand and once again bring a little magic and adventure into the lives of the Banks family.

“Jason Momoa stars as the DC Comics superhero in this action adventure directed by James Wan.

“Heir to the throne of the underwater kingdom of Atlantis, Arthur Curry (Momoa) is raised on the surface world by his human father and trained by Nuidis Vulko (Willem Dafoe) after his mother, Queen Atlanna (Nicole Kidman), is forced to return to her kingdom.

“When his half-brother Orm (Patrick Wilson) declares war on the surface, Arthur reluctantly embraces his destiny and embarks on a quest with fellow Atlantean Mera (Amber Heard) to find the Trident of Atlan and reclaim his rightful place as King of Atlantis.”

“When Vanellope (Silverman)’s Sugar Rush game is unplugged, Ralph (Reilly) decides the best way to fix it is to use the arcade’s new internet connection to go in search of the part they need. As the best friends explore the strange and dangerous online world, Vanellope discovers thrilling new racing game Slaughter Race<?/cite>, where she is finally able to unleash her racing skills.

“Meanwhile, Ralph becomes a viral celebrity, before he accidentally releases a devastating virus and breaks the internet. Can he find a way to repair the damage he has caused and stop Vanellope from leaving him alone in the arcade forever?”

Spider-Man: Into the Spider-Verse

“Animated superhero film based on Marvel Comics character Miles Morales and featuring the voices of Nicolas Cage and Liev Schreiber.

“Brooklyn teen Miles Morales (voice of Shameik Moore) thinks he is the one and only Spider-Man but in the shared multiverse known as the Spider-Verse there are alternate universes and each one has its own version of Spider-Man. When The Kingpin (Schreiber) uses his supercollider and causes these different versions to collide and meet in modern day Brooklyn, the superheroes must work together and use their differences to help save the world.”

“Michael B. Jordan, Sylvester Stallone and Tessa Thompson return to star in this boxing drama sequel, a spin-off of the Rocky film series.

“Despite losing his last fight, Adonis Creed (Jordan) makes his way to the top of the light heavyweight division before a shock championship win. Riding high on his new-found fame, he proposes to girlfriend Bianca (Thompson), who wants Adonis to join her in leaving Philadelphia for a new life in Los Angeles.

“However, Creed is drawn into a vengeful bout with Viktor Drago (Florian Munteanu), the son of the man who killed his father in the ring 30 years ago. When Rocky (Stallone) refuses to train him for the big fight Creed is forced to go it alone but remains determined to finally avenge his father’s death.”

“Set in the future where cities are motorised and capable of consuming smaller traction towns, Thaddeus Valentine (Weaving) is the chief navigator of London, one of the most powerful predator cities in the world. When she was only eight years old Hester Shaw (Hera Hilmar)’s mother (Caren Pistorius) was murdered by Thaddeus. Years later Hester enlists the help of rogue outlaw Anna Fang (Jihae) and outcast Tom Natsworthy (Robert Sheehan) to seek retribution for her mother’s death.”