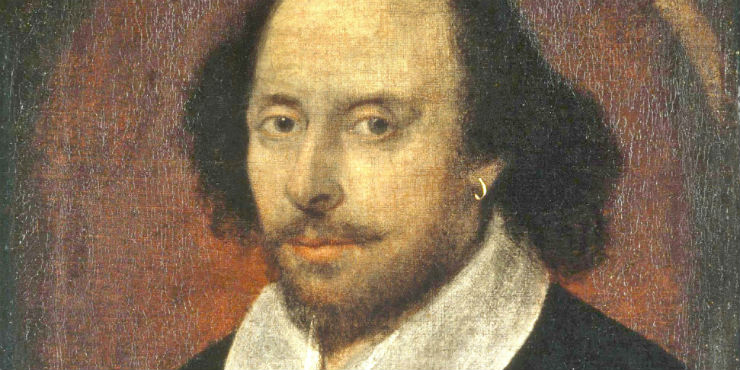 His influence is everywhere. If you’ve ever been “in a pickle”, waited “with bated breath” or gone on “a wild goose chase”, then you’ve been quoting from The Tempest, The Merchant of Venice and Romeo and Juliet respectively.

If you “gossip”, the word comes from A Midsummer Night’s Dream. “The be-all and end-all” is uttered by Macbeth, and “fair play” comes from Miranda in The Tempest. “A heart of gold”? No, not Neil Young, you’ll find it in Henry V, while “the world’s mine oyster” is in The Merry Wives of Windsor. Elvis Presley in Are you Lonesome Tonight says “someone said the world’s a stage”. Yes, that was him too, from As You Like It.

In honour of the Bard and his influence on popular culture, here are some popular works that owe a debt to the Bard.

The Lion King has marked similarities with Shakespeare’s Hamlet. Simba’s uncle Scar kills Mufasa to become King, then a grown-up Simba seeks vengeance on Scar, after seeing a vision of his father’s ghost, of course. And don’t forget the comical Rosencrantz and Guildenstern-esque Timon and Pumbaa.

10 things I hate about you

Bianca (Larisa Oleynik) can’t date Cameron (Joseph Gordon-Levitt) until her shrewish older sister Katherina (Julia Stiles) dates, so they set her up with bad boy Patrick (Heath Ledger). Bianca is Bianca, Katherina is Katherina, Patrick is Petruchio, and Cameron is Lucentio — Cameron even disguises himself as a language tutor, just as Lucentio does in Taming of the Shrew. I don’t recall Shakespeare writing ‘the s*** hath hitteth the fan’ though…

Something wicked this way comes by Ray Bradbury

Only a single witch in Ray Bradbury’s 1962 dark fantasy novel, but the quote is from Macbeth.

Dora and Nora Chance are a famous song-and-dance team of the British music halls. Billed as The Lucky Chances, the sisters are the illegitimate and unacknowledged daughters of Sir Melchoir Hazard, the greatest Shakespearean actor of his day. The book is written in five chapters just as a Shakespearian play often had five acts.

Me and Orson Welles by Robert Kaplow

Coming of age story set in 1930s Manhattan. 17 year old Richard Samuels gets himself a walk on part in Orson Welles’s Broadway version of Julius Caesar by wildly exaggerating his abilities to sing and play ukulele amongst other things. How will he combine it with his school commitments and what will his mother say?

The fault in our stars by John Green

The tragic novel about two teenage cancer patients takes its title from a quote in Julius Caesar.

Othello was used as a template for Mal Peet’s novel of racial politics and celebrity.

The gap of time by Jeanette Winterson

King Leontes – whose accusations of adultery against his wife, Hermione, and Polixenes, his childhood friend, galvanise the action in The Winter’s Tale – becomes Leo, a hedge fund manager who uses money and status to bludgeon his way through the world. This is the first commission in a series of top writers – Margaret Atwood, Anne Tyler and Howard Jacobson, reimagining Shakespeare’s plays for the 21st Century. Look out for more in the series in 2016.

Matt Haig’s pastiche of Hamlet. 11-year-old Phillip is visited by his father Brian’s ghost. His father confesses that he was murdered by his brother Alan and that Phillip must avenge his murder and prevent Alan from taking over the family pub and marrying his widow.

The title comes from The Tempest and the quote is used in the book when John looks at a society consumed by technology and the pursuit of pleasure.

Sigh no more by Mumford and Sons

Sigh No More is the first song on the album; the line is from Much Ado About Nothing. There are also quotes from Macbeth, such as “Stars hide your fires”.

Perhaps not one for the purists. Shakespeare’s story of doomed love is transposed to the world of the suburban front lawn as lovestruck garden gnomes Gnomeo (voiced by James McAvoy) and Juliet (Emily Blunt) find themselves caught up in a feud between the next-door neighbours to whom they belong. Can they find a way to be together despite the many everyday garden obstacles that stand in their way?

Exit Music (For A Film) from OK Computer by Radiohead

This song was originally written to play over the end credits of Baz Luhrmann’s 1996 Romeo and Juliet (although it didn’t make it onto the soundtrack), but Thom Yorke says it was also inspired by Shakespeare’s play itself and Zeffirelli’s 1960s Romeo And Juliet film.

A thousand acres by Jane Smiley

When Larry Cook, the ageing patriarch of a rich, thriving farm in Iowa, decides to retire, he offers his land to his three daughters. For Ginny and Rose, who live on the farm with their husbands, the gift makes sense – a reward for years of hard work, a challenge to make the farm even more successful. But the youngest, Caroline, a Des Moines lawyer, flatly rejects the idea, and in anger her father cuts her out, setting off an explosive series of events that will leave none of them unchanged. King Lear, anyone?