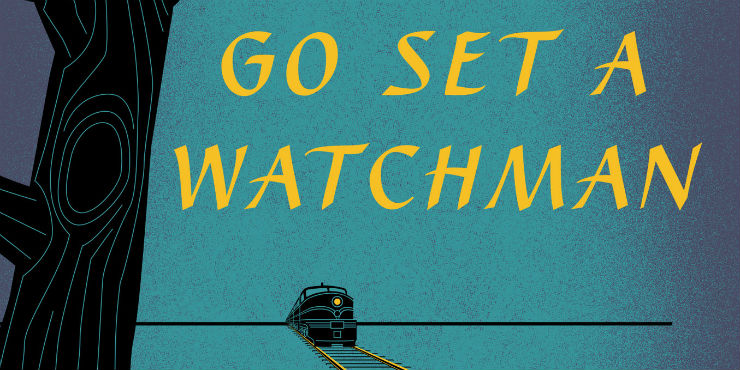 A genuine literary event. Harper Lee returned with her first book for 55 years. Scout (Jean Louise Finch) has returned to Maycomb from New York to visit her father Atticus. She is forced to grapple with issues both personal and political as she tries to understand both her father’s attitude toward society and her own feelings about the place where she was born and spent her childhood. Of course it could never live up to To kill a mockingbird, but it is an impressive standalone work which captures Alabama on the brink of civil rights turmoil. It is a book that will divide readers. I loved the leisurely pace of the story, the subtle humour and I found the discussions between father and grown up daughter very moving.

Make me by Lee Child

Suffolk Library readers love Lee Child. We were given a September release date for this, but somehow people knew all about it months before it appeared. As soon as we put the catalogue entry up people started reserving it, a full three months before publication. To date we have had in excess of 600 reservations on the hardback book which is simply amazing. For the record, it is a story about Child’s hero Jack Reacher who has a stopover in a one horse town and finds a woman waiting for a missing private investigator, a cryptic note about 200 deaths, and a small town full of silent, watchful people.

The girl on the train by Paula Hawkins

In early 2015 we started hearing a buzz around this book. We bought 10 to meet the demand, then another 10 but the waiting list kept rising, eventually exceeding 400. This was unusual as it was a first novel. This one novel accounts for over 1300 issues in Suffolk Libraries in 2015.

In October I attended a staff development day where Nicola Upson was one of the speakers. She was a fascinating speaker and she told a story about her research reading the local books in Bury St. Edmunds Library when she was an aspiring writer. This is her latest book and is another in her Josephine Tey series.

This illustrates one of the trends in publishing; the rise of the vlogger. Dan Howell and Phil Lester, AKA danisnotonfire and AmazingPhil, post quirky comedy videos, about their lives and observations on the world and have earned a following of over 8 million subscribers across their channels. It makes no claims to be great literature and I am certainly not the demographic they are aiming for but they represent an interesting phenomenon.

Dark corners is the last book by the late and much missed Ruth Rendell. A writer described by Patricia Cornwell as “unequivocally the most brilliant crime writer of our time.” She had deep roots in Suffolk and local places often featured in her books. Sudbury features in Gallowglass, and Bury St. Edmunds in The brimstone wedding. A fatal inversion includes Polstead and Nayland, while Orford and Aldeburgh are found in No night is too long.

A brief history of seven killings by Marlon James

Every year the Man Booker Prize is announced. Excitement builds with the publication of the longlist and everyone tries to second guess what is going to win. We buy all the contenders but until it is announced we do not know how many to stock and what the demand will be. This year Marlon James won it with a book about the attempted assassination of Bob Marley. In many ways it was a brave choice by the judges. The novel has 76 characters and is uncompromising in terms of language and violence.

A Man Called Ove is our word of mouth title for 2015. Ove is a cantankerous misanthrope. A nosy and obsessed neighbour, he’s a stickler for rules and enjoys ensuring that others abide by community protocols. But Ove is exceptional. He’s had to cope with loss in his life and the backstory is revealed bit by bit. He’s a complex man, with high values and moral standards. He’s a shrewd judge of people and character and despite his apparent grumpiness, he has depths of kindness and understanding. This is one that will have you crying and laughing and is sure to be a book group favourite for some time to come.

Threads: the delicate life of John Craske by Julia Blackburn

Every year there is a non-fiction title on an obscure subject that everyone wants to read. Last year it was Thomas Piketty’s Capital in the twenty-first century. The accolade this year goes to Julia Blackburn’s book Threads about John Craske.

Craske, a Norfolk fisherman, was born in 1881 and in 1917, when he had just turned 36, he fell seriously ill. For the rest of his life he kept moving in and out of what was described as ‘a stuporous state’. In 1923 he started making paintings of the sea and boats and the coastline seen from the sea, and later, when he was too ill to stand and paint, he turned to embroidery, which he could do lying in bed. His embroideries were also of the sea, including his masterpiece, a huge embroidery of The Evacuation of Dunkirk. Very few facts about Craske are known, and only a few scattered photographs have survived but this book seems to have caught the imagination.

The road to Little Dribbling: more notes from a small island by Bill Bryson

I have included this as a feel good title. Let me say first of all it is not as good as Notes from a small island, but there is more than enough here to amuse. Bryson has a low tolerance threshold for poor service in shops, poor spelling and random apostrophes and he seems to be getting grumpier with age. His take on celebrity culture and the Katie Price phenomenon is priceless.