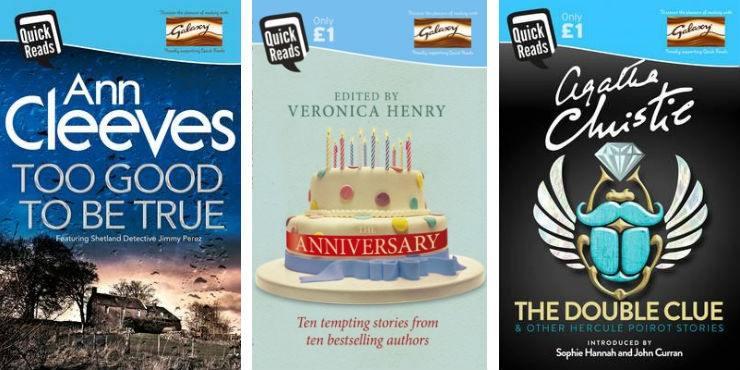 Quick Reads, the publisher of short accessible titles written by popular authors, celebrates its 10th anniversary this year. Quick Reads aims to break down barriers to reading, since 1 in 6 adults in the UK struggle with reading, and 1 in 3 do not read for pleasure. Suffolk Libraries has supported Quick Reads for many years and will stock all the titles in 2016 as we have in previous years. There is an excellent selection of titles this year — why not give one a go?

The anniversary by Various authors

The double clue and other Hercule Poirot stories by Agatha Christie

A perfect introduction to Agatha Christie – four of the best Hercule Poirot stories, chosen for their readability and sense of adventure.

Too good to be true by Ann Cleeves

When young teacher Anna Blackwell is found dead in her home, the police think her death was suicide or a tragic accident. After all, Stonebridge is a quiet country village in the Scottish Borders, where murders just don’t happen. But Detective Inspector Jimmy Perez soon arrives from far-away Shetland when his ex-wife, Sarah, asks him to look into the case. The local gossips are saying that her new husband, Tom, was having an affair with Anna. Could Tom have been involved with her death? Sarah refuses to believe it – but needs proof. Anna had been a teacher. She must have loved kids. Would she kill herself knowing there was nobody to look after her daughter? She had seemed happier than ever before she died. And to Perez, this suggests not suicide, but murder.

A baby at the beach cafe by Lucy Diamond

Evie loves running her beach cafe in Cornwall but with a baby on the way, she’s been told to put her feet up. Let someone else take over? Not likely. Helen’s come to Cornwall to escape the stress of city living. She hopes a seaside life will be the answer to all her dreams. When she sees a job advertised at the cafe it sounds perfect. But the two women clash and sparks fly, and then events take a dramatic turn. Can the pair of them put aside their differences in a crisis?

On the rock by Andy McNab

This is the call he is always ready for. They’ve had word of a planned attack. That’s why he’s back here, opposite some suit who’s trying to tell him what he needs to do. But he knows exactly what’s required. Four men. Plain clothes. Eyes peeled. Three targets. Two cases. One car. Gibraltar isn’t an ideal location. Too many people. Too many blind alleys. But then again, he’s not the terrorist. Who knows what goes through their minds? Well, he will soon. If everything goes to plan.

I am Malala: the girl who stood up for education and was shot by the Taliban by Malala Yousafzai and Christine Lamb

Malala tells the inspiring story of a schoolgirl who was determined not to be intimidated by extremists, and faced the Taliban with immense courage. Malala speaks of her continuing campaign for every girl’s right to an education, shining a light into the lives of those children who cannot attend school.