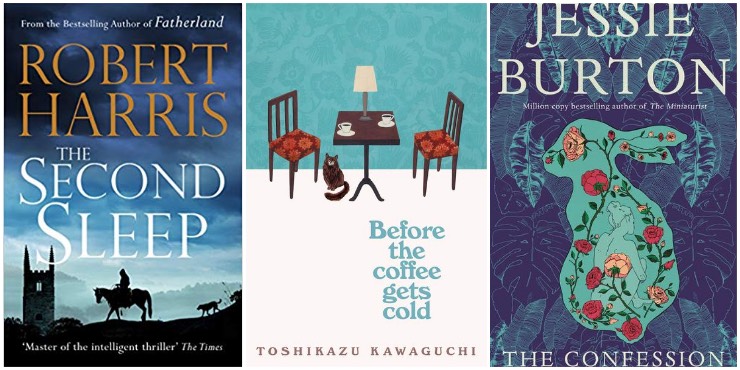 Sequel to The Handmaid’s Tale, and for many the publishing event of the year. This will be everywhere so get your reservation in quickly.

The Dutch House, by Ann Patchett

“Danny Conroy grows up in the Dutch House, a lavish folly in small-town Pennsylvania taken on by his property developer father. Though his father is distant and his mother is absent, Danny has his beloved sister Maeve: Maeve, with her wall of black hair, her delicacy, her brilliance. Life is comfortable and coherent, played out under the watchful eyes of the house’s former owners in the frames of their oil paintings, or under the cover of the draperies around the window seat in Maeve’s room.

“Then one day their father brings Andrea home: Andrea, small and neat, a dark hat no bigger than a saucer pinned over a twist of her fair hair. Though they cannot know it, Andrea’s advent to the Dutch House sows the seed of the defining loss of Danny and Maeve’s lives.”

The Secrets We Kept, by Lara Prescott

Fictionalisation of the story of how Boris Pasternak’s novel Doctor Zhivago was smuggled out of Soviet Russia, focussing on the role played by two female CIA agents who were recruited from the typing pool.

The Second Sleep, by Robert Harris

“1468. A young priest, Christopher Fairfax, arrives in a remote Exmoor village to conduct the funeral of his predecessor. The land around is strewn with ancient artefacts - coins, fragments of glass, human bones - which the old parson used to collect. Did his obsession with the past lead to his death? As Fairfax is drawn more deeply into the isolated community, everything he believes - about himself, his faith and the history of his world - is tested to destruction.”

Before the Coffee Gets Cold, by Toshikazu Kawaguchi

This must have been a wonderful book to pitch. A small Japanese café offers its customers the chance to travel back in time but they must return to the present before their coffee gets cold…

“In a small back alley in Tokyo, there is a café which has been serving carefully brewed coffee for more than one hundred years. But this coffee shop offers its customers a unique experience: the chance to travel back in time.

“In this novel, we meet four visitors, each of whom is hoping to make use of the café’s time-travelling offer, in order to: confront the man who left them, receive a letter from their husband whose memory has been taken by early onset Alzheimer’s, to see their sister one last time, and to meet the daughter they never got the chance to know.

“But the journey into the past does not come without risks: customers must sit in a particular seat, they cannot leave the café, and finally, they must return to the present before the coffee gets cold. Toshikazu Kawaguchi’s beautiful, moving story explores the age-old question: what would you change if you could travel back in time?”

The Inheritance of Solomon Farthing, by Mary Paulson-Ellis

“An heir hunter in modern-day Edinburgh searches out the rightful inheritor to a dead man’s fortune - an investigation that will lead him to the battlefields of WWI France, and the mystery of a six-man firing squad.”

This one will have you thinking twice next time you step into a lift.

A lift in a Manhattan skyscraper goes up to the top floor then plummets to the bottom of the lift shaft, killing everyone. When it happens again and again across the city, the race is on to find out who is responsible and why.

This Is Happiness, by Niall Williams

“Change is coming to Faha, a small Irish parish that hasn’t changed in 1000 years. For one thing, the rain is stopping. Nobody remembers when it started; rain on the western seaboard is a condition of living. But now - just as Father Coffey proclaims the coming of the electricity - the rain clouds are lifting.

“17-year-old Noel Crowe is idling in the unexpected sunshine when Christy makes his first entrance into Faha, bringing secrets he needs to atone for. Though he can’t explain it, Noel knows right then: something has changed.

“As the people of Faha anticipate the endlessly procrastinated advent of the electricity, and Noel navigates his own coming-of-age and his fallings in and out of love, Christy’s past gradually comes to light, casting a new glow on a small world.”

The Confession, by Jessie Burton

“One winter’s afternoon on Hampstead Heath in 1980, Elise Morceau meets Constance Holden and quickly falls under her spell. Connie is bold and alluring, a successful writer whose novel is being turned into a major Hollywood film.

“Elise follows Connie to LA, a city of strange dreams and swimming pools and late-night gatherings of glamorous people. But whilst Connie thrives on the heat and electricity of this new world where everyone is reaching for the stars and no one is telling the truth, Elise finds herself floundering. When she overhears a conversation at a party that turns everything on its head, Elise makes an impulsive decision that will change her life forever.

“Three decades later, Rose Simmons is seeking answers about her mother, who disappeared when she was a baby.”

“Andrew, the manager of Shanamore Holiday Cottages, watches his only guest via a hidden camera in her room. One night the unthinkable happens: a shadowy figure emerges onscreen, kills her and destroys the camera. But who is the murderer? How did they know about the camera? And how will Andrew live with himself?

“Natalie wishes she’d stayed at home as soon as she arrives in the wintry isolation of Shanamore. There’s something creepy about the manager. She wants to leave, but she can’t - not until she’s found what she’s looking for.”

“Consumption has ravaged Louise Pinecroft’s family, leaving her and her father alone and heartbroken. But Dr Pinecroft has plans for a revolutionary experiment: convinced that sea air will prove to be the cure his wife and children needed, he arranges to house a group of prisoners suffering from the same disease in the cliffs beneath his new Cornish home. While he devotes himself to his controversial medical trials, Louise finds herself increasingly discomfited by the strange tales her new maid tells of the fairies that hunt the land, searching for those they can steal away to their realm.

“40 years later, Hester Why arrives at Morvoren House to take up a position as nurse to the now partially paralysed and almost entirely mute Miss Pinecroft. Hester has fled to Cornwall to try and escape her past, but surrounded by superstitious staff enacting bizarre rituals, she soon discovers that her new home may be just as dangerous as her last.”

For Emily, by Katherine Slee

Debut novel. When a beloved children’s author dies suddenly her reclusive grandaughter to whom each book is dedicated sets out to track down a lost manuscript from the clues provided.