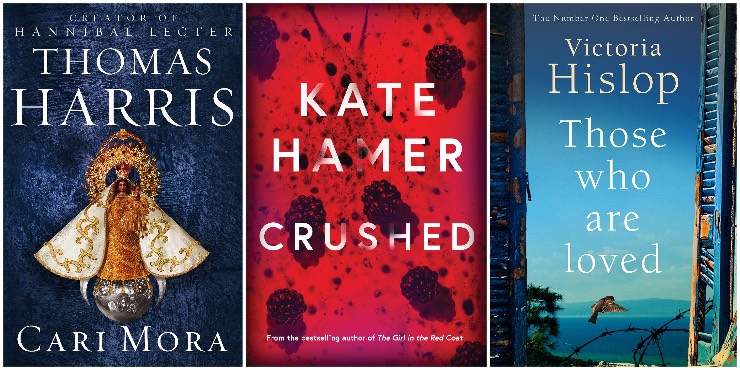 First novel in 13 years from the creator of Dr Hannibal Lecter. This is a standalone novel about a ruthless man desperate to find $25 million of cartel gold buried underneath a Miami Beach mansion.

“Twenty-five million dollars in cartel gold lies hidden beneath a mansion on the Miami Beach waterfront. Ruthless men have tracked it for years. Leading the pack is Hans-Peter Schneider. Driven by unspeakable appetites, he makes a living fleshing out the violent fantasies of other, richer men.

“Cari Mora, caretaker of the house, has escaped from the violence in her native country. She stays in Miami on a wobbly Temporary Protected Status, subject to the iron whim of ICE. She works at many jobs to survive. Beautiful, marked by war, Cari catches the eye of Hans-Peter as he closes in on the treasure. But Cari Mora has surprising skills, and her will to survive has been tested before. Monsters lurk in the crevices between male desire and female survival.”

The Porpoise, by Mark Haddon

Long awaited new book from the author of The Curious Incident of the Dog in the Night-time. The new book is an eccentric retelling of Pericles, Prince of Tyre, that leaps between ancient and modern.

“A newborn baby is the sole survivor of a terrifying plane crash. She is raised in wealthy isolation by an overprotective father. She knows nothing of the rumours about a beautiful young woman, hidden from the world. When a suitor visits, he understands far more than he should. Forced to run for his life, he escapes aboard The Porpoise, an assassin on his tail.

“So begins a wild adventure of a novel, damp with salt spray, blood and tears. A novel that leaps from the modern era to ancient times; a novel that soars, and sails, and burns long and bright; a novel that almost drowns in grief yet swims ashore; in which pirates rampage, a princess wins a wrestler’s hand, and ghost women with lampreys’ teeth drag a man to hell - and in which the members of a shattered family, adrift in a violent world, journey towards a place called home.”

Anna of Kleve, Queen of Secrets, by Alison Weir

Next Tudor Queen in Alison Weir’s popular series. Alison found some new evidence in her research for this novel, so expect some surprises.

“The King is in love with Anna’s portrait, but she has none of the accomplishments he seeks in a new bride. She prays she will please Henry, for the balance of power in Europe rests on this marriage alliance. But Anna’s past is never far from her thoughts, and the rumours rife at court could be her downfall. Everyone knows the King won’t stand for a problem queen.”

Debut novel that is reminiscent of John Fowles’ The Collector.

Those Who Are Loved, by Victoria Hislop

Victoria Hislop’s fifth novel and one of the biggest titles released in May.

“Themis grows up during the brutal German occupation of Greece. In the subsequent Civil War, the country is polarised between Right and Left and Themis’ family is bitterly divided.

“During the violent five-year struggle for control of the country, she fights for Communists and is seduced by the leader of her rebel band. Captured and sent to the notoriously cruel islands of exile, Makronisos and Trikeri, Themis gives birth to a son, Angelos.”

The Farm, by Joanne Ramos

“Ambitious businesswoman Mae Yu runs Golden Oaks - a luxury retreat transforming the fertility industry - where women get the very best of everything, so long as they play by the rules.

“Jane is a young immigrant in search of a better future. Stuck living in a cramped dorm with her baby daughter and her shrewd aunt Ate, she sees an unmissable chance to change her life. But at what cost?”

The Furies, by Katie Lowe

“1998. A sixteen-year-old girl is found dead on school property, dressed in white and posed on a swing. No known cause of death. Four girls know what happened. And until now they’ve kept their silence.

“Violet is returning home, back to the sleepy coastal town which holds so many memories. In 1998, after a tragic accident claims the lives of her father and sister, she joins Elm Hollow Academy, a private girls’ school with an unpleasant history of 17th century witch trials. There she is drawn to Robin, Grace, Alex and their charismatic teacher, Annabel; she is invited to join them in their advanced study group.

“There they learn about art, literature and the grisly history of the school. Though Annabel claims her classes aren’t related to ancient rites and rituals, she warns them off the topic, describing it as little more than mythology.”

“Phoebe stands on Pultenay Bridge trying to cover her face with her hair so she won’t be recognized. Her tights are gashed from toe to thigh. She has lost a shoe. People keep looking. Was it five, or ten minutes later she heard the commotion? Phoebe ran down the road until she saw. Mangled metal. Blood ran down the walls.

“Phoebe believes this was of her making. She thought murder, and murder happened. She had told them her thoughts weren’t just thoughts and now she must live with the consequences.”

“In Brexit Britain, a young transgender doctor called Ry is falling in love - against their better judgement - with Victor Stein, a celebrated professor leading the public debate around AI. Meanwhile, Ron Lord, just divorced and living with Mum again, is set to make his fortune launching a new generation of sex dolls for lonely men everywhere. Across the Atlantic, in Phoenix, Arizona, a cryogenics facility houses dozens of bodies of men and women who are medically and legally dead but waiting to return to life.

“But the scene is set in 1816, when nineteen-year-old Mary Shelley writes a story about creating a non-biological life-form.”

My Lovely Wife, by Samantha Downing

Tale of a married couple who like to get away with murder.

“Every marriage has secrets. Everyone has flaws. Your wife isn’t perfect - you know that - but then again nor are you. But now a serial killer is on the loose in your small town, preying on young women. Fear is driving your well-behaved young daughter off the rails, and you find yourself in bed late at night, looking at the woman who lies asleep beside you. Because you thought you knew the worst about her. The truth is you know nothing at all.”

“A man waits at a London airport for Ingrid Ostermann, the love of his life, to arrive. Across the Atlantic, a retired NYPD cop waits in a bar in Florida’s Key West for his first date with the lady who is, without question, his soulmate. The two men are about to discover they’ve been scammed out of almost every penny they have in the world - and that neither women exist.

“Meanwhile, a wealthy divorcée plunges, in suspicious circumstances, from an apartment block in Munich. In the same week, Detective Superintendent Roy Grace is called to investigate the suicide of a woman in Brighton, that is clearly not what it seems. As his investigations continue, a handsome Brighton motivational speaker comes forward. He’s discovered his identity is being used to scam eleven different women, online.”

Re-discovered adventure thriller which was due to be published in 1972 but then ‘lost’. A tale of murder, corruption and hijack in the Caribbean.