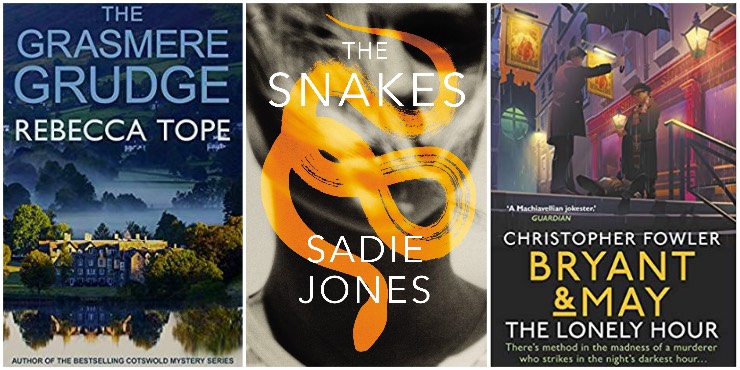 The third in Smith’s seasonal quartet.

“Spring will come. The leaves on its trees will open after blossom. Before it arrives, a hundred years of empire-making. The dawn breaks cold and still but, deep in the earth, things are growing.”

The Snakes, by Sadie Jones

Sadie Jones already has quite some pedigree, with a Costa First Novel Award, a nomination for the Orange Prize and her novel The Outcast adapted by the BBC. All the early reviews suggest this is even better. It is a story of the effects of money, greed and corruption.

“Bea and Dan, recently married, rent out their tiny flat to escape London for a few precious months. Driving through France they visit Bea’s dropout brother Alex at the hotel he runs in Burgundy. Disturbingly, they find him all alone and the ramshackle hotel deserted, apart from the nest of snakes in the attic.

“When Alex and Bea’s parents make a surprise visit, Dan can’t understand why Bea is so appalled, or why she’s never wanted him to know them; Liv and Griff Adamson are charming, and rich. They are the richest people he has ever met. Maybe Bea’s ashamed of him, or maybe she regrets the secrets she’s been keeping.

“Tragedy strikes suddenly, brutally, and in its aftermath the family is stripped back to its rotten core, and even Bea with all her strength and goodness can’t escape.”

Unto Us a Son Is Given, by Donna Leon

The 28th novel in the ever popular series. Comissario Guido Brunetti investigates when a woman is strangled in her Venice hotel room.

“Brunetti’s father-in-law, the Count Falier, urges Brunetti to investigate and intervene in the seemingly innocent plan of the Count’s best friend, the elderly Gonzalo Rodríguez de Tejeda, to adopt a much younger man as his son. Under Italian inheritance laws this man would become heir to Gonzalo’s entire fortune, a prospect Gonzalo’s friends find appalling. For his part, Brunetti wonders why the old man can’t be allowed his pleasure in peace.

“Not long after Gonzalo unexpectedly passes away, one of Gonzalo’s oldest friends, just arrived in Venice for the memorial service, is strangled in her hotel room. Now with an urgent case to solve, Brunetti is drawn reluctantly into the long-hidden mystery in Gonzalo’s life that ultimately led to murder.”

A Gift for Dying, by M. J. Arlidge

“Adam Brandt is a forensic psychologist, well used to dealing with the most damaged members of society. But he’s never met anyone like Kassie. The teenager claims to have a terrible gift - with one look into your eyes, she can see when and how you will die. Obviously, Adam knows Kassie must be insane.

“But then a serial killer hits the city. And only Kassie seems to know where he’ll strike next. Against all his intuition, Adam starts to believe her. He just doesn’t realise how deadly his faith might prove.”

The Boy in the Headlights, by Samuel Bjørk

The author of I’m Travelling Alone returns with a tale of a serial killer in Oslo choosing victims at random. If you like Jo Nesbo, you will probably enjoy this one.

“Winter 1999. An old man is driving home when his headlights catch an animal on the empty road up ahead. He stamps hard on the brakes. But it is not an animal at all. It is a young boy, frightened and alone, with a set of deer antlers strapped firmly to his head.

“Fourteen years later, a body is found in a mountain lake. Within weeks, three people have died. Each time, the killer has left a clue, inviting Special Investigations Detectives Munch and Krüger to play a deadly game - a game they cannot possibly win. Against the most dangerous and terrifying kind of serial killer. One who chooses their victims completely at random.”

The Lonely Hour, by Christoper Fowler

The latest adventure for Bryant and May of the Peculiar Crimes Unit.

“On a rainy winter night outside a run-down nightclub in the wrong part of London, four strangers meet for the first time at 4:00am. A few weeks later the body of an Indian textile worker is found hanging upside down inside a willow tree on Hampstead Heath. The Peculiar Crimes Unit is called in to investigate.

“The victim was found surrounded by the paraphernalia of black magic, and so Arthur Bryant and John May set off to question experts in the field. But the case is not what it appears. When another victim seemingly commits suicide, it becomes clear that in the London night is a killer who knows what people fear the most.”

The American Agent, by Jacqueline Winspear

“When Catherine Saxon, an American correspondent reporting on the war in Europe, is found murdered in her London digs, news of her death is concealed by British authorities. Serving as a linchpin between Scotland Yard and the Secret Service, Robert MacFarlane pays a visit to Maisie Dobbs, seeking her help. Accompanied by an agent from the US Department of Justice - Mark Scott, the American who helped Maisie escape Hitler’s Munich in 1938 - he asks Maisie to work with Scott to uncover the truth about Saxon’s death.

“As the Germans unleash the full terror of their blitzkrieg upon the citizens of London, raining death and destruction from the skies, Maisie must balance the demands of solving this dangerous case with her need to protect the young evacuee she has grown to love.”

The Grasmere Grudge, by Rebecca Tope

Any new book by Rebecca Tope attracts a waiting list. This will be no exception.

“Returning from a much-needed holiday, Persimmon ‘Simmy’ Brown discovers that life in the Lake District is, as ever, far from relaxing. Before she can enjoy the idea of being the future Mrs Chris Henderson, her fiancé discovers the body of his friend, antique dealer Jonathan Woolley, brutally strangled in a house in Grasmere.

“Enlisting the help of her friends and amateur detectives Ben and Bonnie, the investigation appears to ask more questions than it answers as historical grudges against the dead man are revealed. It seems that many people had a reason for wanting him dead. But with Chris’s increasingly evasive and odd behaviour, Simmy begins to wonder if he is more involved in the murder than he is saying. How can she put her trust in a man with something to hide?”

Max Porter’s follow-up to the award-winning Grief is the Thing with Feathers is another stunning experimental novel.

Reasons to be Cheerful, by Nina Stibbe

Nina Stibbe’s latest novel takes the reader back to 1970s Britain through the eyes of 18 year old Lizzie Vogel.

“Lizzie Vogel is about to embark on grown-up life as she moves from the sheltered village existence of her family home and into the big, wide, metropolis that is Leicester. There she takes up the pioneering position of dental nurse to a dentist with bad teeth - and some deeply unpleasant attitudes.

“In her tiny one-bedroomed flat, Lizzie reflects on all that she’s learning: whether she’ll have to hold her boss’s cigarette while he smokes it, whether she wants a boyfriend and, if she does, whether it should be Andy Nicolello who delivers the patients’ dentures; and if it is Andy Nicolello whether it’s dangerous to allow him to become her mother’s lodger.

“Slowly it dawns on Lizzie that the area in which she has most to learn is life: in taking those first wobbly steps to independence, in falling in love, in navigating the ups and downs of adulthood and, most importantly, in staying cheerful through it all.”