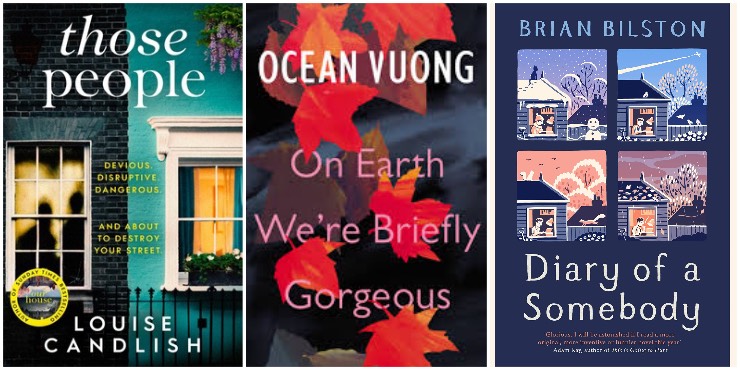 “Jackson Brodie has relocated to a quiet seaside village in North Yorkshire, in the occasional company of his recalcitrant teenage son Nathan and ageing Labrador Dido, both at the discretion of his former partner Julia. It’s a picturesque setting, but there’s something darker lurking behind the scenes. Jackson’s current job, gathering proof of an unfaithful husband for his suspicious wife, seems straightforward, but a chance encounter with a desperate man on a crumbling cliff leads him into a sinister network - and back into the path of his old friend Reggie.”

Mick Herron returns to Slough House for the sixth in the Jackson Lamb spy series. I will certainly be joining the queue for this one!

“In Slough House memories are stirring, all of them bad. Catherine Standish is buying booze again, Louisa Guy is raking over the ashes of lost love, and new recruit Lech Wicinski, whose sins make him outcast even among the slow horses, is determined to discover who destroyed his career, even if he tears his life apart in the process.

“Meanwhile, in Regent’s Park, Diana Taverner’s tenure as First Desk is running into difficulties. If she’s going to make the Service fit for purpose, she might have to make deals with a familiar old devil. And with winter taking its grip Jackson Lamb would sooner be left brooding in peace, but even he can’t ignore the dried blood on his carpets. So when the man responsible breaks cover at last, Lamb sends the slow horses out to even the score.”

Diary of a Somebody, by Brian Bilston

If you have not heard of Brian Bilston, he is regarded as the ‘Banksy of poetry’. There are hints of Adrian Mole in this diary of a character who aspires to be a full time poet, but has to watch as his arch nemesis gets a book deal. A wonderful comic novel.

The Body Lies, by Jo Baker

Change of direction for the author of Richard & Judy pick Longbourn.

“When a young writer accepts a job at a university in the remote countryside, it’s meant to be a fresh start, away from the big city and the scene of a violent assault she’s desperate to forget. But despite the distractions of a new life and single motherhood, her nerves continue to jangle. To make matters worse, a vicious debate about violence against women inflames the tensions and mounting rivalries in her creative writing group.

“When a troubled student starts sending in chapters from his novel that blur the lines between fiction and reality, the professor recognises herself as the main character in his book - and he has written her a horrific fate. Will she be able to stop life imitating art before it’s too late?”

Vuong won the Forward Prize for Best First Collection and the T.S. Eliot Prize for Night Sky with Exit Wounds, so he has a fine pedigree. This is a stunningly original novel where the stories are told in the form of a letter from a son to his mother.

The Rapture, by Claire McGlasson

“Dilys is a devoted member of a terribly English cult: The Panacea Society, populated almost entirely by virtuous single ladies. When she strikes up a friendship with Grace, a new recruit, God finally seems to be smiling upon her. The friends become closer as they wait for the Lord to return to their very own Garden of Eden, and Dilys feels she has found the right path at last.

“But Dilys is wary of their leader’s zealotry and suspicious of those who would seem to influence her for their own ends. As her feelings for Grace bud and bloom, the Society around her begins to crumble. Faith is supplanted by doubt as both women come to question what is true and fear what is real.”

Grossman’s Life and Fate was judged by some critics to be the greatest Russian novel of the 20th century. Weighing in at 992 pages, this is its prequel.

“In April 1942, Hitler and Mussolini plan the huge offensive on the Eastern Front that will culminate in the greatest battle in human history. Hundreds of miles away, Pyotr Vavilov receives his call-up papers and spends a final night with his wife and children in the hut that is his home. As war approaches, the Shaposhnikov family gathers for a meal: despite her age, Alexandra will soon become a refugee; Tolya will enlist in the reserves; Vera, a nurse, will fall in love with a wounded pilot; and Viktor Shtrum will receive a letter from his doomed mother which will haunt him forever.

“The war will consume the lives of a huge cast of characters - lives which express Grossman’s grand themes of the nation and the individual, nature’s beauty and war’s cruelty, love and separation.”

After the End, by Clare Mackintosh

From the author of the hugely successful I Let You Go.

“Max and Pip are the strongest couple you know. Only now they’re facing the most important decision of their lives - and they don’t agree. As the consequences of an impossible choice threaten to devastate them both, nothing will ever be the same again. But anything can happen after the end.”

The Whisper Man, by Alex North

I’m told there is a major Hollywood film deal for this one.

“If you leave a door half-open, soon you’ll hear the whispers spoken.

“Still devastated after the loss of his wife, Tom Kennedy and his young son Jake move to the sleepy village of Featherbank, looking for a fresh start. But Featherbank has a dark past. 15 years ago a twisted serial killer abducted and murdered five young boys. Until he was finally caught, the killer was known as ‘The Whisper Man’.

“Of course, an old crime need not trouble Tom and Jake as they try to settle in to their new home. Except that now another boy has gone missing. And then Jake begins acting strangely. He says he hears a whispering at his window.”

Those People, by Louise Candlish

“Could you hate your neighbour enough to plot to kill him?

“Until Darren Booth moves in at number 1, Lowland Way, the neighbourhood is a suburban paradise. But soon after his arrival, disputes over issues like loud music and parking rights escalate all too quickly to public rows and threats of violence. Then, early one Saturday, a horrific crime shocks the street.

“As the police go house-to-house, the residents close ranks and everyone’s story is the same: Booth did it. But there’s a problem. The police don’t agree with them.”