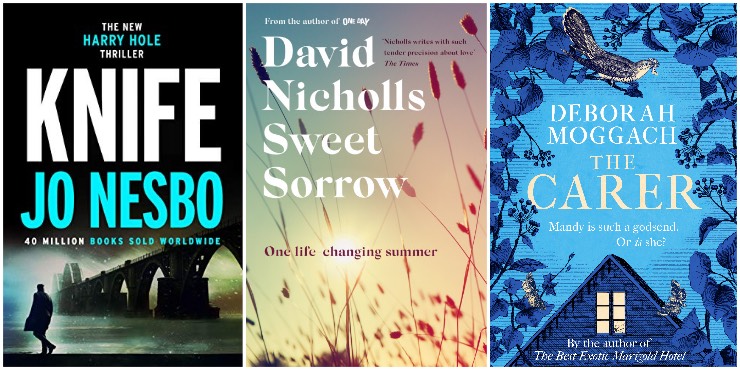 A new bestseller from the author of One Day, which is 10 years old this year.

“On one life-changing summer 16-year-old Charlie meets Fran. This is a hymn to the tragicomedy of ordinary lives, a celebration of the reviving power of friendship and that brief, blinding explosion of first love that perhaps can only be looked at directly once it has burned out.”

Twelfth in the ever popular Harry Hole series. Get your reservation in now!

“Following the dramatic conclusion of number one bestseller The Thirst, Knife sees Harry Hole waking up with a ferocious hangover, his hands and clothes covered in blood. Not only is Harry about to come face to face with an old, deadly foe, but with his darkest personal challenge yet.”

A novel about the gap between how we thought life would turn out and the reality. An enjoyable read.

“Hannah, Cate and Lissa are young, vibrant and inseparable. Living on the edge of a common in East London, their shared world is ablaze with art and activism, romance and revelry - and the promise of everything to come. They are electric. They are the best of friends.

“Ten years on, they are not where they hoped to be. Amidst flailing careers and faltering marriages, each hungers for what the others have. And each wrestles with the same question: what does it take to lead a meaningful life?

“This is a story of the highs and lows of friendship - how it can dip, dive and rise again. It is also about muddling through: as a mother, a daughter, a wife, a rebel. Most of all, it explores that liminal space between expectation and reality, the place - full of dreams, desires and pain - in which we all live our lives.”

The Carer, by Deborah Moggach

“James is getting on a bit and needs full-time help. So Phoebe and Robert, his middle-aged offspring, employ Mandy, who seems willing to take him off their hands.

“But as James regales his family with tales of Mandy’s virtues, their shopping trips, and the shared pleasure of their journeys to garden centres, Phoebe and Robert sense something is amiss. Is this really their father, the distant figure who never once turned up for a sports day, now happily chortling over cuckoo clocks and television soaps?

“Then something happens that throws everything into new relief, and Phoebe and Robert discover that life most definitely does not stop for the elderly. It just moves onto a very different plane - changing all the stories they thought they knew so well.”

A kind of Sliding Doors with parallel worlds. Lauren dies several times, waking up in a slightly different world each time. In each life a man called Peter Stanning disappears, and each time Lauren sets out to find him.

Pan’s Labyrinth: the labyrinth of the faun, by Cornelia Funke

An adaptation of Guillermo del Toro’s dark fantasy Pan’s Labyrinth. It stays faithful to the original story but also includes new material to give it another level.

“Ofelia has been sent to stay with her new stepfather, a ruthless captain of the Spanish army. For him, the dark and eerie forest in which they live is a cage, serving only to hide resistance fighters in the drawn-out and bloody civil war - those he has made it his aim to destroy.

“But with her mother bedridden, Ofelia is left unchecked and becomes enchanted by their magical home. Obsessed with fairytales, she is drawn deeper and deeper into a mythical world which is both cruel and kind, benign and deadly. For Ofelia, too, must endure violence if she is to complete the tasks that will win her place at the centre of the labyrinth: the palace of the Faun.”

Murder by the Minster, by Helen Cox

“It’s a normal day for Kitt Hartley at her job at the University of the Vale of York library, until DI Halloran arrives at her desk to tell her that her best friend, Evie Bowes, is under suspicion of murder. Evie’s ex-boyfriend Owen has been found dead - with a fountain pen stabbed through his heart - and all the evidence points to her. Kitt knows there is no way Evie could murder anyone - let alone Owen, who she adored.

“Horrified that the police could have got it so wrong, Kitt decides there’s only one thing to do: she’s going to investigate Owen’s murder herself. She’s read hundreds of mystery novels - how hard can it be? With the help of her assistant Grace, and the occasional hindrance of the library’s eccentric regulars, Kitt summons up all her investigative powers and gets to work. She soon discovers that down the quaint streets and snickelways of York lie darker doings than she’d ever dreamed.”

The Family Upstairs, by Lisa Jewell

“You thought they were just staying for the weekend. They looked harmless enough - with only two suitcases and a cat in a wicker box. But soon things turn very, very dark. It happens slowly, yet so extraordinarily quickly. Now you and your sister must find a way to survive.”

A Secret Life, by Christobel Kent

“A girls’ night out. A bad decision. A life, unravelling.

“When Georgie is persuaded to join two old friends for Ladies’ Night, she intends to have fun, to behave like the Georgie she was before marriage and motherhood changed her life. But one drink too many and Georgie’s not sure what happened the night before. Now she’s starting to wonder just what she’s invited in to her life.”

“December, 1939. Having solved the case of the Suffolk Vampire, Inspector Betty Church and her colleagues at Sackwater Police Station have settled back down to business. There’s the elderly Mr Fern who keeps losing his slippers, Sylvia Satin’s thirteenth birthday party to attend and the scintillating case of the missing bookmark to solve. Though peace and quiet are all well and good, Betty soon finds herself longing for some cold-blooded murder.

“When a bomb is dropped on a residential street, both peace and quiet are broken and it seems the war has finally reached Sackwater. But Betty cannot stop the Hun, however hard she tries. So when the body of one of the bomb victims is found stretched out like an angel on Sackwater’s beach, Betty concentrates on finding the enemy much closer to home.”

The Secret Hours, by Santa Montefiore

“Arethusa Clayton has always been formidable, used to getting her own way. On her death, she leaves unexpected instructions. Instead of being buried in America, on the wealthy East Coast where she and her late husband raised their two children, Arethusa has decreed that her ashes be scattered in a remote corner of Ireland, on the hills overlooking the sea.

“But who were her family in Ireland and where are they now? What was the real reason that she turned away from them? And who is the mysterious benefactor of a significant share of Arethusa’s estate?”

Priest of Lies, by Peter McLean

“When Tomas Piety and his Pious Men returned from the war, he just wanted to rebuild his crime empire and look after his people. But the sinister Queen’s Men had different ideas and whether he likes it or not, he’s now a spy as well.

“Now, half the city of Ellinburg lies in ashes and the webs of political intrigue are stretching out from the Queen’s capital to pull Tomas in. Dannsburg is calling. In Dannsburg the nobility fight with words, not blades, but the results are every bit as bloody. In this pit of beasts, Tomas must decide once and for all whether he is truly the people’s champion - or just a priest of lies. And as Tomas’ power grows, the nobility had better watch their backs.”