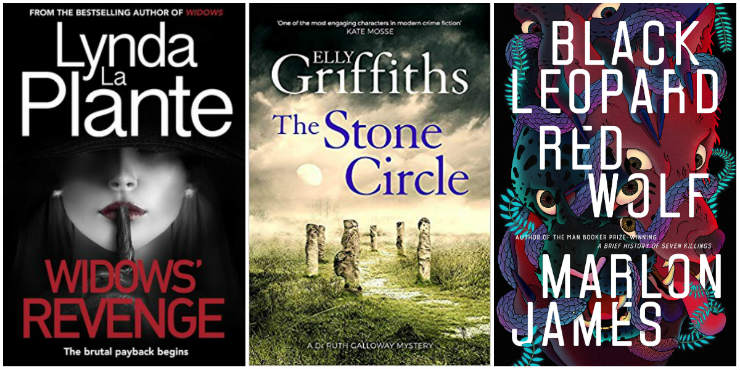 The Stone Circle, by Elly Griffiths

Dr Ruth Galloway returns for the 11th in the series. This one needs no introduction. All I can do is suggest you join the waiting list. We will buy lots of copies.

“DCI Nelson has been receiving threatening letters telling him to ‘go to the stone circle and rescue the innocent who is buried there’. He is shaken, not only because children are very much on his mind, with Michelle’s baby due to be born, but because although the letters are anonymous, they are somehow familiar. They read like the letters that first drew him into the case of The Crossing Places, and to Ruth. But the author of those letters is dead. Or are they?

“Meanwhile Ruth is working on a dig in the Saltmarsh - another henge, known by the archaeologists as the stone circle - trying not to think about the baby. Then bones are found on the site, and identified as those of Margaret Lacey, a twelve-year-old girl who disappeared thirty years ago. As the Margaret Lacey case progresses, more and more aspects of it begin to hark back to that first case of The Crossing Places.”

Late in the Day, by Tessa Hadley

The latest from recent Meet the Author interviewee Tessa Hadley. We’re already growing a waiting list for this one. If you haven’t read anything by Hadley, then you really should.

“Alexandr and Christine and Zachary and Lydia have been close friends since they first met in their twenties. Thirty years later Alex and Christine are spending a leisurely summer evening at home when they receive a call from a distraught Lydia. Zach is dead.

“In the wake of this profound loss, the three friends find themselves unmoored; all agree that Zach was the sanest and kindest of them all, the irreplaceable one they couldn’t afford to lose. Inconsolable, Lydia moves in with Alex and Christine.

“But instead of loss bringing them closer, the three of them find over the following months that it warps their relationships, as old entanglements and grievances rise from the past, and love and sorrow give way to anger and bitterness.”

If Only I Could Tell You, by Hannah Beckerman

“Audrey’s family has fallen apart. Her two grown-up daughters, Jess and Lily, are estranged, and her two teenage granddaughters have never been allowed to meet. A secret that echoes back thirty years has splintered the family in two, but is also the one thing keeping them connected.

” As tensions reach breaking point, the irrevocable choice that one of them made all those years ago is about to surface. After years of secrets and silence, how can one broken family find their way back to each other?”

If you like Jojo Moyes books then you will probably like this. Hannah Beckerman has written an absorbing tale of long buried family secrets with a major twist.

The Wych Elm, by Tana French

“‘For me it all goes back to that night, the dark corroded hinge between before and after, the slipped-in sheet of trick glass that tints everything on one side in its own murky colours and leaves everything on the other luminous and untouchable.’

“One night changes everything for Toby. He’s always led a charmed life - until a brutal attack leaves him damaged and traumatised, unsure even of the person he used to be. He seeks refuge at his family’s ancestral home, the Ivy House, filled with memories of wild-strawberry summers and teenage parties with his cousins.

“But not long after Toby’s arrival, a discovery is made: a skull, tucked neatly inside the old wych elm in the garden. As detectives begin to close in, Toby is forced to examine everything he thought he knew about his family, his past, and himself.”

My sources tell me you will need to put your life on hold to finish this psychologically complex story. It is a long read at 528 pages but a consuming one.

New title from the crime writing duo behind the hugely successful The Wife Between Us. A make-up artist takes up the offer of making some easy money by submitting to some psychological testing. She soon discovers that the mysterious Dr Shields has another agenda.

The Familiars, by Stacey Halls

Debut novel which takes the reader back to the Pendle Witch Trials of 1612.

“Fleetwood Shuttleworth is 17 years old, married, and pregnant for the fourth time. But as the mistress at Gawthorpe Hall, she still has no living child, and her husband Richard is anxious for an heir. When Fleetwood finds a letter she isn’t supposed to read from the doctor who delivered her third stillbirth, she is dealt the crushing blow that she will not survive another pregnancy.

“Then she crosses paths by chance with Alice Gray, a young midwife. Alice promises to help her give birth to a healthy baby, and to prove the physician wrong. As Alice is drawn into the witchcraft accusations that are sweeping the North-West, Fleetwood risks everything by trying to help her. But is there more to Alice than meets the eye?”

The Lost Man, by Jane Harper

The eagerly awaited new book from the bestselling author of The Dry and Force of Nature.

“Two brothers meet at the remote fence line separating their cattle farms under the relenting sun of the remote outback. In an isolated part of Western Australia, they are each other’s nearest neighbour, their homes three hours’ drive apart. They are at the stockman’s grave, a landmark so old that no one can remember who is buried there.

“But today, the scant shadow it casts was the last hope for their middle brother, Cameron, who lies dead at their feet. Something had been on Cam’s mind. Did he choose to walk to his death? Because if he didn’t, the isolation of the outback leaves few suspects.”

The long-awaited sequel to Widows, which was made into a blockbuster film last year.

“Against all the odds, Dolly Rawlins and her gangland widows managed the impossible: a heist their husbands had failed to pull off - at the cost of their lives. But though they may be in the money, they’re far from easy street. Shocked by her husband’s betrayal, Dolly discovers Harry Rawlins isn’t dead. He knows where the four women are and he wants them to pay.”

“Strangefields Farm has been notorious for its sinister history ever since artist Jackson Temples lured young women there to model for disturbing works of art. Some of those girls never left the house alive.

“Now, decades later, Strangefields is to be transformed into a holiday village, but the developer’s hopes of its dark history being forgotten are dashed when a skull is found on the site. And when a local florist is found murdered in an echo of Temples’ crimes, DI Wesley Peterson fears that a copy-cat killer is at large. Especially when another brutal murder in a nearby village appears to be linked. As Wesley’s friend, archaeologist Dr Neil Watson, uncovers the secrets of Strangefields’ grisly past, it seems that an ancient tale of the dead returning to torment the living might not be as fantastical as it seems.”

The first book from Marlon James since he won the Man Booker Prize with A Brief History of Seven Killings.

“Tracker is known far and wide for his skills as a hunter: ‘He has a nose,’ people say - as well as the eye of a wolf. Engaged to find a mysterious boy who has disappeared three years before, Tracker breaks his own rule of always working alone when he finds himself part of a rag-tag group that comes together to search for the boy.

“Full of striking characters with secrets of their own, including a shape-shifting man-animal known as Leopard, a witch and the giant-sized Ogo, this unlikely band follow the lost boy’s scent from one ancient city to another; into dense forests and across deep rivers, set upon by creatures intent on destroying them.

“As he struggles to survive, Tracker starts to wonder: Who, really, is this boy? Why has he been missing for so long? Why do so many people want to keep Tracker from finding him? And who is telling the truth, and who is lying?”

The Taking of Annie Thorne, by C. J. Tudor

The author of the bestselling The Chalk Man and former Meet the Author interviewee returns with her new novel. A man receives an anonymous e-mail from a sender who claims to know what happened to his sister Annie, who mysteriously disappeared, then re-appeared after 48 hours, without ever saying what had happened to her.