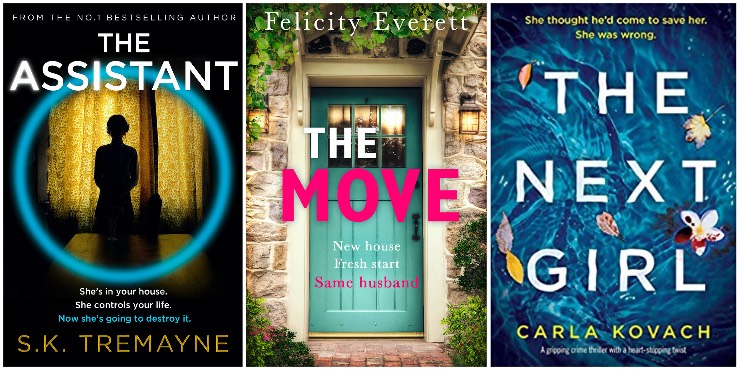 The Assistant, by S. K. Tremayne

New from the author of Richard and Judy pick The Ice Twins. Newly-divorced Jo moves into a friend’s luxury flat. It is managed by a virtual assistant called Electra. One night Electra utters the words “I know what you did.” How could Electra possibly know?

“Joan was someone else, until she’s just pitched up in Vegas. But now that she’s becoming Joan, she has a list: Buy a new dress (fitted, floral). Change her car. Dye her hair (dark). Curl it. Buy red lipstick. Buy cigarettes and a lighter, too - because as Joan, she is going to be a smoker. She’s not going to think about why she’s here, what she’s left behind. She is just moving forward, accomplishing her tasks one by one, becoming that new person. Joan.

“Maybe she’ll put the radio on. Sing along to the Ronettes. There are bomb tests in the desert outside this city, with its neon, new starts, gamblers and shows. Something to see. She’s certainly not thinking about Jack. Not any more. Her new life starts now.”

The Move, by Felicity Everett

“Karen is driving through a strange landscape into a new life. Always a city girl, now she is on her way to an idyllic country cottage, refurbished for her with impeccable taste by her husband Nick. They’re making a fresh start. But something is awry in the new house - it’s not just the fact that Karen and Nick are ill at ease in one another’s company - that their recent history is far from picture perfect, it’s the whole vibe.

“The landscape is breathtaking by day, eerie by night. If the countryside is supposed to be a place of peace, far away from curtain-twitchers, who is the person watching them from the hill? And who are their new neighbours? With Karen only recently emerging from a dark place in her life, can she find the trust in her husband Nick to let go of events that have followed them to their new house?”

Latest medical thriller from the man who invented the genre.

“When the body of twenty-nine-year-old social worker Gloria Montoya, seven weeks pregnant with her first child, shows up on Chief New York City Medical Examiner Laurie Montgomery’s autopsy table, she’s baffled to find no apparent causes of death. With no clues to go on, Laurie enlists the help of Dr Tricia Albanese, a forensic pathology resident with a background in genetic science, to help her trace the identity of the unborn baby’s father using DNA from the mother and child.

“But when Tricia is found dead in her apartment in a manner strikingly similar to Gloria’s death, Laurie realises she might have two linked homicides on her hands - and now it’s up to her, with the help of her husband, ME Jack Stapleton, to continue the tracking work Tricia had begun before a killer can strike again.”

All The Wrong Places, by Joy Fielding

“You always know who you’re meeting online - don’t you? Four women decide to explore online dating, downloading an app that promises they will swipe their way to love and happiness. But not everyone is who they seem online. Hidden behind a perfect smile and charming humour, one man appears to be the perfect date. But the night he has planned is unlike any other. The clock is ticking, and for one woman, this date might just be her last.”

Read our Meet the Author interview with Joy Fielding →

Just Watch Me, by Jeff Lindsay

From the author of the bestselling Dexter series.

“Riley Wolfe is a master thief, expert at disguise, and not averse to violence when it’s needed. It’s no accident, though, that Riley targets the wealthiest 0.1% and is willing to kill them when they’re in his way: he despises the degenerate and immoral rich and loves stealing their undeserved and unearned valuables.

“In this series launch, Riley aims for an extraordinary target in a heist that will make history. Riley will try to steal the Crown Jewels of Iran. Yes, these jewels are worth billions, but the true attraction for grabbing them comes down to one simple fact: it can’t be done. Stealing these jewels is absolutely impossible. The collection is guarded by space-age electronics and two teams of heavily armed mercenaries. No one could even think of getting past the airtight security and hope to get away alive, let alone with even a single diamond from the Imperial Collection.”

The Honjin Murders, by Seishi Yokomizo

If you are searching for something a bit different, this is the first Japanese murder mystery to feature amateur detective Kosuke Kindaichi, who went on to feature in 76 books in his hime country. This title is translated into English for the first time.

“In the winter of 1937, the village of Okamura is abuzz with excitement over the forthcoming wedding of a daughter of the grand Ichiyanagi family. But amid the gossip over the approaching festivities, there is also a worrying rumour - it seems a sinister masked man has been asking questions about the Ichiyanagis around the village.

“Then, on the night of the wedding, the Ichiniyagi family are woken by a terrible scream, followed by the sound of eerie music - death has come to Okamura, leaving no trace but a bloody samurai sword, thrust into the pristine snow outside the house. The murder seems impossible, but amateur detective Kosuke Kindaichi is determined to get to the bottom of it.”

The Next Girl, by Carla Kovach

“Deborah Jenkins pulls her coat around her for the short walk home in the pouring rain. But she never makes it home that night. And she is never seen again.

“Four years later, an abandoned baby girl is found wrapped in dirty rags on a doorstep. An anonymous phone call urges the police to run a DNA test on the baby. But nobody is prepared for the results. The newborn belongs to Deborah. She’s still alive.”