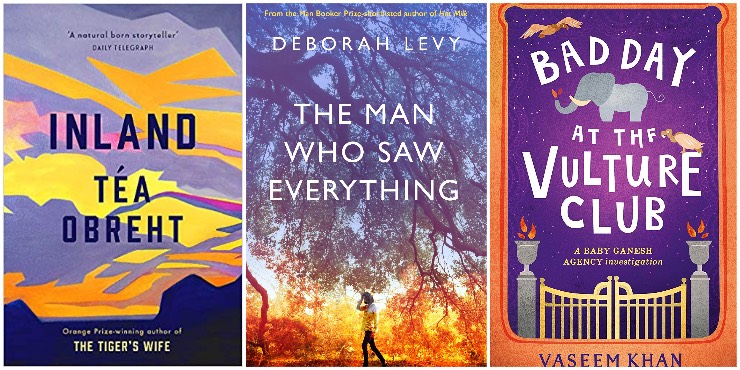 How the Dead Speak, by Val McDermid

The new Tony Hill and Carol Jordan thriller is sure to be huge, so get your reservation in now.

“‘We are all creatures of habit. Even murderers…’

“When human remains are discovered in the grounds of an old convent, it quickly becomes clear that someone has been using the site as their personal burial ground. But with the convent abandoned long ago and the remains dating back many years, could this be the work of more than one obsessive killer?

“It’s an investigation that throws up more questions as the evidence mounts, and after their last case ended catastrophically, Tony Hill and Carol Jordan can only watch from afar. As they deal with the consequences of previous actions, someone with a terrifying routine is biding their time - and both Tony and Carol find themselves closer to the edge than they have ever been before…”

The Turn of the Key, by Ruth Ware

Haunted house thriller from the 2016 Meet the Author interviewee who wrote In a Dark, Dark Wood.

“When she stumbles across the advert, she’s looking for something else completely. But it seems like too good an opportunity to miss: a live-in nanny position, with a staggeringly generous salary. And when Rowan arrives at Heatherbrae House, she is smitten by the luxurious ‘smart’ home fitted out with all modern conveniences, by the beautiful Scottish Highlands, and by this picture-perfect family.

“What she doesn’t know is that she’s stepping into a nightmare - one that will end with a child dead and her in a cell awaiting trial for murder. She knows she’s made mistakes. But, she maintains, she’s not guilty - at least not of murder. Which means someone else is.”

“Platform Seven at 4am: Peterborough Railway Station is deserted. The man crossing the covered walkway on this freezing November morning is confident he’s alone. As he sits on the metal bench at the far end of the platform it is clear his choice is strategic - he’s as far away from the night staff as he can get.

“What the man doesn’t realise is that he has company. Lisa Evans knows what he has decided. She knows what he is about to do as she tries and fails to stop him walking to the platform edge.

“Two deaths on Platform Seven. Two fatalities in eighteen months - surely they’re connected? No one is more desperate to understand what connects them than Lisa Evans herself. After all, she was the first of the two to die.”

The Nickel Boys, by Colson Whitehead

Much-anticipated follow up to the Pulitzer Prize and National Book Award winning bestseller The Underground Railroad, in which Whitehead dramatises another strand of United States history, this time through the story of two boys sentenced to a stretch in a hellish reform school in Jim Crow era Florida.

Bad Day at the Vulture Club, by Vaseem Khan

“The Parsees are among the oldest, most secretive and most influential communities in the city: respected, envied and sometimes feared. When prominent industrialist Cyrus Zorabian is murdered on holy ground, his body dumped inside a Tower of Silence - where the Parsee dead are consumed by vultures - the police dismiss it as a random killing. But his daughter is unconvinced.

“Chopra, uneasy at entering this world of power and privilege, is soon plagued by doubts about the case. But murder is murder. And in Mumbai, wealth and corruption go in hand in hand, inextricably linking the lives of both high and low.”

If you have not read anything by Vaseem Khan, why not? His books are entertaining and witty and bring the sights and sounds of India to life. This is a series that is getting better and better.

The long-awaited new novel from the author of the Orange prize winning The Tiger’s Wife.

“Nora is an unflinching frontierswoman awaiting the return of the men in her life - her husband who has gone in search of water for the parched household, and her elder sons who have vanished after an explosive argument. Nora is biding her time with her youngest son, who is convinced that a mysterious beast is stalking the land around their home, and her husband’s 17-year-old cousin, who communes with spirits.

“Lurie is a former outlaw and a man haunted by ghosts. He sees lost souls who want something from him, and he finds reprieve from their longing in an unexpected relationship that inspires a momentous expedition across the West.”

“Renowned surgeon Michael Trenchard locks his office door and prepares for a relaxing evening - Wagner on the sound system, a fine Scotch to hand. A knock at the door heralds the arrival of the person he most wants to see - the person who excites him more than anyone else. But what follows will turn his dreams into a living nightmare - for he will be discovered later that night in a locked-in coma, the victim of an auto-erotic asphyxiation.

“Can this really be an accident? It is left to Dr Kash Devan, Trenchard’s young protégé, to uncover the truth. What he discovers is chilling: in his ruthless pursuit of wealth and success Trenchard has left a trail of wrecked lives behind him. Which of his victims hated him so much they wanted not only his life, but also his reputation ruined?”

The Art of Dying, by Ambrose Parry

Chris Brookmyre and his wife Dr Marisa Haetzman follow the hugely popular The Way of All Flesh under their literary pseudonym.

“Edinburgh, 1850. Despite being at the forefront of modern medicine, hordes of patients are dying all across the city, with doctors finding their remedies powerless. But it is not just the deaths that dismay the esteemed Dr James Simpson - a whispering campaign seeks to blame him for the death of a patient in suspicious circumstances.

“Simpson’s protégé Will Raven and former housemaid Sarah Fisher are determined to clear their patron’s name. But with Raven battling against the dark side of his own nature, and Sarah endeavouring to expand her own medical knowledge beyond what society deems acceptable for a woman, the pair struggle to understand the cause of the deaths.”

“A not-so-evil queen is terrified of her monstrous stepdaughter and determined to repel this creature and save her kingdom from a world where happy endings aren’t so happily ever after.”

How It Was, by Janet Ellis

Former TV presenter Janet Ellis returns with her new novel, which charts the consequences of an affair that a young mother had with a married man. Interestingly, it is told from the perspective of the mother and her children.

“In a 1970s village in rural Kent, lives go on in an unremarkable way. But Marion Deacon, struggling with being a wife and mother, is about to set events in motion that she cannot control in a story of love, motherhood, betrayal, and long-hidden secrets - because everyone has at least one secret.”

The Need, by Helen Phillips

Original, genre-bending tale that invites us to speculate on the nature of reality, as well as being a very readable thriller.

“Ella is nearing thirty, and not yet living the life she imagined. Her artistic ambitions as a student have given way to an unintended career as a care worker. One spring, Bryn - a retired carpenter - hires her to help him care for Jill, his wife of many years. A car accident caused a brain injury that has left Jill verbally diminished; she moves about the house like a ghost of her former self.

“As Ella is drawn ever deeper into the couple’s household, she is profoundly moved by the tenderness Bryn shows toward the wife he still fiercely loves. Ella is startled by the yearning this awakens in her, one that complicates her feelings for her girlfriend, Alix, and causes her to look at relationships of all kinds - between partners, between employer and employee, and above all between men and women - in new ways.”

The Man Who Saw Everything, by Deborah Levy

“In 1989 Saul Adler (a narcissistic, young historian) is hit by a car on the Abbey Road. He is apparently fine; he gets up and goes to see his art student girlfriend, Jennifer Moreau. They have sex then break up, but not before she has photographed Saul crossing the same Abbey Road.

“Saul leaves to study in communist East Berlin, two months before the Wall comes down. There he will encounter - significantly - both his assigned translator and his translator’s sister, who swears she has seen a jaguar prowling the city. He will fall in love and brood upon his difficult, authoritarian father. And he will befriend a hippy, Rainer, who may or may not be a Stasi agent, but will certainly return to haunt him in middle age.

“In 2016, Saul Adler is hit by a car on the Abbey Road. He is rushed to hospital, where he spends the following days slipping in and out of consciousness, and in and out of memories of the past.”