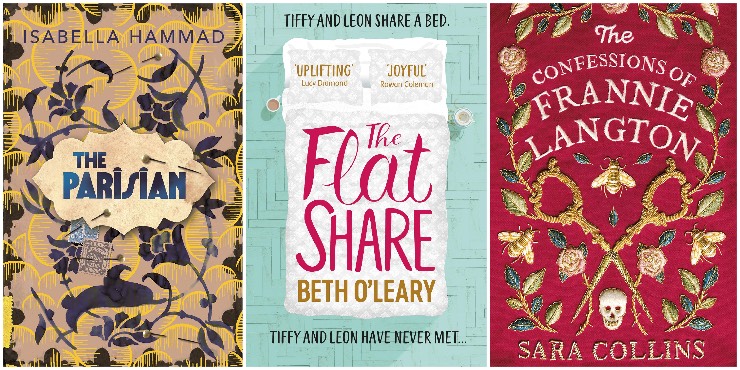 A new book by Ian McEwan is always a literary event and is our lead title this month.

“Britain has lost the Falklands war, Margaret Thatcher battles Tony Benn for power and Alan Turing achieves a breakthrough in artificial intelligence. In a world not quite like this one, two lovers will be tested beyond their understanding.

“Machines Like Me occurs in an alternative 1980s London. Charlie, drifting through life and dodging full-time employment, is in love with Miranda, a bright student who lives with a terrible secret. When Charlie comes into money, he buys Adam, one of the first batch of synthetic humans. With Miranda’s assistance, he co-designs Adam’s personality. This near-perfect human is beautiful, strong and clever - a love triangle soon forms. These three beings will confront a profound moral dilemma.”

Latest thriller from the author of Thirteen. This one has the mother of all twists.

“Who is JT LeBeau?

“A bestselling crime writer, whose words have gripped the world. The only mystery greater than his stories is his true identity. One woman thinks she’s found him - her husband has millions in the bank and a letter for the enigmatic author. But the truth is far more twisted.”

The Language of Birds, by Jill Dawson

The author of The Crime Writer returns with a new novel which draws on the Lord Lucan murder case of 1974. Jill is one of the authors at Slaughter in Southwold this year.

“In the summer of 1974, Mandy River arrives in London to make a fresh start and begins working as nanny to the children of one Lady Morven. She quickly finds herself in the midst of a bitter custody battle and the house under siege: Lord Morven is having his wife watched. According to Lady Morven, her estranged husband also has a violent streak, yet she doesn’t seem the most reliable witness. Should Mandy believe her? As Mandy tries to shield her young charges from harm, her friend Rosemary watches from the wings - an odd girl with her own painful past and a rare gift. This time, though, she misreads the signs.”

The Parisian, by Isabella Hammad

Literary historical debut novel that comes with a glowing recommendation from Zadie Smith.

“As the First World War shatters families, destroys friendships and kills lovers, a young Palestinian dreamer sets out to find himself. Midhat Kamal picks his way across a fractured world, from the shifting politics of the Middle East to the dinner tables of Montpellier and a newly tumultuous Paris. He discovers that everything is fragile: love turns to loss, friends become enemies and everyone is looking for a place to belong.”

Things in Jars, by Jess Kidd

Latest book from the original and distinctive author of Himself and The Hoarder and previous Meet the Author interviewee.

“London, 1863. Bridie Devine, the finest female detective of her age, is taking on her toughest case yet. Reeling from her last job and with her reputation in tatters, a remarkable puzzle has come her way. Christabel Berwick has been kidnapped. But Christabel is no ordinary child. She is not supposed to exist.

“As Bridie fights to recover the stolen child she enters a world of fanatical anatomists, crooked surgeons and mercenary showmen. Anomalies are in fashion, curiosities are the thing, and fortunes are won and lost in the name of entertainment. The public love a spectacle and Christabel may well prove the most remarkable spectacle London has ever seen.”

A gothic thriller with local interest from the author of Dark Matter and Thin Air.

“Something has been let loose…”

“In Edwardian Suffolk, a manor house stands alone in a lost corner of the Fens: a glinting wilderness of water whose whispering reeds guard ancient secrets. Maud is a lonely child growing up without a mother, ruled by her repressive father. When he finds a painted medieval devil in a graveyard, unhallowed forces are awakened.

“Maud’s battle has begun. She must survive a world haunted by witchcraft, the age-old legends of her beloved fen – and the even more nightmarish demons of her father’s past.

“Spanning five centuries, Wakenhyrst is a darkly gothic thriller about murderous obsession and one girl’s longing to fly free.”

More Suffolk interest in the latest book from the author of He Said/She Said.

“Marianne was seventeen when she fled her home, her family, her boyfriend Jesse and the body they buried. Now, forced to return, she can feel the past closing around her. And Jesse, who never forgave her for leaving, is finally threatening to expose the truth.

“Marianne will do anything to protect the life she’s built; the husband and daughter who must never know. Even if it means turning to her worst enemy. But Marianne may not know the whole story - and she isn’t the only one with secrets they’d kill to keep.”

The posthumous last in the Bernie Gunther series from Philip Kerr, who died last year.

“Berlin, 1928, the dying days of the Weimar Republic shortly before Hitler and the Nazis came to power. It was a period of decadence and excess as Berliners - after the terrible slaughter of WWI and the hardships that followed - are enjoying their own version of Babylon.

“Bernie is a young detective working in Vice when he gets a summons from Bernard Weiss, Chief of Berlin’s Criminal Police. He invites Bernie to join KIA - Criminal Inspection A - the supervisory body for all homicide investigation in Kripo. Bernie’s first task is to investigate the Silesian Station killings - four prostitutes murdered in as many weeks. All of them have been hit over the head with a hammer and then scalped with a sharp knife. Bernie hardly has time to acquaint himself with the case files before another prostitute is murdered.”

The Flatshare, by Beth O’Leary

Unusually for a romcom, we are already getting requests for this. It looks like it will be a big title.

“Tiffy Moore needs a cheap flat, and fast. Leon Twomey works nights and needs cash. Their friends think they’re crazy, but it’s the perfect solution: Leon occupies the one-bed flat while Tiffy’s at work in the day, and she has the run of the place the rest of the time.

“But with obsessive ex-boyfriends, demanding clients at work, wrongly-imprisoned brothers and, of course, the fact that they still haven’t met yet, they’re about to discover that if you want the perfect home you need to throw the rulebook out the window.”

The Confessions of Frannie Langton, by Sara Collins

This book was at the centre of a frenzied publishers’ bidding war and it looks like it will do well.

“1826, and all of London is in a frenzy. Crowds gather at the gates of the Old Bailey to watch as Frannie Langton, maid to Mr and Mrs Benham, goes on trial for their murder. The testimonies against her are damning - slave, whore, seductress. And they may be the truth.

“But they are not the whole truth. For the first time Frannie must tell her story. It begins with a girl learning to read on a plantation in Jamaica, and it ends in a grand house in London, where a beautiful woman waits to be freed. But through her fevered confessions, one burning question haunts Frannie Langton: could she have murdered the only person she ever loved?”