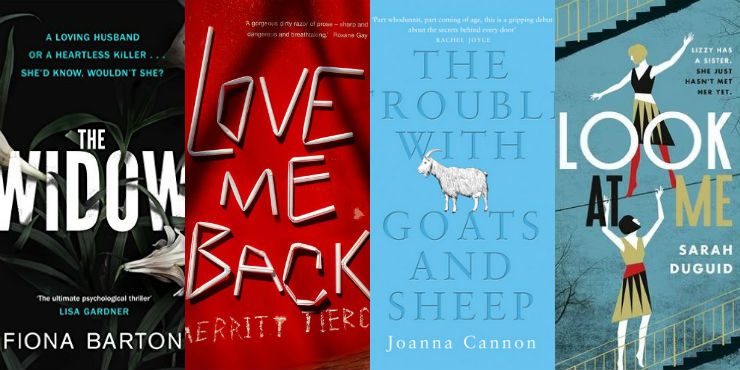 The widow by Fiona Barton

Jean Taylor’s life was blissfully ordinary. Nice house, nice husband. Glen was all she’d ever wanted: her Prince Charming. Until he became that man accused, that monster on the front page. Jean was married to a man everyone thought capable of unimaginable evil. But now Glen is dead and she’s alone for the first time, free to tell her story on her own terms. Jean Taylor is going to tell us what she knows. Bantam Press, an imprint of Transworld are hoping this will be its successor to The girl on the train.

Love me back by Merritt Tierce

Marie is a waitress at an upscale Dallas steakhouse, attuned to the appetites of her patrons and gifted at hiding her private struggle as a young single mother behind an easy smile and a crisp white apron. It’s a world of long hours and late nights, and Marie often gives in to self-destructive impulses, losing herself in a tangle of bodies and urgent highs as her desire for obliteration competes with a stubborn will to survive. Shortlisted for the 2015 PEN Literary award for debut fiction.

The trouble with goats and sheep by Joanna Cannon

England, 1976. Mrs Creasy is missing and the avenue is alive with whispers. As the summer shimmers endlessly on, ten year olds Grace and Tilly decide to take matters into their own hands. And as the cul-de-sac starts giving up its secrets, the amateur detectives will find much more than they imagined. Warm, funny and very British, this looks like a future book group favourite.

Look at me by Sarah Duguid

Headline know a thing or two about publishing fiction. This is their big debut for 2016 — author Sarah Duguid has already been signed up for future titles. Look at Me tells the story of a young woman dealing with her mother’s suicide and the secrets that come to light afterwards.