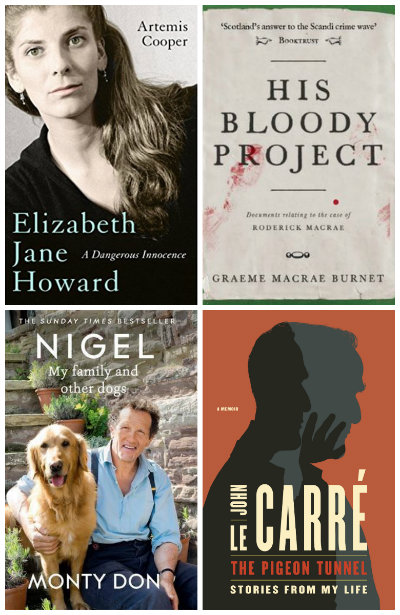 Although this list features some bestsellers, rather than being purely the most popular titles, these books have been chosen for their particular significance to the Suffolk Libraries stock unit over the past 12 months.

We always knew this would be a big title in Suffolk even when it appeared on our pre-publication lists three months in advance. Elizabeth Jane Howard was a much loved writer and was in the Friends group at Bungay Library. Artemis Cooper interviewed Howard on several occasions and has produced a fascinating book. With the local connections it was only natural that Artemis Cooper should visit Bungay Library to talk about her new book, which she did in September.

Graeme Macrae Burnet - His Bloody Project: documents relating to the case of Roderick Macrae: a novel

The Man Booker Award is always an interesting time for us. The longlist is announced and we make sure we have enough copies but we try not to buy too many in case they do not win. This year Graeme Macrae Burnet’s book was the popular choice of Suffolk readers, if not the official jury. As it was from a small Scottish publisher with a short print run it immediately went out of print as soon as everyone wanted it.

The idea of the book is an original one: the reader knows that there’s been a murder and who’s responsible, so the interest lies in the why and an exploration of the ‘crime’ from different perspectives. This is a book that plays with your mind. It looks like a non-fiction book but it is a novel. A tip if you are reading it, do not skip the foreword. I would file this one under ‘a great read’.

The first thing to say about this is it is a play. From a library perspective this created a few problems. Do you file it on the non-fiction shelf with Pinter et al or put it on the fiction shelves where people will find it? In the end we left it to local libraries to make their own decision, so I would advise checking the catalogue if you want to find this one!

Would the play be as popular as the books? The answer was probably ‘no’, but it is different. We return to the wizarding world 19 years after the Battle of Hogwarts. Some HP fans have been disappointed, but to be fair to the writers it was written to be a West End show, complete with stage directions. Harry, Ron, Hermione, Ginny and Draco Malfoy all feature but they are now middle-aged men and women with children of their own and jobs. One of my colleagues took this home and read it in one sitting but other reviews I have read have been mixed. Why not give it a try and judge for yourself?

Chris Packham - Fingers in the Sparkle Jar: lessons in life and death

TV personality Chris Packham (BBC Springwatch) delivers a brutally honest memoir which reveals how the mind of a person with Asperger’s works. It is often written in the third person as an outsider and is not always an easy read, but is definitely a rewarding one. Written in his usual exquisite prose, with breath-taking descriptions of the creatures, birds and woodlands, as well as pin-sharp details of the characters that he encounters, it is difficult to put down. If you want fluffy animals and a standard autobiographical tale you had better look elsewhere. This is in a whole different league and all the better for it.

Paula Hawkins - The Girl On The Train

This book was written last year but the reason I have included it is that it has stayed at the top of the bestseller lists throughout 2016, fighting off all comers. When we bought this book for library stock we had to keep buying more to keep up with demand.

For those who have been living in a cave for the last year the story is as follows: Rachel takes the train to work every day. It stops at the same place and she has a chance to gaze into the life of a ‘perfect’ young couple who she calls Jess and Jason and their perfect relationship. Then, one day, everything changes…

This is a top notch psychological thriller which will have you hooked. Interestingly there is a similarly titled self-published book in our collection which has done brisk business as people have put reservations on the wrong title. We were exceptionally lucky to get Paula Hawkins for our Meet the Author slot and she gave some interesting insights into how the book was written.

It wouldn’t be a proper list without including Suffolk Libraries’ most popular author. Every year Lee Child tops our list for most issued books and e-books. Any new book featuring Jack Reacher is eagerly seized on by his Suffolk fan base. We even have a special arrangement with our book supplier to get his new titles on screen as quickly as possible so we can get the reservations against the new book and assess demand. As I write this we have around 300 reservations for his newest title. One of the best moments of the year for me was when an e-mail from his publicist dropped into my e-mail box to tell me he would do our Meet the Author slot.

Monty Don - Nigel: my family and other dogs

Every year there is a surprise hit title. Nigel, Monty Don’s faithful golden retriever, fills that slot this year. Nigel is such a celebrity that he gets fan mail and has his own social media accounts with more than 22,000 Twitter followers! Unfortunately Nigel is not so hot on writing so Monty does that for him, telling a story of his dogs and how important dogs have been in his life. I’m sure this will be in a few Christmas stockings this year.

In 2016 The Night Manager became must-watch Sunday night TV. It also led a lot of people to start re-discovering John le Carre’s books. Now finally we hear from the man himself. The Pigeon Tunnel is more a series of autobiographical reminiscences than a biography, but it is a hugely enjoyable journey through his life - a life that has included fascinating meetings with everyone from Yasser Arafat to Alec Guinness (who brought the author’s George Smiley to life in a memorable TV adaptation), scientist Andrei Sakharov, film directors Fritz Lang, Stanley Kubrick, Richard Burton and many more.

An excellent read for the fan or non-fan. Springsteen offers an honest appraisal of his life, sharing his experiences of depression and the impact of having a parent with a mental health issue. This has a ring of authenticity of it coming from the man himself. If you only read one music biography this year, choose this one.

The 2016 Man Booker Prize winner. This is one for future book groups to argue about. If you are a fan it is a brilliant satire on race relations that tells the story of ‘Bon Bon’, brought up by a very strict father who uses him in his own racially motivated psychological studies. Bon Bon’s father believes that he will one day write a book about his studies and it will secure the family’s future. Before this can happen, he is gunned down in a drive-by shooting. Then the town where they live, Dickens, is removed from the map so that California is spared any further ‘embarrassment’. Bon Bon makes plans to right these wrongs and does it in the most satirical way possible by bringing back racial segregation to the town in schools and by reinstating slavery. This leads him to court, where the novel begins, as he is charged with having a slave.

I have heard varied reports of this one. It is a brilliant idea but it is hard to sustain for a whole book and the rambling style is not to everyone’s taste. Only time will tell as to whether this becomes a classic or a footnote in Booker Prize history.