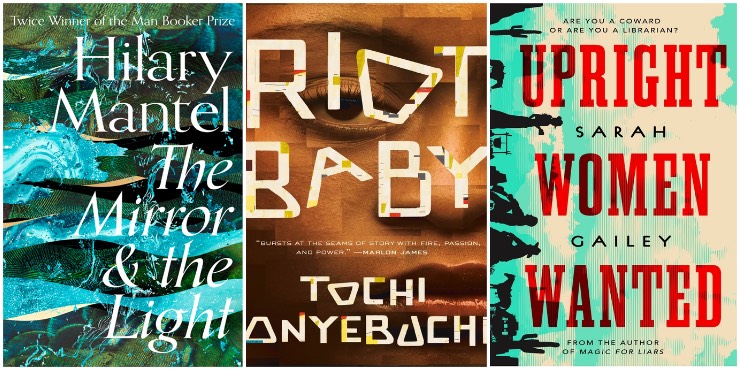 We’re always adding great titles to our eLibrary. We’ve listed some of our favourite new eBooks on OverDrive for March to help you choose your next digital read.

“That girl’s got more wrong notions than a barn owl’s got mean looks.”

“Esther is a stowaway. She’s hidden herself away in the Librarian’s book wagon in an attempt to escape the marriage her father has arranged for her — a marriage to the man who was previously engaged to her best friend. Her best friend who she was in love with. Her best friend who was just executed for possession of resistance propaganda.

“The future American Southwest is full of bandits, fascists, and queer librarian spies on horseback trying to do the right thing.”

“Ella has a Thing. She sees a classmate grow up to become a caring nurse. A neighbour’s son murdered in a drive-by shooting. Things that haven’t happened yet.

“Kev, born while Los Angeles burned around them, wants to protect his sister from a power that could destroy her. But when Kev is incarcerated, Ella must decide what it means to watch her brother suffer while holding the ability wreck cities in her hands.

“Rooted in the hope that can live in anger, Riot Baby</cite? is as much an intimate family story as a global dystopian narrative. It burns fearlessly toward revolution and has quietly devastating things to say about love, fury, and the black American experience.

“Ella and Kev are both shockingly human and immeasurably powerful. Their childhoods are defined and destroyed by racism. Their futures might alter the world.”

The Mirror and the Light, by Hilary Mantel

“‘If you cannot speak truth at a beheading, when can you speak it?’

“England, May 1536. Anne Boleyn is dead, decapitated in the space of a heartbeat by a hired French executioner. As her remains are bundled into oblivion, Thomas Cromwell breakfasts with the victors. The blacksmith’s son from Putney emerges from the spring’s bloodbath to continue his climb to power and wealth, while his formidable master, Henry VIII, settles to short-lived happiness with his third queen, before Jane dies giving birth to the male heir he most craves.

“Cromwell is a man with only his wits to rely on; he has no great family to back him, no private army. Despite rebellion at home, traitors plotting abroad and the threat of invasion testing Henry’s regime to breaking point, Cromwell’s robust imagination sees a new country in the mirror of the future. But can a nation, or a person, shed the past like a skin?”

“Jenny is unloved, unemployable and emotionally unfiltered. Her long-suffering friends seem sick of her and whilst her social media portrays her life as a bed of roses, it is more of a dying succulent. Could things get any worse? Her mother is on her doorstep with a suitcase, and Jenny is about to find out…”

The Spitfire Sisters, by Margaret Dickinson

“It is the 1930s and the Maitland family have spent the years following the Great War struggling to come to terms with its catastrophic aftermath, and their hopes now lie with the next generation. Their Lincolnshire village of Doddington suffered terrible loss and it has taken great courage for the bereaved families to rebuild their lives without their loved ones.

“When war is declared again, it is Daisy Maitland and her peers who must now take up the fight for freedom. Feisty and a daredevil like her beloved Aunt Pips, who spent World War One on the front line serving with a flying ambulance corps, Daisy had persuaded a family friend to teach her to fly as a young woman. Now her country is at war, she is determined to put her skills to good use, enlisting in the Air Transport Auxiliary. There she forges new friendships – but she never forgets her childhood friend and cousin, Luke, who has joined the RAF as a fighter pilot.

“As war rages in the skies and on the ground, Daisy, her friends and her family – at home and across the Channel – will find their bravery and strength tested to the very limits in their determination to save their country. And they have learned one of the most valuable lessons of all: true love will find a way.”

Such a Fun Age, by Kiley Reid

“When Emira is apprehended at a supermarket for ‘kidnapping’ the white child she’s actually babysitting, it sets off an explosive chain of events. Her employer Alix, a feminist blogger with the best of intentions, resolves to make things right. But Emira herself is aimless, broke and wary of Alix’s desire to help.

“When a surprising connection emerges between the two women, it sends them on a crash course that will upend everything they think they know – about themselves, each other, and the messy dynamics of privilege.”