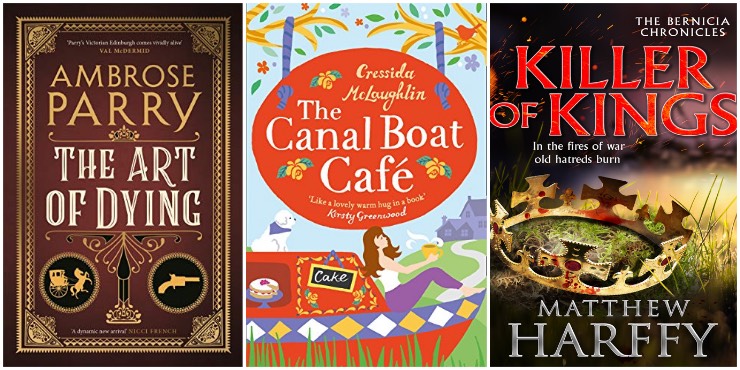 We’re always adding great titles to our eLibrary. We’ve listed some of our favourite new eBooks on OverDrive for September to help you choose your next digital read.

The Art of Dying, by Ambrose Parry

“Edinburgh, 1850. Despite being at the forefront of modern medicine, hordes of patients are dying all across the city, with doctors finding their remedies powerless. But it is not just the deaths that dismay the esteemed Dr James Simpson - a whispering campaign seeks to blame him for the death of a patient in suspicious circumstances.

“Simpson’s protégé Will Raven and former housemaid Sarah Fisher are determined to clear their patron’s name. But with Raven battling against the dark side of his own nature, and Sarah endeavouring to expand her own medical knowledge beyond what society deems acceptable for a woman, the pair struggle to understand the cause of the deaths.”

“Thea’s loathsome stepbrother is trying to trick her out of her inheritance of her parents’ beautiful house in the seaside town of Brighton by means of a Will which Thea believes to be forged. He gives her three months in which to leave. Afterwards she will face destitution.

“Anna is pregnant and grieving, her explorer fiancé lost at sea. Her violent father drives her from the family home in the back streets of London’s Bermondsey and her fiancé’s upper-class relatives cruelly reject her.

“Daisy is in search of independence, running from a man she doesn’t want to marry.

“Together the three girls set up Thea’s home as a guest house and embark on a mission to outwit her stepbrother by proving his fraud. In a race against time, nothing will turn out to be quite as it seems.”

I Spy, by Claire Kendal

“Someone is watching your every move…

“Holly Lawrence always wanted to be a spy, but the experience proved more dangerous than anything she imagined. Now, Holly lives in hiding under an assumed name. She avoids relationships and trusts no one. But Holly’s new life begins to unravel when she encounters a young mother and her two-year-old child - a child who reminds her of a past she has tried hard to forget. This time, someone is spying on her, and Holly will need to decide how far she is willing to go to survive.”

“Summer Freeman returns to the waterside village of Willowbeck to rescue the Canal Boat Café, her late mother’s picturesque narrowboat, which has run into choppy waters. A family friend, Valerie, has been trying to keep things afloat, but the coffee machine is jammed, the cake offerings are paltry, and not all of the locals want to see the café succeed.

“Help comes from the boat next door, in the shape of handsome wildlife photographer Mason and his naughty Border Terrier, who are showing more than a passing interest in Summer and her adorable Bichon Frise, Latte. But is Mason being honest about himself? Or does he have something to hide?

“As her life and the community of Willowbeck begin to entwine, Summer finds herself setting sail on a new adventure. Will the anchor of a steady life on land be too strong, or can Summer learn to cut loose and embrace life afloat?”

The Guardian of Lies, by Kate Furnivall

“1953, the South of France. The fragile peace between the West and Soviet Russia hangs on a knife edge. And one family has been torn apart by secrets and conflicting allegiances.

“Eloïse Caussade is a courageous young Frenchwoman, raised on a bull farm near Arles in the Camargue. She idolises her older brother, André, and when he leaves to become an Intelligence Officer working for the CIA in Paris to help protect France, she soon follows him. Having exchanged the strict confines of her father’s farm for a life of freedom in Paris, her world comes alive.

“But everything changes when André is injured - a direct result of Eloise’s actions. Unable to work, André returns to his father’s farm, but Eloïse’s sense of guilt and responsibility for his injuries sets her on the trail of the person who attempted to kill him.

“Eloïse finds her hometown in a state of unrest and conflict. Those who are angry at the construction of the American airbase nearby, with its lethal nuclear armaments, confront those who support it, and anger flares into violence, stirred up by Soviet agents.

“Throughout all this unrest, Eloïse is still relentlessly hunting down the man who betrayed her brother and his country, and she is learning to look at those she loves and at herself with different eyes. She no longer knows who she can trust. Who is working for Soviet Intelligence and who is not? And what side do her own family lie on?”

Killer of Kings, by Matthew Harffy

“Beobrand has land, men and riches. He should be content. And yet he cannot find peace until his enemies are food for the ravens. But before Beobrand can embark on his bloodfeud, King Oswald orders him southward, to escort holy men bearing sacred relics.

“When Penda of Mercia marches a warhost into the southern kingdoms, Beobrand and his men are thrown into the midst of the conflict. Beobrand soon finds himself fighting for his life and his honour.

“In the chaos that grips the south, dark secrets are exposed, bringing into question much that Beobrand had believed true. Can he unearth the answers and exact the vengeance he craves? Or will the blood-price prove too high, even for a warrior of his battle-fame and skill?”

The Big Five-O, by Jane Wenham-Jones

“They’re planning a party the seaside town of Broadstairs will never forget, but these four 49 year olds have far more on their minds than canapés and balloons for their half-century…

“Empty-nester Charlotte’s in a lather over what her husband might be up to. Single mother Roz lives in fear that her teenage daughter will discover how she pays the bills. Tough businesswoman Fay crows about her no-strings toy boy but hides the real story behind her divorce. Singleton Sherie’s cat is the only male in her life who ever stays around. Or is he?

“They’re all keeping secrets but as the big birthday looms, the beans are about to spill. As the shocks come out, one of them is going to need her friends more than ever…”

The Last Letter from Juliet, by Melanie Hudson

“A daring WWII pilot who grew up among the clouds, Juliet Caron’s life was one of courage, adventure – and a love torn apart by war. Every nook of her Cornish cottage is alive with memories just waiting to be discovered.

“Katherine Henderson has escaped to Cornwall for Christmas but she soon finds there is more to her holiday cottage than meets the eye. And on the eve of Juliet’s 100th birthday, Katherine is enlisted to make an old lady’s final Christmas wish come true…”

In the Heart of the Garden, by Leah Fleming

“Iris Bagshott strolls down the paths of her ancient garden, close to Lichfield in the heart of England, wondering if it is time to sell her house and land for development. She is unaware that around every corner myriad family secrets from the past unfold.

“From a Saxon clearing to a monastery, Tudor dwelling to the present day, this sacred plot has nurtured her ancestors. Generations of Bagshott women have found refuge and solace tending it through years of plague, civil war and beyond. This is their story.”

“What happens when the past comes back to kill you?

“When DCI Anna Tate is called to the gruesome discovery of a dead woman found on Barnes Common, she is plunged into a high‐profile investigation involving a prominent MP. London is baying for blood – but is there more to Holly’s death than at first meets the eye?

“Meanwhile, the hunt is on for Anna’s missing daughter Chloe, who vanished ten years ago when her ex‐husband kidnapped her. The case has been cold for what feels like forever – but a phone call brings a brand new lead…

“Can Anna solve the murder case whilst dealing with her own personal demons? Or is someone from the past planning to get in her way?”