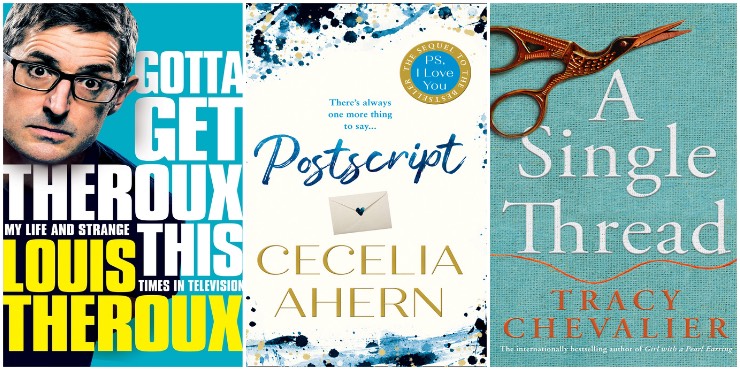 We’re always adding great titles to our eLibrary. We’ve listed some of our favourite new eBooks on OverDrive for October to help you choose your next digital read.

The Confession, by Jessie Burton

“One winter’s afternoon on Hampstead Heath in 1980, Elise Morceau meets Constance Holden and quickly falls under her spell. Connie is bold and alluring, a successful writer whose novel is being turned into a major Hollywood film. Elise follows Connie to LA, a city of strange dreams and swimming pools and late-night gatherings of glamorous people.

“But whilst Connie thrives on the heat and electricity of this new world where everyone is reaching for the stars and no one is telling the truth, Elise finds herself floundering. When she overhears a conversation at a party that turns everything on its head, Elise makes an impulsive decision that will change her life forever.

“Three decades later, Rose Simmons is seeking answers about her mother, who disappeared when she was a baby. Having learned that the last person to see her was Constance Holden, a reclusive novelist who withdrew from public life at the peak of her fame, Rose is drawn to the door of Connie’s imposing house in search of a confession…”

Before the Coffee Gets Cold by Toshikazu Kawaguchi & Geoffrey Trousselot (trans.)

“What would you change if you could go back in time?

“In a small back alley in Tokyo, there is a café which has been serving carefully brewed coffee for more than one hundred years. But this coffee shop offers its customers a unique experience: the chance to travel back in time.

“In Before the Coffee Gets Cold, we meet four visitors, each of whom is hoping to make use of the café’s time-travelling offer, in order to: confront the man who left them, receive a letter from their husband whose memory has been taken by early onset Alzheimer’s, to see their sister one last time, and to meet the daughter they never got the chance to know.

“But the journey into the past does not come without risks: customers must sit in a particular seat, they cannot leave the café, and finally, they must return to the present before the coffee gets cold…”

Gotta Get Theroux This: my life and strange times in television, by Louis Theroux

“In 1994 fledgling journalist Louis Theroux was given a one-off gig on Michael Moore’s TV Nation, presenting a segment on apocalyptic religious sects. Gawky, socially awkward and totally unqualified, his first reaction to this exciting opportunity was panic. But he’d always been drawn to off-beat characters, so maybe his enthusiasm would carry the day. Or, you know, maybe it wouldn’t…

“In Gotta Get Theroux This, Louis takes the reader on a joyous journey from his anxiety-prone childhood to his unexpectedly successful career. Nervously accepting the BBC’s offer of his own series, he went on to create an award-winning documentary style that has seen him immersed in the weird worlds of paranoid US militias and secretive pro-wrestlers, get under the skin of celebrities like Max Clifford and Chris Eubank and tackle gang culture in San Quentin prison, all the time wondering whether the same qualities that make him good at documentaries might also make him bad at life.

“As Louis woos his beautiful wife Nancy and learns how to be a father, he also dares to take on the powerful Church of Scientology. Just as challenging is the revelation that one of his old subjects, Jimmy Savile, was a secret sexual predator, prompting him to question our understanding of how evil takes place. Filled with wry observation and self-deprecating humour, this is Louis at his most insightful and honest best.”

Once a Spy, by Mary Jo Putney

“Wearied by his years as a British intelligence officer, Simon Duval resigns his commission after Napoleon’s abdication. Hoping to find new meaning in his life, he returns to England, where he discovers his cousin’s widow, Suzanne Duval, the Comtesse de Chambron. Working as a seamstress, living in reduced circumstances, Suzanne has had a life as complicated as Simon’s. While both believe they are beyond love, their sympathetic bond leads him to propose a marriage of companionship, and Suzanne accepts.

“She didn’t want or expect a true marriage, but as Suzanne joins Simon in a search for his long missing foster brother, warmth and caring begin to heal both their scars — and a powerful passion sparks between them. Then news from France threatens to disrupt their happiness. Napoleon has escaped from Elba and Wellington personally asks Simon to help prevent another devastating war. Only this time, Simon does not go into danger alone. He and Suzanne will face deadly peril together, and pray that love will carry them through…”

I Love the Bones of You: my father and the making of me, by Christopher Eccleston

“Be it as Nicky Hutchinson in Our Friends In The North, Maurice in The A Word, or his reinvention of Doctor Who, one man, in life and death, has accompanied Christopher Eccleston every step of the way – his father Ronnie.

“In I Love The Bones Of You, Eccleston unveils a vivid portrait of a relationship that has shaped his entire career trajectory, mirroring and defining his own highs and lows, from stage and screen triumph to breakdown, anorexia, self-doubt, and a deep belief in the basic principles of access and equality denied to generations. The actor reveals how his background in Salford, and vision of a person, like millions, denied their true potential, shaped his desire to make drama forever entwined with the marginalised, the oppressed, and the outsider.

“Movingly, and in scenes sadly familiar to increasing numbers, Eccleston also describes how the tightening grip of dementia on his father slowly blinded him to his son’s existence, forcing a new and final chapter in their connection, and how ‘Ronnie Ecc’ still walks alongside him today.

“Told with trademark honesty and openness, I Love The Bones Of You is a celebration of those on whom the spotlight so rarely shines, as told by a man who found his voice in its glare. A love letter to one man, and a paean to many.”

“It’s been seven years since Holly Kennedy’s husband died – six since she read his final letter, urging Holly to find the courage to forge a new life. She’s proud of all the ways in which she has grown and evolved. But when a group inspired by Gerry’s letters, calling themselves the PS, I Love You Club, approaches Holly asking for help, she finds herself drawn back into a world that she worked so hard to leave behind. Reluctantly, Holly begins a relationship with the club, even as their friendship threatens to destroy the peace she believes she has achieved.

“As each of these people calls upon Holly to help them leave something meaningful behind for their loved ones, Holly will embark on a remarkable journey – one that will challenge her to ask whether embracing the future means betraying the past, and what it means to love someone forever…”

“Operation Chastise, the destruction of the Mohne and Eder dams in north-west Germany by the RAF’s 617 Squadron on the night of 16/17 May 1943, was an epic that has passed into Britain’s national legend. Max Hastings grew up embracing the story, the classic 1955 movie and the memory of Guy Gibson, the 24-year-old wing-commander who led the raid. In the 21st Century, however, he urges that we should see the Dambusters in much more complex shades.

“The aircrew’s heroism was entirely real, as was the brilliance of Barnes Wallis, inventor of the ‘bouncing bombs’. But commanders who promised their young fliers that success could shorten the war fantasised as ruthlessly as they did about the entire bomber offensive.”

A Single Thread, by Tracy Chevalier

“It is 1932, and the losses of the First World War are still keenly felt. Violet Speedwell, mourning for both her fiancé and her brother and regarded by society as a ‘surplus woman’ unlikely to marry, resolves to escape her suffocating mother and strike out alone.

“A new life awaits her in Winchester. Yes, it is one of draughty boarding-houses and sidelong glances at her naked ring finger from younger colleagues; but it is also a life gleaming with independence and opportunity. Violet falls in with the broderers, a disparate group of women charged with embroidering kneelers for the Cathedral, and is soon entwined in their lives and their secrets. As the almost unthinkable threat of a second Great War appears on the horizon Violet collects a few secrets of her own that could just change everything…”