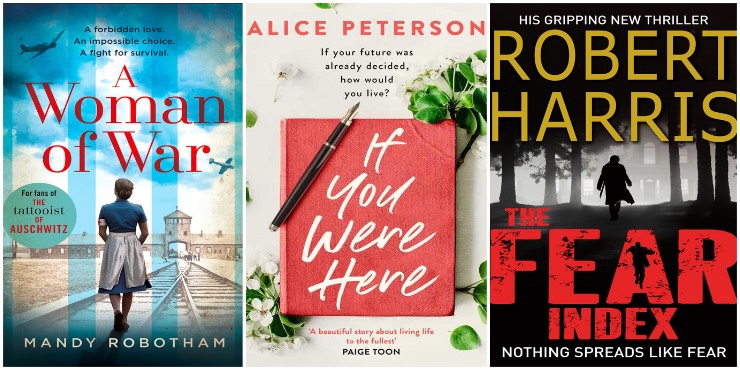 We’re always adding great titles to our eLibrary. We’ve listed some of our favourite new eBooks on OverDrive for June to help you choose your next digital read.

“Tess’s happy childhood memories are mostly of the grandmother who helped raise her. And now she has a secret to tell Iris - one which will turn so many lives upside down. But how can you confide your future in someone who barely remembers her past?

“Tess knows everything is about to change. What she doesn’t know is that chance will lead her into the lives of two strangers - and uncover her grandmother’s secret from the past. A secret which will illuminate her own future…”

If You Were Here, by Alice Peterson

“When her daughter Beth dies suddenly, Peggy Andrews is left to pick up the pieces and take care of her granddaughter Flo. But sorting through Beth’s things reveals a secret never told: Beth was sick, with the same genetic condition that claimed her father’s life, and now Peggy must decide whether to keep the secret or risk destroying her granddaughter’s world.

“Five years later, Flo is engaged and moving to New York with her fiancé. Peggy never told her what she discovered, but with Flo looking towards her future, Peggy realises it’s time to come clean and reveal that her granddaughter’s life might also be at risk.

“As Flo struggles to decide her own path, she is faced with the same life-altering questions her mother asked herself years before: if a test could decide your future, would you take it?”

A Duke Changes Everything, by Christy Carlyle

“Nicholas Lyon gambled his way into a fortune and ownership of the most opulent, notorious gentlemen’s club in England. But when Nick’s cruel brother dies, he inherits a title he never wanted. The sooner Nick is rid of the estate that has always haunted him, the sooner he can return to the life he’s built in London. But there’s one obstacle — the exquisite Thomasina Thorne.

“When the new heir to the Tremayne dukedom suddenly appears in Mina Thorne’s life, she’s flustered. Not only is he breathtakingly handsome, but he’s also determined to take away her home and position as steward of the Enderley estate. If Mina learns what makes the enigmatic duke tick, perhaps she can change his mind — as long as she doesn’t get too close to him.

“With each day Nick spends with Mina, his resolve weakens as their colliding wills lead to explosive desire. Could she be the one woman who can help him finally bury the ghosts of his past?”

The Trick to Time, by Kit De Waal

“Mona is a young Irish girl in the big city, with the thrill of a new job and a room of her own in a busy boarding house. On her first night out in 1970s Birmingham, she meets William, a charming Irish boy with an easy smile and an open face. They embark upon a passionate affair, a whirlwind marriage - before a sudden tragedy tears them apart.

“Decades later, Mona pieces together the memories of the years that separate them. But can she ever learn to love again?”

“Humiliated by a man who held her career in his hands, Dana Diaz’s life and reputation are in tatters. Drowning her sorrows one night in a bar, she gets speaking to a stranger, Amanda – and finds that she, too, has a story to tell. Over a drink, Amanda proposes a plan. The women should take revenge on each other’s behalf. Stalking and tormenting the people that wronged them carries a thrill – and one act of revenge soon leads to another.

“But while this may be an addictive game for two, only one can survive. Who will be the last woman standing?”

The Fear Index, by Robert Harris

“Meet Alex Hoffmann: among the secretive inner circle of the ultra-rich, he is something of a legend.

“Based in Geneva, he has developed a revolutionary system that has the power to manipulate financial markets. Generating billions of dollars, it is a system that thrives on panic - and feeds on fear.

“And then, in the early hours of one morning, while he lies asleep, a sinister intruder breaches the elaborate security of his lakeside home.

The Butterfly Box, by Santa Montefiore

“Federica is moved from Chile to Cornwall when her parents separate, and all she has left of the relationship she cherished with her father is a wooden box which has a secret beauty hidden within.

“Swiftly embraced into the eccentric Appleby family, it isn’t long before Federica falls for her friend’s older brother Sam, who barely notices the little girl until it is too late…

“Years later, from the sanctuary of a seemingly perfect marriage, Federica embarks on a painful journey of self-discovery. Will she finally learn the true lesson of the butterfly box?”

A Woman of War, by Mandy Robotham

“Germany, 1944. Taken from the camps to serve the Führer himself, Anke Hoff is assigned as midwife to one of Hitler’s inner circle. If she refuses, her family will die.

“Torn between her duty as a caregiver and her hatred for the Nazi regime, Anke is swept into a life unlike anything she’s ever known – and she discovers that many of those at the Berghof are just as trapped as she is. And soon, she’s falling for a man who will make her world more complicated still…

“Before long, the couple is faced with an impossible choice – and the consequences could be deadly. Can their forbidden love survive the horrors of war? And, more importantly, will they?”