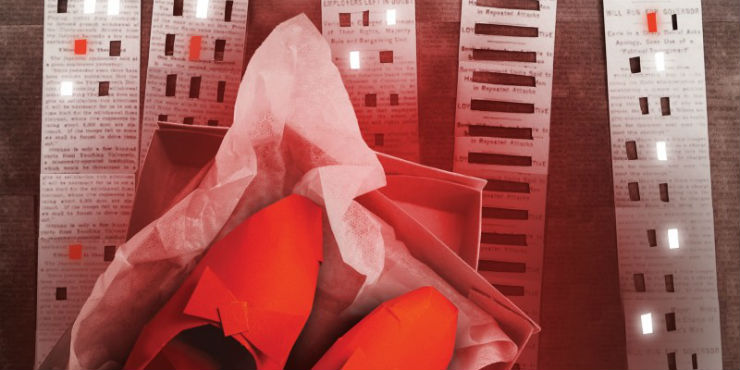 Beyond black by Hilary Mantel

While most of us know Mantel for her Booker Prize-winning Wolf Hall and Bring Up the Bodies, this novel is a modern-day, fantastical and mysterious tale of men long-dead and the terrors of the next life. We follow Alison Hart, a travelling medium whose waking hours are plagued by spirits.

The ruby slippers by Keir Alexander

Old Rosa, the bag lady, shuffles along the streets of New York, stinking, silent and shunned by all. Time and again her nephew, Michael Marcinkus, has tried to help – but she remains unknowable, hushed inside her hulk. On the day of the St. Patrick’s Day Parade, she is in a terrible accident. As she lies in a coma, Mr. Marcinkus visits her squalid flat and unearths something remarkable from the monstrous piles of junk: two glittering pieces of Hollywood history.

Love and freindship and other delusions by Beth Andrews

Isabel and her daughter Marianne attend the theatre in Bury St Edmunds and encounter Isabel’s old friend, Laura Lindsay, who gives her journal to Marianne to read. It is a revelation to the younger woman as she reads of one hilarious madcap romantic escapade after another. There is love at first sight, marriage the same day, the befriending of another young woman as romantic as Laura herself, exaggerated sentiment and complete disregard for the feelings of others. Havoc inevitably ensues. This is Jane Austen retold by retaining her huge capacity for laughter and enjoyment of the absurd.

Aren’t we sisters? by Patricia Ferguson

Lettie teaches married women about contraception. Her job is technically legal, but the things that the typed, unsigned letters that arrive at Lettie’s office ask her to do certainly aren’t.

The quickening maze by Adam Foulds

Booker Prize-shortlisted book inspired by the discovery that Septimus Tennyson and John Clare were both incarcerated in Epping Forest’s High Beach Asylum, its lyricism points to the significance of nature for both Clare and Foulds himself.

The diary of a nobody by George and Weedon Grossmith

Anxious, accident-prone and occasionally waspish, Charles Pooter has come to be seen as an epitome of English suburban life. The world he inhabits is hilariously and painfully familiar in its small-mindedness and essential decency.

Me talk pretty one day by David Sedaris

David Sedaris moved from New York to Paris where he attempted to learn French. His teacher, a sadist, declared that every day spent with him was like giving birth the Caesarean way! These hilarious essays were inspired by that move.

The last days of Rabbit Hayes by Anna McPartlin

Moving and funny. This is a book that will make you laugh and make you cry.

Through deep friendships and love lost and found, from the peace marches of the fifties and the flowering of the swinging sixties, to the rise of Thatcher and the battle for gay rights, to the spectre of a new war, this is a powerful portrait of Britain through the life of one very singular woman.