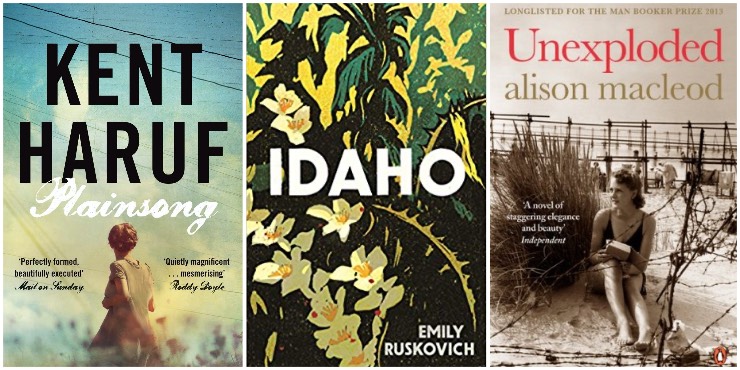 The House by the Lake: Berlin, one house, five families, a hundred years of history, by Thomas Harding

“In the summer of 1993, Thomas Harding travelled to Germany with his grandmother to visit a small house by a lake on the outskirts of Berlin. It had been her ‘soul place’ as a child, she said - a holiday home for her and her family, but much more - a sanctuary, a refuge. In the 1930s, she had been forced to leave the house, fleeing to England as the Nazis swept to power. The trip, she said, was a chance to see it one last time, to remember it as it was. But the house had changed.

“Nearly twenty years later Thomas returned to the house. It was government property now, derelict, and soon to be demolished. It was his legacy, one that had been loved, abandoned, fought over - a house his grandmother had desired until her death. Could it be saved? And should it be saved?

“The House by the Lake is a history of Germany over a tumultuous century, told through the story of a small wooden house.”

“Set in Holt, Colorado, a small town east of Denver, this tale brings together the stories of a high school teacher raising his two boys alone, a pregnant teenager with nowhere to live, and two elderly bachelors farming on the outskirts of town.”

A former Radio 4 Book of the Week.

“On Chapel Sands is a book of mystery and memoir.”

This book has already been well-received by many book groups.

“One hot August day a family drives to a mountain clearing to collect birch wood. Jenny, the mother, is in charge of lopping any small limbs off the logs with a hatchet. Wade, the father, does the stacking. The two daughters, June and May, aged nine and six, drink lemonade, swat away horseflies, bicker, sing snatches of songs as they while away the time. But then something unimaginably shocking happens, an act so extreme it will scatter the family in every different direction.

“In a story told from multiple perspectives and in razor-sharp prose, we gradually learn more about this act, and the way its violence, love and memory reverberate through the life of every character in Idaho.”

The Woman in the Window, by A. J. Finn

Hitchcockian suspense in the style of Rear Window.

“It’s been ten long months since Anna Fox last left her home. Ten months during which she has haunted the rooms of her old New York house like a ghost, lost in her memories, too terrified to step outside. Anna’s lifeline to the real world is her window, where she sits day after day, watching her neighbours.

“When the Russells move in, Anna is instantly drawn to them. A picture-perfect family of three, they are an echo of the life that was once hers. But one evening, a frenzied scream rips across the silence, and Anna witnesses something no one was supposed to see. Now she must do everything she can to uncover the truth about what really happened. But even if she does, will anyone believe her? And can she even trust herself?”

This was a huge bestseller so some people may have already read it. You should find plenty of copies though.

“There are three things you should know about Elsie. The first thing is that she’s my best friend. The second is that she always knows what to say to make me feel better. And the third thing - might take a little bit more explaining.

“84-year-old Florence has fallen in her flat at Cherry Tree Home for the Elderly. As she waits to be rescued, Florence wonders if a terrible secret from her past is about to come to light; and, if the charming new resident is who he claims to be, why does he look exactly a man who died 60 years ago?”

The House of the Spirits, by Isabel Allende

“Spanning four generations, Isabel Allende’s family saga is populated by a memorable, often eccentric, cast of characters. Together, men and women, spirits, the forces of nature and of history, converge in a brlliantly realised novel.”

Read our Meet the Author interview with Isabel Allende →

I read this recently. It hurtles along at a good rate and has a great twist at the end. This would certainly spark discussion.

“The Pope is dead. Behind the locked doors of the Sistine Chapel, 118 Cardinals from all over the globe will cast their votes in the world’s most secretive election. They are holy men. But they have ambition. And they have rivals. Over the next 72 hours one of them will become the most powerful spiritual figure on Earth.”

“May, 1940. On Park Crescent, Geoffrey and Evelyn Beaumont and their eight-year-old son, Philip, anxiously await news of the expected enemy landing on the beaches of Brighton.

“It is a year of tension and change. Geoffrey becomes Superintendent of the enemy alien camp at the far reaches of town, while Philip is gripped by the rumour that Hitler will make Brighton’s Royal Pavilion his English HQ. As the rumours continue to fly and the days tick on, Evelyn struggles to fall in with the war effort and the constraints of her role in life, and her thoughts become tinged with a mounting, indefinable desperation.

“Then she meets Otto Gottlieb, a ‘degenerate’ German-Jewish painter and prisoner in her husband’s internment camp. As Europe crumbles, Evelyn’s and Otto’s mutual distrust slowly begins to change into something else, which will shatter the structures on which her life, her family and her community rest. Love collides with fear, the power of art with the forces of war, and the lives of Evelyn, Otto and Geoffrey are changed irrevocably.”

Officially classified as a Young Adult title but don’t let that put you off. This is an important book that will take you out of your comfort zone.

“Starr Carter’s world is shattered when she is the only witness to the fatal shooting of her unarmed best friend, Khalil, by a police officer. Now what Starr says could destroy her community. It could also get her killed.”