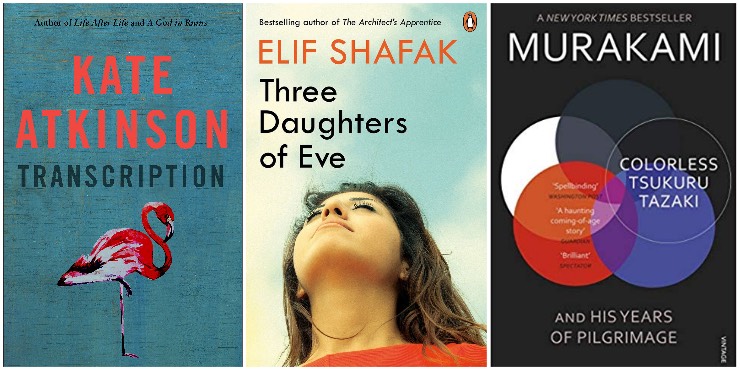 Kate Atkinson is a bestselling author best known for her books featuring Jackson Brodie, which have been serialised on TV.

“In 1940, 18-year old Juliet Armstrong is reluctantly recruited into the world of espionage. Sent to an obscure department of MI5 tasked with monitoring the comings and goings of British Fascist sympathisers, she discovers the work to be by turns both tedious and terrifying. But after the war has ended, she presumes the events of those years have been relegated to the past for ever.

“Ten years later, now a producer at the BBC, Juliet is unexpectedly confronted by figures from her past. A different war is being fought now, on a different battleground, but Juliet finds herself once more under threat. A bill of reckoning is due, and she finally begins to realise that there is no action without consequence.”

“Peri, a wealthy Turkish housewife, is on her way to a dinner party at a seaside mansion in Istanbul when a beggar snatches her handbag. As she wrestles to get it back, a photograph falls to the ground - an old polaroid of three young women and their university professor. A relic from a past - and a love - Peri had tried desperately to forget.

“The photograph takes Peri back to Oxford University, as an eighteen year old sent abroad for the first time. To her dazzling, rebellious Professor and his life-changing course on God. To her home with her two best friends, Shirin and Mona, and their arguments about Islam and femininity. And finally, to the scandal that tore them all apart.”

The Tattooist of Auschwitz, by Heather Morris

“This novel is based on the true story of Lale and Gita Sokolov, two Slovakian Jews, who survived Auschwitz and eventually made their home in Australia. In that terrible place, Lale was given the job of tattooing the prisoners marked for survival - literally scratching numbers into his fellow victims’ arms in indelible ink to create what would become one of the most potent symbols of the Holocaust.”

“Some memories are too powerful to live only in the past. During a ferocious storm, a red-haired stranger appears in the garden of a small farming cottage. Eliza and her parents take him in. But very soon, it’s clear he has no intention of leaving.

“A century later, Mary and Graham have experienced every parent’s worst nightmare. Now, escaping their old London life, the memories and the headlines, they have found an idyllic new home in rural Suffolk.

“A cottage, a beautiful garden. The perfect place to forget. To move on. But in The Stopped Heart, the past never dies.”

The Stone Circle, by Elly Griffiths

Elly Griffiths is one of the most popular authors in Suffolk libraries and when a new book is published we get long waiting lists. The Stone Circle is one of her Dr Ruth Galloway stories.

“DCI Nelson has been receiving threatening letters telling him to ‘go to the stone circle and rescue the innocent who is buried there’. He is shaken, not only because children are very much on his mind, with Michelle’s baby due to be born, but because although the letters are anonymous, they are somehow familiar. They read like the letters that first drew him into the case of The Crossing Places, and to Ruth. But the author of those letters is dead. Or are they?

“Meanwhile Ruth is working on a dig in the Saltmarsh - another henge, known by the archaeologists as the stone circle - trying not to think about the baby. Then bones are found on the site, and identified as those of Margaret Lacey, a 12-year-old girl who disappeared 30 years ago. As the Margaret Lacey case progresses, more and more aspects of it begin to hark back to that first case of The Crossing Places.”

A History of Britain in 21 Women: a personal selection, by Jenni Murray

“Britain has been defined by its conflicts, its conquests, its men and its monarchs. To say that it’s high time that it was defined by its women falls some way short of an understatement. Jenni Murray, the long-time presenter of Woman’s Hour on BBC Radio 4, draws together the lives twenty-one women to shed light upon a variety of social, political, religious and cultural aspects of British history.”

Philip Pullman revisits his fictional universe in the first volume of The Book of Dust. It helps if you have read the Northern Lights trilogy, but this can be read as a standalone as the events covered in this book precede that series. As a reader you have to immerse yourself in Pullman’s world and literally follow the stream.

“In high school, Tsukuru Tazaki belonged to an extremely tight-knit group of friends who pledged to stay together forever. But when Tsukuru returns home from his first year of college in Tokyo, he finds that they want nothing to do with him. Something has changed, but nobody will tell him what - and he never sees them again.

“Years later, Tsukuru has become a successful engineer, but is also something of a loner. It is only when he begins dating an older woman named Sara that he confesses the story of this mysterious betrayal and the shadow it has cast over his life. She becomes convinced that Tsukuru must track down his old group to try to answer the question that has haunted him all these years, creating a hole inside of him - why did they suddenly turn on him?”

Adults in the Room: my battle with Europe’s deep establishment, by Yanis Varoufakis

Perhaps an unusual non-fiction choice for a book club, but a few of our groups have read it.

“What happens when you take on the establishment? In this blistering, personal account, world-famous economist Yanis Varoufakis blows the lid on Europe’s hidden agenda and exposes what actually goes on in its corridors of power.

“Varoufakis sparked one of the most spectacular and controversial battles in recent political history when, as finance minister of Greece, he attempted to re-negotiate his country’s relationship with the EU. Despite the mass support of the Greek people and the simple logic of his arguments, he succeeded only in provoking the fury of Europe’s political, financial and media elite.

“But the true story of what happened is almost entirely unknown - not least because so much of the EU’s real business takes place behind closed doors.”

The Girls, by Emma Cline

“California. The summer of 1969. In the dying days of a floundering counter-culture a young girl is unwittingly caught up in unthinkable violence, and a decision made at this moment, on the cusp of adulthood, will shape her life.

“Evie Boyd is desperate to be noticed. In the summer of 1969, empty days stretch out under the California sun. The smell of honeysuckle thickens the air and the sidewalks radiate heat. Until she sees them. The snatch of cold laughter. Hair, long and uncombed. Dirty dresses skimming the tops of thighs. Cheap rings like a second set of knuckles. The girls. And at the centre, Russell. Russell and the ranch, down a long dirt track and deep in the hills. Incense and clumsily strummed chords. Rumours of sex, frenzied gatherings, teen runaways.

“Was there a warning, a sign of things to come? Or is Evie already too enthralled by the girls to see that her life is about to be changed forever?”