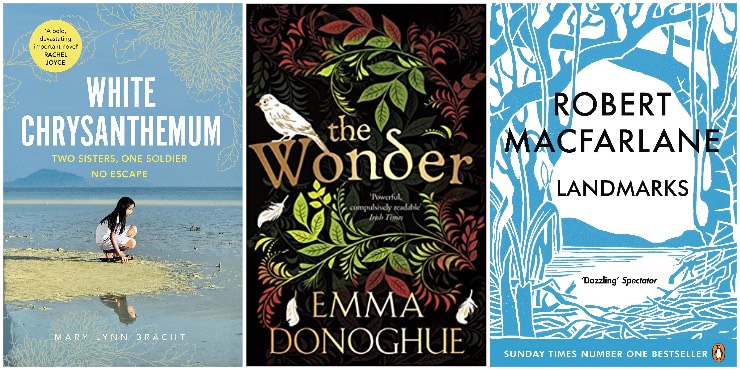 Ruth Jones, acclaimed writer of TV’s Gavin and Stacey, makes her debut with a witty and wise story of life’s second chances and the dangers of taking them.

Kate meets an older married man, Callum, and they begin an affair. Years later they meet up again…

The Great Level, by Stella Tillyard

“In 1649 Dutch engineer Jan Brunt arrives in Ely to begin the great endeavour of levelling and draining the Fens. His life and work are bound by order, measurement and science. England is in the throes of Civil War and Cromwell’s troops are amassing, yet the real danger for him is water and the many labyrinthine channels that encompass the Great Level. Then one day lost on the level he spies a Fenswoman and everything he thought he knew starts to unravel.

“Many years later, now a distinguished gentleman in Nieuw Amsterdam in the bustling hubbub of the New World, Jan receives a note, unsigned.

The Wonder, by Emma Donoghue

“An eleven-year-old girl stops eating, but remains miraculously alive and well. A nurse, sent to investigate whether she is a fraud, meets a journalist hungry for a story.

“Set in the Irish Midlands in the 1850s, The Wonder - inspired by numerous European and North American cases of ‘fasting girls’ between the 16th and the 20th centuries - is a psychological thriller about a child’s murder threatening to happen in slow motion before our eyes. Pitting all the seductions of fundamentalism against sense and love, it is a searing examination of what nourishes us, body and soul.”

A Discovery of Witches, by Deborah Harkness

“When Diana Bishop opens an alchemical manuscript, it’s an intrusion of magic into her life. Though she is a witch of impeccable lineage, the death of her parents while she was a child convinced her that human fear is more potent than witchcraft. Now Diana has exposed herself to a world she’s kept at bay for years.”

The novel behind the successful Sky One series.

“Hana and her little sister Emi are part of an island community of haenyo, women who make their living from diving deep into the sea off the southernmost tip of Korea. One day Hana sees a Japanese soldier heading for where Emi is guarding the day’s catch on the beach. Her mother has told her again and again never to be caught alone with one. Terrified for her sister, Hana swims as hard as she can for the shore. So begins the story of two sisters suddenly and violently separated by war.

“Switch-backing between Hana in 1943 and Emi as an old woman today, White Chrysanthemum takes us into a dark and devastating corner of history. But pulling us back into the light are two women whose love for one another is strong enough to triumph over the evils of war.”

The Sisters Brothers, by Patrick deWitt

“The Sisters Brothers is an offbeat Western about a reluctant assassin and his murderous brother who are on the trail of a man named Hermann Kermit Warm. On the way, the brothers have a series of unsettling and violent experiences in the Darwinian landscape of Gold Rush America.”

Conversations with Friends, by Sally Rooney

“Frances is twenty-one years old, cool-headed, and darkly observant. A college student in Dublin and aspiring writer, she works at a literary agency by day. At night, she performs spoken word with her best friend Bobbi, who used to be her girlfriend.

“When they are profiled by Melissa, a well-known journalist, they enter an exotic orbit of beautiful houses, raucous dinner parties and holidays in Provence. Initially unimpressed, Frances finds herself embroiled in a risky ménage a quatre when she begins an affair with Nick, Melissa’s actor husband.

“Desperate to reconcile herself to the desires and vulnerabilities of her body, Frances’s intellectual certainties begin to yield to something new - a painful and disorienting way of living from moment to moment.”

Everything I Know About Love, by Dolly Alderton

“A spot-on, wildly funny and sometimes heartbreaking book about growing up, growing older and navigating all kinds of love along the way.

“When it comes to the trials and triumphs of becoming a grown up, journalist and former Sunday Times dating columnist Dolly Alderton has seen and tried it all. In her memoir, she vividly recounts falling in love, wrestling with self-sabotage, finding a job, throwing a socially disastrous Rod Stewart-themed house party, getting drunk, getting dumped, realising that Ivan from the corner shop is the only man you’ve ever been able to rely on, and finding that that your mates are always there at the end of every messy night out.”

“Words are grained into our landscapes, and landscapes are grained into our words. Landmarks is about the power of language to shape our sense of place. It is a field guide to the literature of nature, and a glossary containing thousands of remarkable words used in England, Scotland, Ireland and Wales to describe land, nature and weather.”