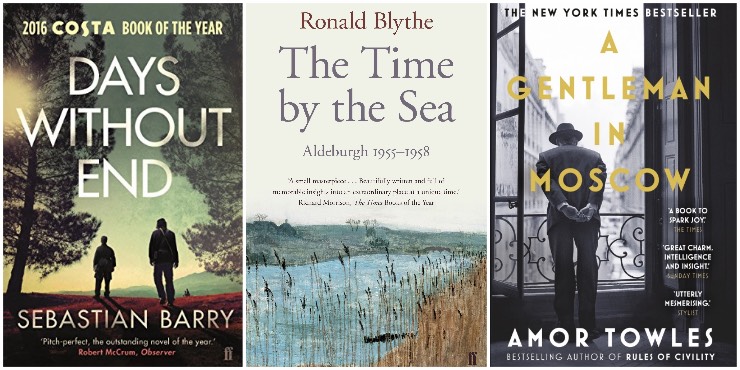 A Life in the Day: memories of sixties London, lots of writing, The Beatles and my beloved wife, by Hunter Davies

Hunter Davies looks back on life in the swinging sixties and his friendship with the Beatles.

“The Pope is dead. Behind the locked doors of the Sistine Chapel, 118 Cardinals from all over the globe will cast their votes in the world’s most secretive election. They are holy men. But they have ambition. And they have rivals. Over the next 72 hours one of them will become the most powerful spiritual figure on Earth.”

Fast-paced thriller from a master storyteller.

Everyone Brave is Forgiven, by Chris Cleave

Powerful story of bravery and friendship.

“When war is declared, Mary North leaves finishing school unfinished, goes straight to the War Office, and signs up. Tom Shaw decides to give it a miss - until his flatmate Alistair unexpectedly enlists, and the conflict can no longer be avoided.

“Young, bright and brave, Mary is certain she’d be a marvelous spy. When she is - bewilderingly - made a teacher, she instead finds herself defying prejudice to protect the children her country would rather forget. Tom, meanwhile, finds that he will do anything for Mary. And when Mary and Alistair meet, it is love, as well as war, that will test them in ways they could not have imagined, entangling three lives in violence and passion, friendship and deception, and inexorably shaping their hopes and dreams.”

“The Time by the Sea is about Ronald Blythe’s life in Aldeburgh during the 1950s. He had originally come to the Suffolk coast as an aspiring young writer, but found himself drawn into Benjamin Britten’s circle and began working for the Aldeburgh Festival. Although befriended by Imogen Holst and by E.M. Forster, part of him remained essentially solitary, alone in the landscape while surrounded by a stormy cultural sea. But this memoir gathers up many early experiences, sights and sounds.”

The Hours Before Dawn, by Celia Fremlin

Psychological thrillers are not a new phenomenon. It is difficult to believe this was written in 1958.

“Louise Henderson is a young housewife and mother, trying her best to tend to a husband, two small daughters and a constantly crying baby. Her fatigue is such that she fears she is nearing psychosis; and she can’t help but feel that a new lodger in the house, a seemingly respectable schoolmistress, poses a threat to her and her family.”

Everything Under, by Daisy Johnson

Dark and unsettling novel from the youngest author to be shortlisted for the Booker Prize.

“Words are important to Gretel, always have been. As a child, she lived on a canal boat with her mother, and together they invented a language that was just their own. She hasn’t seen her mother since the age of sixteen, though - almost a lifetime ago - and those memories have faded. Now she works as a lexicographer, updating dictionary entries, which suits her solitary nature.

“A phone call from the hospital interrupts Gretel’s isolation and throws up questions from long ago. She begins to remember the private vocabulary of her childhood. She remembers other things, too: the wild years spent on the river; the strange, lonely boy who came to stay on the boat one winter; and the creature in the water - a canal thief? - swimming upstream, getting ever closer. In the end there will be nothing for Gretel to do but go back.”

Grief is the Thing with Feathers, by Max Porter

Spellbinding debut novel from Max Porter. A shortish read for your group at 128 pages.

“In a London flat, two young boys face the unbearable sadness of their mother’s sudden death. Their father, a Ted Hughes scholar and scruffy romantic, imagines a future of well-meaning visitors and emptiness.

“In this moment of despair they are visited by Crow - antagonist, trickster, healer, babysitter. This self-described sentimental bird is attracted to the grieving family and threatens to stay until they no longer need him. As weeks turn to months and physical pain of loss gives way to memories, this little unit of three begin to heal.”

The Dry, by Jane Harper

Page-turning mystery that will keep you guessing. This debut novel was a huge bestseller.

“Amid the worst drought to ravage Australia in a century, it hasn’t rained in small country town Kiewarra for two years. Tensions in the community become unbearable when three members of the Hadler family are brutally murdered. Everyone thinks Luke Hadler, who committed suicide after slaughtering his wife and six-year-old son, is guilty.

“Policeman Aaron Falk returns to the town of his youth for the funeral of his childhood best friend, and is unwillingly drawn into the investigation. As questions mount and suspicion spreads through the town, Falk is forced to confront the community that rejected him 20 years earlier. Because Falk and Luke Hadler shared a secret, one which Luke’s death threatens to unearth. And as Falk probes deeper into the killings, secrets from his past and why he left home bubble to the surface as he questions the truth of his friend’s crime.”

A Gentleman in Moscow, by Amor Towles

A novel about a man who is ordered to spend the rest of his life inside a luxury hotel. Plenty of humour and a fascinating cast of characters.

“In 1922 Count Rostov is deemed an unrepentant aristocrat by a Bolshevik tribunal. He is sentenced to house arrest in The Metropol, a grand hotel across the street from the Kremlin.

“Rostov, an indomitable man of erudition and wit, has never worked a day in his life, and must now live in an attic room while some of the most tumultuous decades in Russian history are unfolding outside the hotel’s doors. Unexpectedly, his reduced circumstances provide him a doorway into a much larger world of emotional discovery.”