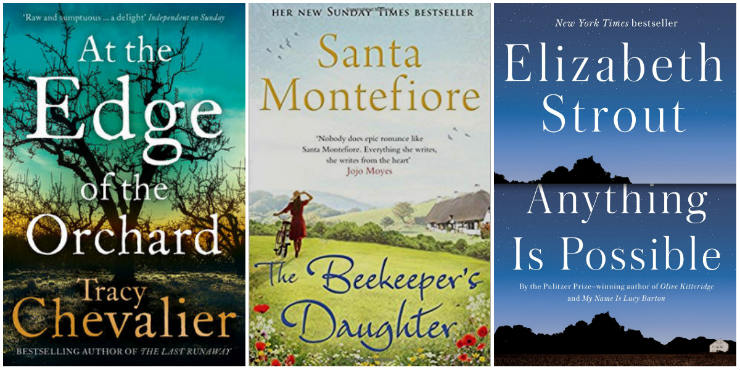 Anything is Possible, by Elizabeth Strout

“Years ago, Lucy Barton, a successful New York writer, spent time in hospital, with her mother at the foot of her bed to keep her company. Avoiding the distance between them, they spoke at length about people from their home town, the rural, dusty town of Amgash, Illinois.

“Writing these stories, Lucy imagines the lives of the people that she especially remembers. And the people she has imagined that, in small ways, have remembered her too. For isn’t it true that we all hope to be remembered? Or to think in some way - even fleetingly - that we have been important to someone?”

At the Edge of the Orchard, by Tracy Chevalier

“Ohio, 1838. James and Sadie Goodenough have settled in the Black Swamp, planting apple trees to claim the land as their own. Life is harsh in the swamp, and as fever picks off their children, husband and wife take solace in separate comforts. James patiently grows his sweet-tasting ‘eaters’ while Sadie gets drunk on applejack made fresh from ‘spitters’. Their fighting takes its toll on all of the Goodenoughs - a battle that will resonate over the years and across America.”

The Dreams of Bethany Mellmoth, by William Boyd

“A philandering art dealer tries to give up casual love affairs - seeking only stolen kisses as a substitute. A man recounts his personal history through the things he has stolen from others throughout his life. A couple chart the journey of their five year relationship backwards, from awkward reunion to lovelorn first encounter. And, at the heart of the book, a 24-year old young woman, Bethany Mellmoth, embarks on a year-long journey of wishful and tentative self-discovery.”

A collection of short stories from William Boyd that you can either drop in and out of or read them all.

So Long, See You Tomorrow, by William Maxwell

A high quality short novel that shows how children can be impacted by traumatic events in their families.

“Duneen is a quiet place, far enough from the big towns to have kept its own rhythms. Its residents include castdown policeman PJ who lives a lonely, uneventful life punctuated only by the next meal - until now; the beautiful and mysterious family of three spinster sisters each with their own secrets and sorrows; and of course, the town’s gossip who think she knows the answers.

“When a grim discovery is made on a building site up by the old school, it becomes the catalyst for long buried secrets and rivalries to come to light and this silent, once innocent and repressed-seeming town is revealed to have a much darker, hungrier undertow.”

The Bookshop, by Penelope Fitzgerald

“Florence Green opens a bookshop in a small coastal town in East Anglia. She does so in spite of polite but ruthless opposition. Eventually she has to battle against supernatural as well as natural forces to achieve her ends.”

A fascinating picture of small town life in the 1970s, inspired by Southwold, which was recently made into a film starring Emily Mortimer.

Our second Tracy Chevalier title. If you’ve read or seen Othello the story will be familiar, but the tragedy has been transplanted to a school in 1970s Washington DC in this reimagining.

“She noticed him before anyone else. Arriving at his fourth school in six years, diplomat’s son Osei Kokote knows he needs an ally if he is to survive his first day - so he’s lucky to hit it off with Dee, the most popular girl in school.

“But one student can’t stand to witness this budding relationship: Ian decides to destroy the friendship between the black boy and the golden girl. By the end of the day, the school and its key players - teachers and pupils alike - will never be the same again.”

The Beekeeper’s Daughter, by Santa Montefiore

Epic romantic trilogy from one of our bestselling authors.

“England, 1932: Grace Hamblin is growing up in a rural idyll. The beekeeper’s daughter, she knows her place and her future - that is until her father dies and leaves her alone. Alone, that is, except for one man who she just can’t shake from her thoughts.

“Massachusetts, 1973: Grace’s daughter Trixie Valentine is in love with an unsuitable boy. He’s wild and romantic, and in a band that might be going somewhere. But when tragedy strikes and he has to go home to England, he promises to come back to Trixie one day, if only she will wait for him.

“Both mother and daughter are searching for love and happiness, unaware of the secrets that bind them. To find what they are longing for they must confront the secrets of the past, and unravel the lies told long ago.”

The Power, by Naomi Alderman

Winner of the 2017 Baileys Women’s Prize for Fiction. The premise is that girls find that with a flick of their fingers, they can inflict agonizing pain and even death. What if the power to hurt were in women’s hands?

The Lake House, by Kate Morton

“June, 1933: the Edevane family’s country house, Loeanneth, is polished and gleaming, ready for the much-anticipated Midsummer Eve party. Alice Edevane, 16 years old and a budding writer, is especially excited. Not only has she worked out the perfect twist for her novel, she’s also fallen helplessly in love with someone she shouldn’t.

“But by the time midnight strikes and fireworks light up the night skies, the Edevane family will have suffered a loss so great that they leave Loeanneth forever.”