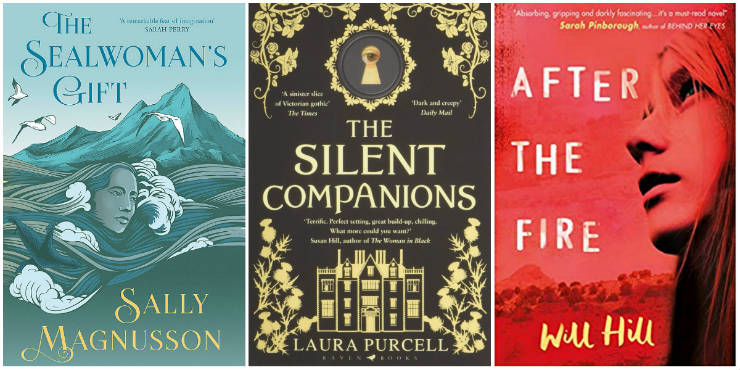 The Reader, by Bernhard Schlink

Schlink explores questions of guilt, deceit, betrayal and memory in this novel which traces the relationship between a German lawyer, Michael, and an older woman, Hanna, who was formerly a guard at a satellite camp attached to Auschwitz. This was made into a film starring Kate Winslet.

The Silent Companions, by Laura Purcell

Recent Meet the Author interviewee Laura Purcell scored a big hit with this book and went on to win WHSmith’s Thumping Good Read. In subject matter, it is similar to Susan Hill’s The Woman in Black.

The Maltese Falcon, by Dashiell Hammett

Perhaps a surprising choice for a book group, but if you are going to read one novel of this type you may as well read the best. Dorothy Parker, who was never a pushover, is said to have read this novel 30 or 40 times.

Inspired by Virginia Woolf’s Mrs Dalloway and Judy Blume’s Forever, Release is one day in the life of Adam Thorn, 17. It’s a big day. Things go wrong. It’s intense, and all the while, weirdness approaches…

“Adam Thorn is having what will turn out to be the most unsettling, difficult day of his life, with relationships fracturing, a harrowing incident at work, and a showdown between this gay teen and his preacher father that changes everything. It’s a day of confrontation, running, sex, love, heartbreak, and maybe, just maybe, hope. He won’t come out of it unchanged.

“And all the while, lurking at the edges of the story, something extraordinary and unsettling is on a collision course.”

The Sealwoman’s Gift, by Sally Magnusson

“In 1627 Barbary pirates raided the coast of Iceland and abducted some 400 of its people, including 250 from a tiny island off the mainland. Among the captives sold into slavery in Algiers were the island pastor, his wife and their three children.

“Although the raid itself is well documented, little is known about what happened to the women and children afterwards. It was a time when women everywhere were largely silent. In this reimagining, Sally Magnusson gives a voice to Asta, the pastor’s wife.”

“But there are lies behind Father John’s words. Outside, there are different truths.

“Then came the fire.”

The Illusion of Separateness, by Simon Van Booy

I read this one recently and can recommend it. It is not a long book but it will get your group thinking about how we are all connected in many ways.

“Award-winning author Simon Van Booy tells a harrowing and enchanting story of how one man’s act of mercy during World War II changed the lives of strangers, and how they each discover the astonishing truth of their connection.”

I’ve put this one on the list as I am fascinated at what your groups will make of it. The blurb is a bit off-putting, but once you start reading the book, you’ll find it accessible even if you don’t quite understand what you are grappling with. If you want something to challenge your group and make them think, this is the one to pick.

“Flights, which was awarded Poland’s biggest literary prize in 2008, is a novel about travel in the twenty-first century and human anatomy. From the seventeenth century, we have the story of the real Dutch anatomist Philip Verheyen, who dissected and drew pictures of his own amputated leg, discovering in so doing the Achilles tendon.”

Into the Water, by Paula Hawkins

Follow-up to The Girl on the Train. I have heard varying reports about this one. Some people loved it, but others thought it was confusing with too many characters. As this is an ex-bestseller, you should find plenty of copies to borrow.

Conversations with Friends, by Sally Rooney

This one is well on the way to becoming a modern classic.

“Frances is twenty-one years old, cool-headed, and darkly observant. A college student in Dublin and aspiring writer, she works at a literary agency by day. At night, she performs spoken word with her best friend Bobbi, who used to be her girlfriend.

“When they are profiled by Melissa, a well-known journalist, they enter an exotic orbit of beautiful houses, raucous dinner parties and holidays in Provence. Initially unimpressed, Frances finds herself embroiled in a risky ménage a quatre when she begins an affair with Nick, Melissa’s actor husband.

“Desperate to reconcile herself to the desires and vulnerabilities of her body, Frances’s intellectual certainties begin to yield to something new - a painful and disorienting way of living from moment to moment.”

Searching for Caleb, by Anne Tyler

This was Anne Tyler’s sixth novel. We get waiting lists whenever she brings out a new book. When you read this, you will realise why she is so popular.

“A story about a family’s search for its deepest roots. The story moves through the years, from the ragtime era at the end of the 19th century to small town America in the mid 1970s.”