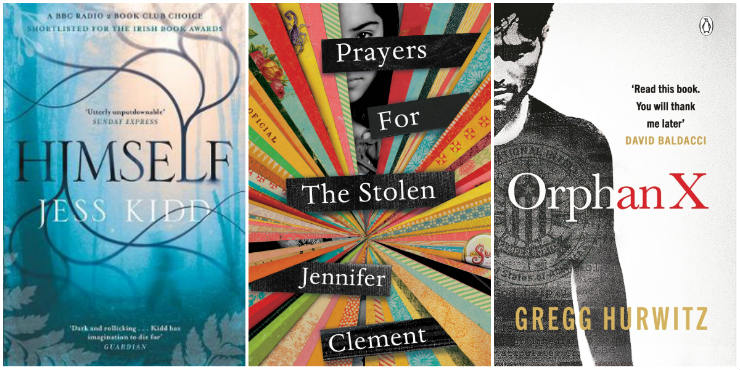 Himself, by Jess Kidd

“1950. A teenage girl is brutally murdered in a forest. But, somehow, her baby survives. 1976. A mysterious and charming young man returns to the remote coastal village of Mulderrig, seeking answers about the mother who, it was said, had abandoned him on the steps of a Dublin orphanage. With the help of its oldest and most eccentric inhabitant, he will force the village to give up its ghosts. Nothing, not even the dead, can stay buried forever.”

In this magic realist murder mystery set in rural Ireland, the dead play as important a part as the living. It is wonderfully inventive and very funny in places, with wonderful characters you will remember after you have read it. Fans of Agatha Christie and Under Milk Wood should approve.

Prayers for the Stolen, by Jennifer Clement

“The Narcos only had to hear there was a pretty girl around and they’d sweep onto our lands in black SUVs and carry the girl off. Not one of the stolen girls had ever come back, except for Paula. She came back a year after she’d been kidnapped. She held a baby bottle in one hand. She wore seven earrings that climbed the cupped edge of her left ear in a line of blue, yellow, and green studs and a tattoo that snaked around her wrist. ‘Did you see that? Did you see Paula’s tattoo? My mother said. You know what that means, right? Jesus, Mary’s son and Son of God, and the angels in heaven protect us all.’ At the time, I didn’t know what that meant. But I was going to find out.”

The plight of poor young women in Mexico is probably not something that has crossed your radar. Beautiful girls are stolen by the drug cartels and never come back, so mothers so to great lengths to protect them, hiding them and cutting their hair to look like boys. This is a harsh story which will not be to everyone’s taste, but there is plenty of black humour amongst the daily struggle for survival.

A Little Life by Hanya Yanagihara

“When four graduates from a small Massachusetts college move to New York to make their way, they’re broke, adrift, and buoyed only by their friendship and ambition. There is kind, handsome Willem, an aspiring actor; JB, a quick-witted, sometimes cruel Brooklyn-born painter seeking entry to the art world; Malcolm, a frustrated architect at a prominent firm; and withdrawn, brilliant, enigmatic Jude, who serves as their centre of gravity.

“Over the decades, their relationships deepen and darken, tinged by addiction, success, and pride. Yet their greatest challenge, each comes to realize, is Jude himself, by midlife a terrifyingly talented litigator yet an increasingly broken man, his mind and body scarred by an unspeakable childhood, and haunted by what he fears is a degree of trauma that he’ll not only be unable to overcome - but that will define his life forever.”

Heartbreaking and very moving, this Booker-nominated book will stay with you long after you have finished it. There are 700+ pages, which do not make it an easy read, but it is well worth sticking with it.

“‘Do you need my help?’ It was always the first question he asked. They called him when they had nowhere else to turn. As a boy he was chosen, then taken from the orphanage he called home. Raised and trained as part of a top secret programme, he was sent to the worst places in the world to do the things his government denied any knowledge of.

“Then he broke with the programme, using everything he’d learned to disappear. He wanted to help the desperate and deserving. But now someone’s on his tail. Someone who has issues with his past. Someone who knows he was once known simply as Orphan X.”

This 2016 title helped to establish Gregg Hurwitz as a thriller-writing superstar. If you are one of Lee Child’s legions of fans in Suffolk, I would strongly recommend this adrenaline-fuelled, exciting story.

If you like this, you’ll want to read the sequel, The Nowhere Man.

See What I Have Done, by Sarah Schmidt

“When her father and step-mother are found brutally murdered on a summer morning in 1892, Lizzie Borden - 32-years-old and still living at home - immediately becomes a suspect. But after a notorious trial, she is found innocent, and no one is ever convicted of the crime.

“Meanwhile, others in the claustrophobic Borden household have their own motives and their own stories to tell: Lizzie’s unmarried older sister, a put-upon Irish housemaid, and a boy hired by Lizzie’s uncle to take care of a problem.”

There are not many writers who would attempt to re-imagine the Lizzy Borden story as a psychological thriller, particularly for their debut novel. Everyone knows the story … or do they? The Michigan couple were brutally murdered with an axe and all eyes fell on the youngest daughter, Lizzie Borden. Did she do it? This one will keep you guessing.

Together, by Julie Cohen

“On a morning that seems just like any other, Robbie wakes in his bed, his wife Emily asleep beside him, as always. He rises and dresses, makes his coffee, feeds his dogs, just as he usually would. But then he leaves Emily a letter and does something that will break her heart. As the years go back all the way to 1962, Robbie’s actions become clearer as we discover the story of a couple with a terrible secret - one they will do absolutely anything to protect.”

As recommended by Erin Kelly in her recent Meet the Author interview.

“ary: Henry Fraser was 17 years old when a tragic accident severed his spinal cord. Paralysed from the shoulders down, he has conquered unimaginable difficulty to embrace life and a new way of living. Through challenging adversity, he has found the opportunity to grow and inspire others.

You may have seen Henry Fraser on The Jonathan Ross Show recently. Through challenging adversity, he has found the opportunity to grow and inspire others. This is a book everyone should read, as it makes you look at the world differently whatever difficulties you are dealing with.

Sweet Caress: the many lives of Amory Clay, by William Boyd

“Amory’s first memory is of her father standing on his head. She has memories of him returning on leave during the First World War. But his absences, both actual and emotional, are what she chiefly remembers. It is her photographer uncle Greville who supplies the emotional bond she needs, and, when he gives her a camera and some rudimentary lessons in photography, unleashes a passion that will irrevocably shape her future.

“In this enthralling story of a life fully lived, William Boyd has created a sweeping panorama of some of the most defining moments of modern history, told through the camera lens of one unforgettable woman, Amory Clay.”

I highly recommend this fictional autobiography of a photographer and war correspondent who has a phenomenal, panoramic life.

Everything I Never Told You, by Celeste Ng

“Lydia is the favourite child of Marilyn and James Lee; a girl who inherited her mother’s bright blue eyes and her father’s jet-black hair. Her parents are determined that Lydia will fulfill the dreams they were unable to pursue - in Marilyn’s case that her daughter become a doctor rather than a homemaker, in James’s case that Lydia be popular at school, a girl with a busy social life and the centre of every party.

“But Lydia is under pressures that have nothing to do with growing up in 1970s small town Ohio. When Lydia’s body is found in the local lake, James is consumed by guilt and sets out on a reckless path that may destroy his marriage.”

This debut novel is small but perfectly formed. Celeste Ng’s new novel, Little Fires Everywhere is bound to become a book club favourite once the queue has calmed down.

The Keeper of Lost Things, by Ruth Hogan

“Once a celebrated author of short stories now in his twilight years, Anthony Peardew has spent half his life lovingly collecting lost objects, trying to atone for a promise broken many years before. Realising he is running out of time, he leaves his house and all its lost treasures to his assistant Laura, the one person he can trust to fulfil his legacy and reunite the thousands of objects with their rightful owners.

“But the final wishes of the Keeper of Lost Things have unforeseen repercussions which trigger a most serendipitous series of encounters.”

This was chosen as a Richard & Judy title and would make a good film.