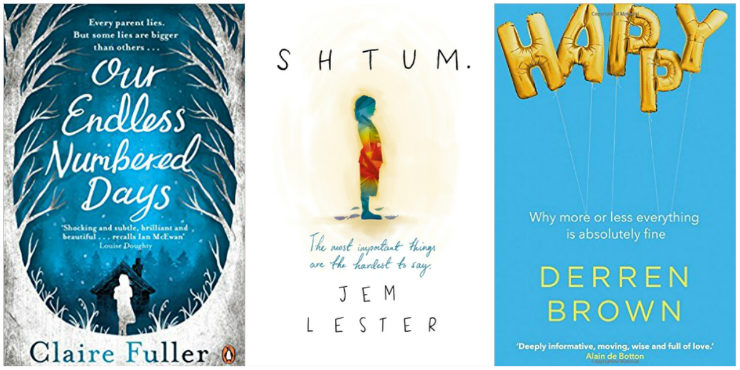 Award-winning debut novel in which a lonely man adopts a one-eyed dog and travels the wilds of Ireland.

This is an extraordinary and heartbreaking debut. The writing is beautiful and poetic. If you have ever been to Ireland you will recognise the people, the roads and the small towns. Once you have read this you will almost certainly read another of Sara Baume’s books.

Sara recently discussed this book and her latest title in her Meet the Author interview.

The Darkest Hour, by Barbara Erskine

In the summer of 1940, eyes are focussed on the skies above the South of England. The Battle of Britain has just begun but Evie Lucas has eyes for no-one but a dashing young pilot called Tony. Evie has a glittering career as an artist ahead of her but seems only to be fascinated in sketching portraits of him.

70 years later, recently widowed art historian Lucy is putting the pieces of her life back together, and to do that she needs to uncover the mystery surrounding a painting in her home. As Lucy ties up the loose ends of one lifetime, she stirs up a hornet’s nest of history in another. Suddenly, Lucy finds herself in danger from people past and present who have no intention of letting an untold truth ever surface.

The Darkest Hour was described as ‘gripping’ by a group who recently borrowed it.

1960s–1980s: A young girl is taken to a secret hideout in the woods by her father and told the world is going to end. Die Hutte is a special place that only her father knows about and a place which will keep them safe when the world comes to an end.

At first the adventure is like something from a fairytale, but as she and her father venture deeper into the woods and further from civilisation, their path becomes more isolating and remote. Like Hansel and Gretel, they venture further and further into danger and isolation. The journey starts and ends in London, and the reader has to follow the clues to try to solve what really happened at Die Hutte.

Our Endless Numbered Days picked up the 2015 Desmond Elliott Prize for debut fiction.

The Watchmaker of Filigree Street, by Natasha Pulley

“In 1883, Thaniel Steepleton returns to his tiny flat to find the lock picked and a gold pocketwatch on his pillow. But he has worse fears than generous burglars; he is a telegraphist at the Home Office, which has just received a threat for what could be the largest-scale Fenian bombing in history.

“When the watch saves Thaniel’s life in a blast that destroys Scotland Yard, he goes in search of its maker, Keita Mori - a kind, lonely immigrant who sweeps him into a new world of clockwork and music. Although Mori seems harmless at first, a chain of slips soon proves that he must be hiding something.”

This isn’t for everyone. If you like Sherlock Holmes with a dose of fantasy like The Night Circus by Erin Morgenstern thrown in you will probably ‘get’ this one. If your preference is for something with a beginning, a middle and an end this may frustrate you. It will certainly get people talking though!

The Legacy of Elizabeth Pringle, by Kirsty Wark

Firstly, yes it is the same Kirsty Wark and secondly, she writes very well.

Elizabeth Pringle has left her house, Holmlea, and belongings to a stranger, a young mother she used to watch cooing to her child, pushing a pram down the road more than 30 years ago. Now Martha, the baby in that pram, tries to find out why her mother inherited the house in such strange circumstances.

An epic book on a grand scale but one that manages not to be too demanding. In short, a perfect book group read.

Burnt Shadows looks at how the people of Afghanistan and Pakistan have been portrayed since the upsurge of the Taliban. There is also a reminder of the risks migrants will take to get away from their war-torn countries.

Gold Fame Circus is set in California where the water has run dry. This dystopian novel follows Luz and Ray and a strange toddler called Ig who comes into their lives. A story of survival and hope against all odds.

This first novel, published in 2016, will appeal to fans of Cormac McCarthy, Annie Proulx and Margaret Atwood.

The Sense of an Ending, by Julian Barnes

“When we are young, we want emotions to be like what we read in books” says Tony Webster. Tony runs a second hand camera store while leading a mostly benign life – rising daily at 7:00am, coffee with his ex-wife, and running errands for his pregnant daughter.

One day a certified letter arrives notifying him that he has been named in the Last Will and Testament of the mother of a girl he dated while at university and he is forced to rethink his current situation in life.

This is going to be a major film soon so get in early before everyone jumps on.

Ben Jewell has hit breaking point. His ten-year-old son Jonah has severe autism and Ben and his wife, Emma, are struggling to cope. When Ben and Emma fake a separation in order to further Jonah’s case in an upcoming tribunal, Ben and Jonah move in with Georg, Ben’s elderly father. In a small house in North London, three generations of men - one who can’t talk; two who won’t - are thrown together.

Our only non-fiction choice this time. Most people will know Derren Brown as a TV magician but he also has a deep interest in philosophy and the Stoics. With his professional interest in sleight of hand and illusions, he is mindful of the tricks used by the massive self-help industry. He is especially scathing about cosmic ordering. His approach is to take control of the stories we tell ourselves.

I found myself reading and re-reading sections because it really makes you think. The last section about death was heavy going but there is plenty here to make it worth the investment of your time.