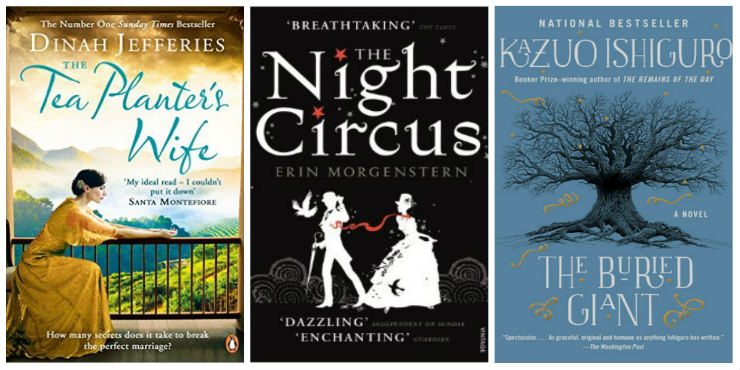 Nineteen-year-old Gwendolyn Hooper is newly married to a rich and charming widower, eager to join him on his tea plantation, and determined to be the perfect wife and mother. But life in 1920s Ceylon is not what Gwen had expected. Left on her own expecting twins Gwen is faced with a difficult decision which leaves her hiding a heartbreaking secret which could destroy her marriage.

The Night Circus: A Novel by Erin Morgenstern

In 1886 a mysterious travelling circus becomes an international sensation. Open only at night, constructed entirely in black & white, Le Cirque des Reves delights all who wander its circular paths. The story of The Night Circus begins with two magicians who both have different ideas on the best way to train an apprentice in the art of magic. They agree to a challenge and decide to pit their trainees against each other in a game that will take years to complete, a challenge that only one of them will survive.

This is one that I think will divide your group. You will either lose yourself in the magical world of the book or throw it aside!

The Buried Giant by Kazuo Ishiguro

Ishiguro presents us with a fantasy vision of post-Roman Britain, complete with mythical figures, dragons, ogres and pixies. Axl and Beatrice set off across a troubled land of mist and rain in the hope of finding a son they have not seen for years. Their journey will reveal to them dark and forgotten corners of their love for one another.

This is very different from Ishiguro’s other books which is an advantage or a disadvantage depending on your point of view.

London, November, 1960: the Cold War is at its height. Spy fever fills the newspapers, and the political establishment knows how and where to bury its secrets. When a highly sensitive file goes missing, Simon Callington is accused of passing information to the Soviets, and arrested. His wife, Lily, suspects that his imprisonment is part of a cover-up, and that more powerful men than Simon will do anything to prevent their own downfall. She knows that she too is in danger, and must fight to protect her children. But what she does not realise is that Simon has hidden vital truths about his past, and may be found guilty of another crime that carries with it an even greater penalty.

This is a story about secrets, the power they have over us and the cost of keeping them. Helen Dunmore writes beautifully and there is plenty of tension to keep the story racing along.

The Lemon Table by Julian Barnes

Julian Barnes has always been a book club favourite. Arthur & George is one of the most read book club titles.

This collection brings together eleven stories written over 10 years, 6 of which were originally published in The New Yorker, and the remainder in venues such as Granta and the TLS.

Originally titled Rage and Age, Barnes has said that these stories were intended to counter the notion that life calms down or gets serene in old age. If you have never read Julian Barnes this is a good starting place. The stories are about ageing and death, but Barnes displays his customary wit and imagination.

The Invention of Wings by Sue Monk Kidd

Fictionalised account of the life of real-life 19th century slavery abolitionist Sarah Grimke. The book tells the story of two young women, one an ambitious white young woman, the other a feisty black slave who is determined not to accept her lot in life. I have not read this myself but I have heard excellent reports of it.

The Gustav Sonata by Rose Tremain

It is the tutor who tells the young Gustav that he must try to be more like a coconut - that he needs a hard shell to protect the softness inside. This is what his native Switzerland has perfected - a shell to protect its neutrality, to keep its people safe. But his beloved friend, Anton, doesn’t want to be safe - a gifted pianist, he longs to make his mark on the world outside.

On holiday one summer in Davos, the boys stumble across a remote building. Long ago, it was a TB sanitorium; now it is wrecked and derelict. Here, they play a game of life and death, deciding which of their imaginary patients must burn. It becomes their secret. The Gustav Sonata begins in the 1930s, under the shadow of the Second World War, and follows the boys into maturity, and middle age, where their friendship is tested as never before.

If you have never read anything by Rose Tremain I would strongly urge you to start. There is hardly a wasted word throughout. This is writing of the highest quality.

Everyone Brave is Forgiven by Chris Cleave

A love story bubbles up through the devastation of London and Malta in the Second World War. Everyone Brave is inspired by the lives of the author’s grandfather, who served in Malta, and his grandmother, who drove ambulances during the Blitz. At 440 plus pages it is an ambitious read but well worth the effort.

I must be in a minority as I never read To Kill A Mockingbird but I thoroughly enjoyed this one.

The novel is set during the mid-1950s and features many of the characters from To Kill a Mockingbird some 20 years before. Scout (Jean Louise Finch) has returned to Maycomb from New York to visit her father Atticus. She is forced to grapple with issues both personal and political as she tries to understand both her father’s attitude toward society, and her own feelings about the place where she was born and spent her childhood.

Harper Lee writes in a gentle fashion, painting memorable pictures of her characters. Here is part of her description of Scout’s father Atticus:

“On some days he wore two watches: he wore two this day, an ancient watch and chain his children had cut their teeth on, and a wristwatch. The former was habit, the latter was used to tell time when he could not move his fingers enough to dig in his watch pocket. He had been a big man before age and arthritis reduced him to medium size.”

I loved this one. It makes you think of your own relationship with aged parents. People often overlook Harper Lee’s humour but it is funny too.

The Road To Little Dribbling: more notes from a small island by Bill Bryson

Our only non-fiction choice this time round. If you are hoping for another Notes from a Small Island it is not quite that but there are several inspired moments that remind you nobody does mocking the Brits as well as Bryson. It is also educational as he tells you little known facts about places he visits. There are a few ‘hobbyhorse’ moments I could have done without but it is well worth a read. He doesn’t pull his punches either and there are several places where he won’t be invited to switch on the Christmas lights anytime soon.