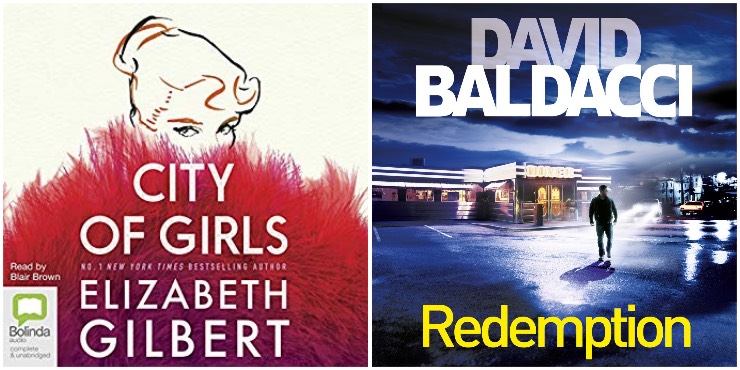 “In Slough House memories are stirring, all of them bad. Catherine Standish is buying booze again, Louisa Guy is raking over the ashes of lost love, and new recruit Lech Wicinski is determined to discover who destroyed his career.

“Meanwhile, in Regent’s Park, Diana Taverner’s tenure as First Desk is running into difficulties. If she’s going to make the Service fit for purpose, she might have to make deals with a familiar devil. And with winter taking its grip, Jackson Lamb would sooner be left brooding in peace, but even he can’t ignore the dried blood on his carpets. So when the man responsible breaks cover, Lamb sends the slow horses out to even the score.”

The Life of Death, by Lucy Booth, read by Cathleen McCarron

“Elizabeth Murray has been condemned to burn at the stake when a strange man visits her. He offers her a deal: her soul in return for immortality. What he offers is not a normal life. To survive, Elizabeth must become Death. Elizabeth must ease the passing of all those who die, using her compassion to guide them.

“She accepts and, for 500 years, whirls from one death to the next. Until one day, everything changes. She, Death, falls in love. Desperate to escape from her deal, she summons the man who saved her. He agrees to release her on the condition that she gives him five lives. These five lives she must take herself.”

City of Girls, by Elizabeth Gilbert, read by Blair Brown

“It is the summer of 1940. 19-year-old Vivian Morris arrives in New York with her suitcase and sewing machine, exiled by her despairing parents. Although her quicksilver talents with a needle and commitment to mastering the perfect hair roll have been deemed insufficient for her to pass into her sophomore year of Vassar, she soon finds gainful employment as the self-appointed seamstress at the Lily Playhouse, her unconventional Aunt Peg’s charmingly disreputable Manhattan revue theatre. There, Vivian quickly becomes the toast of the showgirls, transforming the trash and tinsel only fit for the cheap seats into creations for goddesses.

“Exile in New York is no exile at all: here in this strange wartime city of girls, Vivian and her girlfriends mean to drink the heady highball of life itself to the last drop.”

Those Who Are Loved, by Victoria Hislop, read by Juliet Stevenson

“Themis grows up during the brutal German occupation of Greece. In the subsequent Civil War, the country is polarised between Right and Left and Themis’ family is bitterly divided.

“During the violent five-year struggle for control of the country, she fights for Communists and is seduced by the leader of her rebel band. Captured and sent to the notoriously cruel islands of exile, Makronisos and Trikeri, Themis gives birth to a son, Angelos.”

Machines Like Me, by Ian McEwan, read by Billy Howle

“Britain has lost the Falklands war, Margaret Thatcher battles Tony Benn for power and Alan Turing achieves a breakthrough in artificial intelligence. In a world not quite like this one, two lovers will be tested beyond their understanding.

“Machines Like Me occurs in an alternative 1980s London. Charlie, drifting through life and dodging full-time employment, is in love with Miranda, a bright student who lives with a terrible secret. When Charlie comes into money, he buys Adam, one of the first batch of synthetic humans. With Miranda’s assistance, he co-designs Adam’s personality. This near-perfect human is beautiful, strong and clever - a love triangle soon forms. These three beings will confront a profound moral dilemma.”

“A man waits at a London airport for Ingrid Ostermann, the love of his life, to arrive. Across the Atlantic, a retired NYPD cop waits in a bar in Florida’s Key West for his first date with the lady who is, without question, his soul mate. The two men are about to discover they’ve been scammed out of almost every penny they have in the world - and that neither woman exists.

“Meanwhile, a wealthy divorcée plunges, in suspicious circumstances, from an apartment block in Munich. In the same week, Detective Superintendent Roy Grace is called to investigate the suicide of a woman in Brighton that is clearly not what it seems. As his investigations continue, a handsome Brighton motivational speaker comes forward. He’s discovered his identity is being used to scam eleven different women online. The first he knew of it was a phone call from one of them, out of the blue, saying, ‘You don’t know me, but I thought I knew you’. That woman is now dead.

“Roy Grace realizes he is looking at the tip of an iceberg. A global empire built on clever, cruel internet scams and the murder of anyone who threatens to expose them.”

The Department of Sensitive Crimes, by Alexander McCall Smith, read by Saul Reichlin

“Ulf Varg works in Malmo’s Department of Sensitive Crimes. Like all Scandinavian detectives he has his issues. In his case these include his unresolved feelings for his colleague, Anna; his impatience over the seeming incompetence of his irritating colleague Blomquist; and his concerns for the health of his hearing-impaired dog, Marten, the only dog in Sweden (and possibly all Scandinavia) who is able to lip-read (in Swedish).

“Along with his colleagues, Ulf is called upon to investigate a bizarre attack on a market trader, the disappearance of a handsome man who may or may not exist, and the affairs of a variety of young female students whose relationships with one another leave a great deal to be desired.

“Ulf and his team come to realise that the world is a puzzling place, lycanthropy (were-wolfism) exists and fish might have something to teach us. There is so much to learn if you are a Swedish detective, and in the first book in this new quasi-Scandinavian series, Ulf Varg embarks on these lessons with spirit and good humour.”

“Amos Decker and his FBI partner Alex Jamison are visiting his hometown of Burlington, Ohio, when he’s approached by an unfamiliar man. But he instantly recognises the man’s name: Meryl Hawkins. He’s the first person Decker ever arrested for murder back when he was a young detective. Though a dozen years in prison have left Hawkins unrecognisably aged and terminally ill, one thing hasn’t changed: he maintains he never committed the murders. Could it be possible that Decker made a mistake all those years ago?

“As he starts digging into the old case, Decker finds a startling connection to a new crime that he may be able to prevent, if only he can put the pieces together quickly enough…”

“Twenty-five million dollars in cartel gold lies hidden beneath a mansion on the Miami Beach waterfront. Ruthless men have tracked it for years. Leading the pack is Hans-Peter Schneider. Driven by unspeakable appetites, he makes a living fleshing out the violent fantasies of other, richer men.

“Cari Mora, caretaker of the house, has escaped from the violence in her native country. She stays in Miami on a wobbly Temporary Protected Status, subject to the iron whim of ICE. She works at many jobs to survive. Beautiful, marked by war, Cari catches the eye of Hans-Peter as he closes in on the treasure. But Cari Mora has surprising skills, and her will to survive has been tested before. Monsters lurk in the crevices between male desire and female survival.”